“Bitch” has a bark that’s far worse than its bite.

It’s an ambitious film, to be sure, one that aims to address the familiar phenomenon of domestic malaise through a bold allegory: An overworked, underappreciated wife and mother snaps one day and starts acting like a ferocious dog. She runs around naked on all fours in the basement, growling at the kids, scratching at the walls, covered in her own feces. It’s like a surreal, extreme version of “Bad Moms.”

But as director, writer and star, Marianna Palka has trouble balancing dark comedy with dire melodrama. She certainly gives it her all in front of the camera with a fearless physical performance, as evidenced by the film’s opening scene in which her character attempts suicide by hanging herself from the dining room chandelier with one of her husband’s belts. Behind the camera, though, Palka struggles to find the right tone, especially given that she’s trying to blend so many wildly different and difficult kinds of movie at once. She’s come up with an intriguing premise, but doesn’t quite have the nuance or the storytelling chops to offer an insightful satire.

Thinly drawn characters make baffling decisions, their every move punctuated by a obtrusive score that’s either edgy and jazzy or jaunty and wacky. “Bitch” veers between slapsticky comedy and weepy drama before taking a sharp turn in the third act when it finally becomes clear to everyone that Palka’s disturbed character, Jill, is in need of serious medical help, forcing a custody battle between Jill’s husband and her sister and parents.

By then, though, the film’s central metaphor has long since worn out its welcome.

It begins on an ordinary day in a comfortable neighborhood of Los Angeles, with the intermittent sound of barking dogs piercing the suburban quiet (in a rare subtle touch). Soon after Jill’s failed suicide effort, we meet the people responsible for her despondency: Her selfish husband, Bill (Jason Ritter), a philandering workaholic, and her four noisy, demanding kids. Only the eldest, Tiffany (Brighton Sharbino), has any clue that the family matriarch is depressed and deeply shaken.

Once Jill disappears and re-emerges in her canine state – leaving a trail of scattered food, urine and feces in her wake – Bill and the kids struggle to fend for themselves. Palka the filmmaker takes this to unbelievable extremes for the sake of sour laughs, including Bill’s ignorance as to where his children attend school (or that they need little things like lunch, for example). But the reaction from the kids—the youngest of whom, Cindy (Kingston Foster), is in kindergarten—to their mother’s departure from reality is bizarre. They giggle about it as if it’s a game.

Ritter also plays it broadly, which I suppose is an attempt at skewering the patriarchy for its uselessness. But what’s happened here is a serious psychotic break. Jill’s doctor and the police officers who stop by the house to check on her well being are right to suggest she’s 5150, the California Welfare and Institutions Code for someone who’s a danger to themselves or others. Bill reacts by swilling vodka straight from the bottle in the shower before dropping his wedding band down the drain. In theory, Palka wants us to laugh at the absurdity of it all, but “Bitch” increasingly leaves a foul taste.

Abruptly, though, the film takes a turn from all that bitterness when Bill finds he must fight Jill’s sister (Jaime King) and her parents for the right to care for her. After trying to challenge us for so long, it suddenly grinds to a halt and goes nice. Lost in all this, of course, is what Jill wants for herself. Theoretically, it’s to be seen, heard and loved. But Palka is off-screen for large chunks of time – and when we do see her, she’s either obscured by partial darkness or shot in extreme facial close-ups – so it’s hard to have a grasp of what Jill is going through beyond the superficiality of this gimmicky device.

Ultimately, “Bitch” ends up being about a man’s emotional evolution rather than a woman’s physical one. And that is a bitch after all. 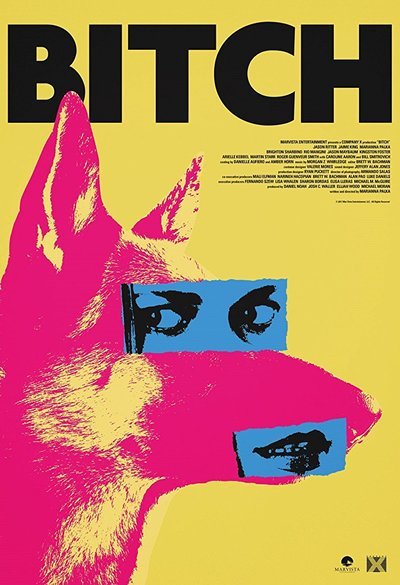