Since Rand Paul announced the "Tea Party tidal wave" in 2010, state legislatures have passed hundreds of new restrictions on abortion, chipping away at the 1973 Supreme court decision Roe v. Wade. Civia Tamarkin's workmanlike new documentary "Birthright: A War Story" looks at how these restrictions have led to an increasing criminalization of women's health. What's happening now goes far beyond the abortion debate. When an Oklahoma lawmaker—in the year 2017—refers to women as "hosts," it's a chilling glimpse of the world view shared by many. ("Under his eye, praise be," in "The Handmaid's Tale" parlance). When another lawmaker, this one from Idaho, wonders aloud—in the year 2015—if a woman could swallow a camera for a remote gynecological exam, we realize the situation. Or we should. The people in charge of making decisions about women's health do not even know that the stomach is in a different place than the uterus. This is not just about abortion anymore. This is about something else entirely.

Reviewing a documentary like "Birthright" presents its own challenges. In something like "Birthright," the message is clearly more important than how it is told. But that doesn't necessarily have to be the case. Ava DuVernay's "13th" is a powerful piece of propaganda, in the best sense of the word, but it's also a powerful piece of filmmaking in and of itself. The form it takes is as stunning and strong as the message DuVernay so urgently wants to share. "13th" is a polemic for the ages, a story so well-presented that it could legitimately change minds (if the mind weren't too closed to begin with).  The same is true of Ezra Edelman's five-part ESPN documentary "O.J. Made in America." In his careful editorial selection process from the mounds and mounds of extant footage, Edelman has crafted a gigantic exhaustive cross-section on race in America, no stone left unturned, no side left unexplored. "Birthright" tells an important story using the most uninspired form imaginable. It rarely rises above the "style" of any given program you would see on Investigation Discovery any night of the week. Tamarkin uses a parade of talking heads, their interviews interspersed with stock footage (mention of an arrest accompanied by a shot of police light whirling, just one example of many).

The documentary is broken up into a couple of different narrative strands. There are the personal stories of women who have faced prosecution for a variety of "offenses," women treated like criminals because their pregnancies did not go to term. These are heart-rending stories, told by people who are still traumatized by their experiences. When you see women getting arrested for having "suspicious" miscarriages, for being afraid to report a miscarriage because some gossipy nurse might call the cops, you see that these are not "unintended" consequences from these new abortion restrictions. These consequences are 100% intended.

Tamarkin is to be applauded for the diversity of her interview subjects. There are the women sharing their harrowing stories, but she's also included sociologists, doctors, lawyers, women's health advocates—but—crucially, I think, she has interviewed representatives from pro-life groups like National Right to Life and the "Personhood" movement. She has been very careful to not present just the one side. She has not allowed her film to be an echo chamber of identical sentiments. It is obvious Tamarkin's view on the subject. It is obvious the sense of urgency she feels. But she has allowed space for those who oppose. In an almost totally polarized environment like the one in which we live, where speakers with controversial—even ugly—views are run off of collage campuses, when the press itself is under attack constantly—it's important to maintain a commitment to the values of the First Amendment. Evelyn Beatrice Hall's famous "I disapprove of what you say, but I will defend to the death your right to say it" is alive and well in "Birthright."

One of the things that Tamarkin does very well is present the historical context for the present political reality. While it seems like this information should be a baseline of knowledge for any American, a small sequence showing young women's blundering ignorant attempts to answer the question "What is Roe v. Wade?" shows just how mistaken these assumptions are. "Doesn't that have something to do with Black History Month?" asks one young woman. Tamarkin (and her various experts) present how the pro-life movement politicized itself—spearheaded by people like Jerry Falwell—targeting state legislators with laser-like precision. This type of strategic organization is something the pro-choice movement failed to do (as one advocate fully admits). It wasn't until recently that being pro-life was considered a requirement for any Republican Party candidate. For example, Senator Prescott Bush, father to George H.W. Bush, was the National Treasurer for Planned Parenthood. (A recent article in Mother Jones exposes the Bush family's role in the rise of Planned Parenthood.) In 1967, then governor of California Ronald Reagan passed a bill making it easier for women to have legal abortions. Later, as President, he had to sing a different tune. The way Tamarkin lays out the transformation of this story on the national political level is a great educational service (especially considering her exposure in that earlier sequence that even a baseline of knowledge cannot be assumed).

"I can't believe we're still protesting this shit" is a common protest sign seen at recent marches. There's a lot that's hard to believe in "Birthright" too. When the choices a couple wants to make about how many children they want to have is now the business of the State, we're through the Looking Glass. An elderly lawyer from South Carolina, one of the many people interviewed for "Birthright", says at one point, "The State has the right to intervene in a woman's life from the second she becomes pregnant. That's an intrusion into the life of an individual that should shock every true conservative in this country." Praise be. 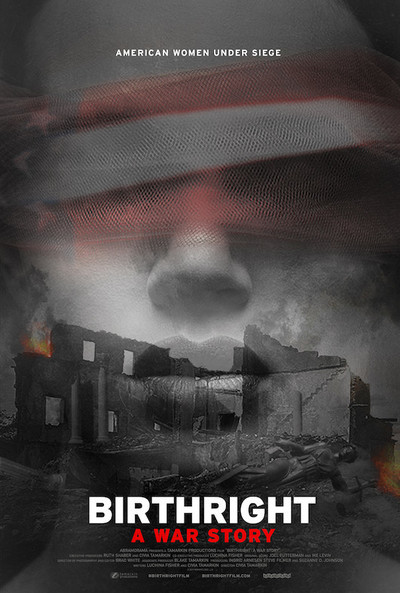