Bilal: A New Breed of Hero

“Bilal: A New Breed of Hero” is an animated story about a culture and a piece of history we don’t often see, told from a region and a perspective that’s underrepresented in mainstream film. It’s an inspiring tale based on true events with a worthwhile message about finding your voice and asserting your identity.

If only it were good.

The debut feature from director and co-writer Khurram H. Alavi (and the first film from Dubai-based Barajoun Entertainment) offers individual moments of beauty and it boasts a solid voice cast, led by Adewale Akinnuoye-Agbaje, Ian McShane and Jacob Latimore. But the character design is so stiff and unnatural that it’s frequently creepy, which is not only a distraction but also an impediment to the emotional connection the film clearly seeks. Background details can be quite lovely in their photorealism: streaks of light through an open window, the pattern on a tile floor or the tactile nature of a horse’s mane. A couple of overhead shots of massive battles in the desert stand out. But the faces resemble the results of early performance capture technology—think Robert Zemeckis’ “The Polar Express,” groundbreaking though it was—rendering them with little or no expression. And that’s a problem when “Bilal” means to stir something profound within us.

The intentions are honorable, for sure, but the execution is awkward, not just visually but tonally. In telling the (fictionalized) story of a 7th century slave who dared to follow his own beliefs and become an important figure in the Islamic faith, Alavi jumps around between action, comedy and drama in jarring fashion. And while his script (which he co-wrote with four other people, including co-director Ayman Jamal) follows the central character from the time he’s a plucky boy until he grows into a heroic man, “Bilal” is way too intense and violent for younger viewers, which seems like a missed opportunity to reach the widest possible audience.

As told here, Bilal ibn Rabah (voiced as a boy by Andre Robinson and as a teen by Latimore) was born into slavery alongside his sister, Ghufaira (China Anne McClain). When we first see him, he’s play-acting in the yard that he’s a great warrior on a makeshift horse, which Alavi intercuts with dark and ferocious imagery of a real battle on horseback. Then it’s back to happy pretend time in the sunshine. Then the kids watch tearfully as marauders strip their mother away from them. This uneasy mix of humor, suspense and violence plagues the film throughout.

Bilal is sold to Umayyah (McShane), a wealthy trader in Hejaz (which, in the present day, is the holy land in the western part of Saudi Arabia). But as he grows older (and is voiced resonantly as a man by Akinnuoye-Agbaje), he increasingly dares to voice his beliefs, which include a monotheism that seems threatening during a time when others worshipped idols. And his history of standing up to Umayyah’s one-dimensionally villainous son, Safwan (Mick Wingert), often leaves him chained, beaten, whipped and—in one particularly disturbing scene—crushed beneath a giant boulder. (Again, parents, I can’t reiterate this enough: Even though “Bilal” is animated and its clunky dialogue often overexplains everything, it is really not for kids. I’m glad I didn’t watch it with my 8-year-old son—and he’s seen “Dunkirk.”)

With the help of the warrior Hamza (Dave B. Mitchell), who becomes his trainer and guide, Bilal fights to free himself from slavery. Eventually, he becomes an inspirational figure to many, preaching the importance of equality and inclusiveness. Those words are more relevant now than ever, nearly 1,400 years later, especially when it comes to the treatment of Muslims around the world. “Bilal” makes you wish it had delivered its valuable message more elegantly. 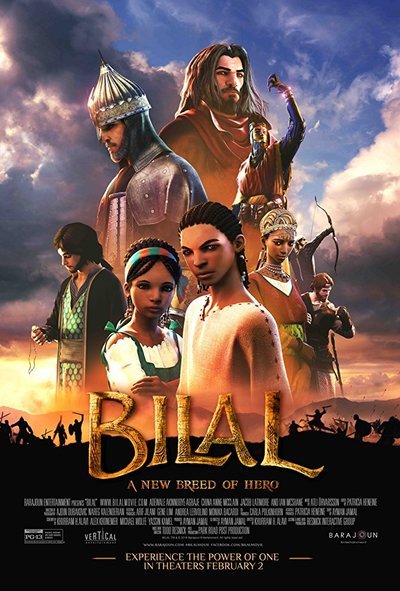 Rated PG-13 for violence/warfare and some thematic elements.