Bollywood star/producer Salman Khan is a man called India (literally) in "Bharat," a corny drama about the title character's quest to support and do right by his family in post-partition India. Khan plays Bharat, a stolid, nearly unflappable man who was separated from his father and younger sister on August, 15, 1947, the day that India gained its independence from England and was separated from modern-day Pakistan. Bharat is basically Paul Bunyan, Captain America, and Forrest Gump all rolled into one—only more Indian. He has lived many lives—as a daredevil motorcyclist, a Navy mechanic, and an oil-drilling wildcat—and each one brings out the most flattering sides of benevolent muscleman Khan, who is very much playing to type.

Bharat is surreally charismatic: he subdues gun-toting pirates by dancing like super-star Amitabh Bachchan, woos the love of his life (Katrina Kaif) by reciting poetry, and generally earns better working/living conditions for himself and his peers by delivering impassioned speeches about India's greatness. One of the main pleasures of watching "Bharat" is seeing Khan coast on his considerable charms as he and Kaif—who frequently outshines Khan, as she previously did in the goofy but winsome 2017 spy thriller "Tiger Zinda Hai"—endure, by sheer force of conviction, through several key moments in India's nation-building history. Khan isn't always strong enough to stick several big, sappy emotional moments (ie: whenever he has to do more than just smolder boyishly). But he and his co-stars are sometimes attractive enough to make the otherwise ridiculous "Bharat" seem believable.

And boy, is "Bharat" incredible: Khan's character, now middle-aged, regales his extended family's members with wild (but true enough!) tales of astonishing humble-ness in the face of changing values. In his time, Bharat recalls coming, seeing, and conquering everything he desired. First he masters and then quits a fulfilling job as an Evel Knievel-style stunt driver, but only after he realizes that a thrilling gig and an attractive partner (Disha Patani) aren't as important as the example he's setting for India's impressionable youths. Next: Bharat travels to and then flees from "somewhere in the Middle East" to make his fortune, but only after he falls in love with sassy forewoman Kumud Raina (Kaif) and rescues some inept co-workers from a deadly mining incident. Then he travels to Malta as a ship's mechanic (despite having no mechanical skills), but leaves that position after he tames the aforementioned pirates and helps his friend and constant bromantic companion Vilayati (Sunil Grover) to romance the woman of his dreams. Each episode in Bharat's life only serves to confirm his affable nature and deathless loyalty. No matter how unsolvable a given problem may seem—only he can solve it.

Khan's broad, muscular shoulders are often capable of carrying such a wide load. He's most convincing when Bharat is primarily defined by Khan's hip-waggling strut, broad pout, and appraising stare. He makes a white, bedazzled jump-suit look good; hell, Khan makes a John-Waters-style pencil mustache look good. Khan's only really unconvincing when he has to cry, beg, or exhibit any other complex emotions, as he must in a crucial scene involving one of Bharat's long-lost relative.

But for the most part, Khan is perfect as the happy-go-lucky Bharat: he's light enough on his feet, as we see in dance numbers where he commands a battalion of back-up dancers, who dutifully lift him upon their shoulders. The man is as bulky and as proud of it as Macho Man Randy Savage during his heyday, but his collaborators usually know how to bring out the best in him. There just aren't enough scenes where Khan gets to flex, since "Bharat" director Ali Abbas Zafar and co-writer Varun V. Sharma inevitably spend way too much time re-establishing their happy-go-lucky protagonist's love for Mother India. Still: there are several scenes where Khan reminds viewers that he's not only very comfortable in his own skin, but knows how to look good for the camera. Sometimes, that's more than enough.

Then again, I often wondered why Kaif wasn't given more screentime. She steals almost every scene she's in with a couple of coy winks and knowing smiles, as in an irresistible musical number where Raina convinces Bharat to talk to his mother about the possibility of being a "live-in" (ie: unmarried) couple. Kaif's joyful, commanding performance brings Rita Hayworth's show-stopping dance in "Gilda" to mind, especially when Kaif's song returns to its chorus: "Baby, come hither." Anything Khan can do, Kaif can do better, like when Raina flirts with Bharat while pretending to be a mustachioed caterer: "The sweets are ready and so am I." Khan's brand of can-do heroism is fine enough, but I don't think I'm alone in wishing that there were a lot more where Kaif's light-hearted, but commanding performance came from. 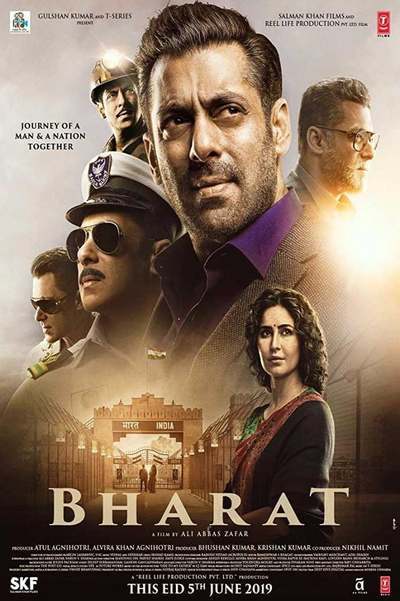