The main takeaway from "Bewakoofiyaan," the latest from the Yash Raj assembly line, is that there are very few things in cinema that can't be solved by a genuine star performance. Neither Ayushmann Khuranna or Sonam Kapoor gives one here: they're both perfectly pleasant, attractive young people who are cute together and have a functional amount of romantic chemistry, if slightly generic. In fact, in romantic comedy, it's actually a handicap if one or the other of the leads is disproportionately better than the other, since in the end romantic comedies are about couples, not two individuals. No, the star turn, and the only major element in "Bewakoofiyaan" that transcends the by-the-numbers assembly line rom-com, is Rishi Kapoor.

Every inch a star these last forty-plus years, Rishi Kapoor's great gift is his alchemical ability to make the act of collecting a paycheck seem like a magical glimpse into the very heart of creation itself. Even more than usual, his turn in "Bewakoofiyaan" is so large it becomes the sole source of momentum for the movie as a whole. The central couple, as above, is merely functional, as are Habib Faisal's script and Nupur Asthana's direction. Rishi rises above all this, not merely chewing scenery but swallowing large parts of it whole, in the fairly standard role of "disapproving father of the female lead."

"Bewakoofiyaan" does, in one other ultimately secondary way, make an attempt at being something "more" than a romantic comedy, in its use of the global economic recession as a source of dramatic conflict. Khuranna is Mohit, an upwardly mobile marketing executive until his employer decides his post-promotion salary is fiscally not viable and lays him off. Sonam Kapoor is his fiancee Mayera, a successful corporate up-and-comer in her own right. Rishi is her father, V.K., a career bureaucrat who wants to marry her off to a rich guy. V.K. does not like Mohit, although the latter sets about proving himself worthy, even if it involves elaborate subterfuges to make it seem as though he's still employed.

To give credit where due, one of "Bewakoofiyaan"'s assets as a romantic comedy is its self-awareness, expressed through Mohit, about lying being such an omnipresent and unpleasant facet of the genre, circa 2014. He lies as little about his circumstances as he can, choosing instead to deflect inconvenient questions. Still, his excessive, self-destructive pride in his previous status as a hotshot executive counteracts what little sympathy his honesty generates, and even if that weren't an issue, Khurrana gets blown off the screen by Rishi Kapoor. Sonam has little to do except buy shoes, be supportive, and look pretty (the latter most prominently in a gratuitous and kind of silly bikini scene), and thus her thespian abilities are not overtaxed.

It should be noted that nothing about "Bewakoofiyaan" is unpleasant. Even the slightly overlong obligatory "serious" part is over soon enough, and we're back to Rishi Kapoor walking around saying funny things and mugging. The movie is perfectly acceptable middle-of-the-road romantic comedy material, and for fans of such things it should certainly hit the spot. Still, "Bewakoofiyaan" is decidedly more a product than it is a film, per se. Considering that it has little pretense at being anything else, that's an eminently acceptable state of affairs. 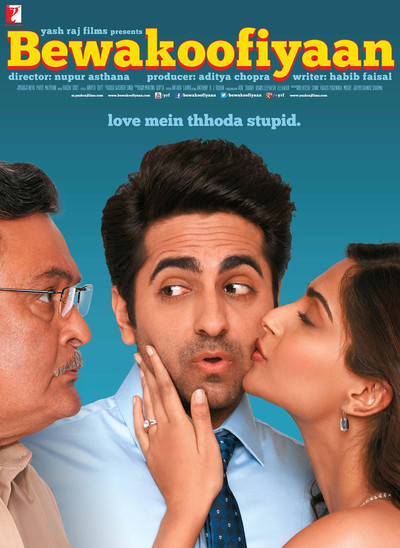