Better Nate than Ever

Thank goodness for theater kids. If not for the mysterious but unquenchable spark in the kids born loving plays and musicals, who would tell our stories? These are the children and teenagers who grow up to create “My Fair Lady,” “Hamilton,” “Mamma Mia,” “Les Miserables,” and “The Sound of Music.” They are the people who make us laugh, cry, stand up and cheer, and dance in the aisles.

Unfortunately, theater kids often have a really tough time in middle school. Also unfortunately, those middle schools are often a far distance from Broadway. That is the case with the title character of “Better Nate Than Ever,” a Pittsburgh seventh grader who knows all the lyrics to “Corner of the Sky” from the 1970s musical Pippin. He also knows that Wicked should have beat Avenue Q for the 2004 Tony award and that somehow, some day, he is destined to perform. Writer/director Tom Federle is a former Broadway dancer who wrote the book this movie is based on and is the showrunner for “High School Musical: The Musical.” Every moment in "Better Nate Than Ever" reflects his own deep love for musicals and for the people who create them.

Nate (newcomer Rueby Wood) wakes up to George Benson’s “On Broadway,” and dances in his bunny slippers, excited and anxious to find out if he has been cast as the lead in the middle school musical about Abraham Lincoln. That does not happen, but an even bigger dream appears, leading to an adventure that is exciting, musical, and heartwarming.

Nate’s best and apparently only friend is Libby (Aria Brooks, who has perfected the snap of the Eve Arden-style best-friend delivery). She comforts him when he loses out on the school play with the news that there are open auditions in New York for a new musical based on “Lilo and Stitch,” the animated Disney film about a Hawaiian girl who befriends a space creature. Conveniently, Nate’s parents and brother will be away for the weekend, so he and Libby sneak off to Manhattan on an overnight bus. When they discover they cannot audition without a parent or guardian, they conveniently run into Nate’s Aunt Heidi (the ever-delightful Lisa Kudrow), an actress supporting herself as a caterer. She gives Nate some good auditioning advice and lets him stay with her when he gets a callback.

Nate’s parents are played by real-life Broadway stars (and real-life couple) Michelle Federer and Norbert Leo Butz. Wood adds to the Broadway luster because he played the title role in the musical “Charlie and the Chocolate Factory.” One of the film’s highlights is when he needs some money to buy a phone charger and ends up singing with some buskers in Times Square. His song of choice, of course, is “On Broadway,” and Wood performs it with such joyful confidence that he gets a fist bump from George Benson himself.

At a time when school boards, legislators, and even Disney itself find themselves in the middle of conflicts over the best way to educate children about gender and sexual orientation, it's especially welcome to see the issues presented with clarity and grace here. Nate gently tells Libby that they will always love each other, but a romantic connection will not happen. She understands. That's it.

Like any classic movie musical, there are some elaborate dream-like numbers as well as the diegetic songs in the auditions, all expertly staged. Teen favorite Joshua Bassett adds warmth to an impatient older brother who needs some time to appreciate Nate. Federle knows the backstage experience and there are some telling moments with the other theater kids hoping to get cast. But a detour to the Natural History Museum does not work as well and the estrangement between Nate’s mother and her sister Heidi is not as skillfully handled.

There are two good reasons to watch “Better Nate Than Ever.” First, it is smart, fun, and funny, a great movie to share with the family. Second, becoming a Rueby Wood fan right now will make sure you will not miss a moment from a performer who is already a master of comedy, drama, singing, and dancing. Someday, when he wins a Tony, you will want to be able to say, “I saw him in his first movie.” 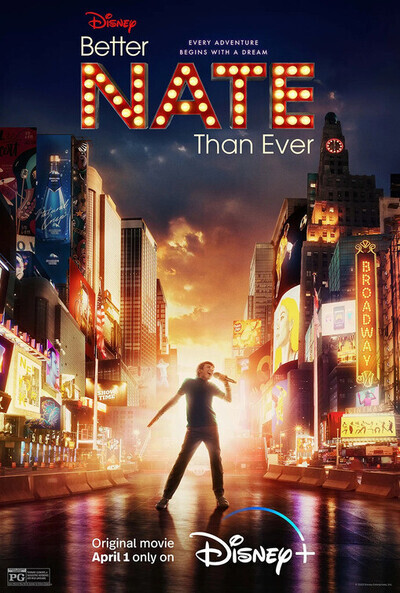