Berlin, I Love You

“Berlin, I Love You” is the latest edition in the “Cities of Love” franchise, a series of films created by producer Emmanuel Benbihy that consist of a series of short films, oftentimes featuring top names on both sides of the camera, that all take place in one specific city—previous installments have been centered around Paris, New York, and Rio—and which all focus on the various possibilities of love that can be found there in a sort of intercontinental riff on “Love American Style.” For some viewers, this particular edition might seem like a bit of a hard sell because when one tries to imagine a city known for its overwhelmingly romantic properties, Berlin does not exactly leap to the mind in the way that Paris obviously does. To be honest, the film does not exactly make a convincing case for the idea of Berlin as a hub of passion, or really for its existence as a movie.

This time around, there are ten stories, one of which, Josef Rusnak’s “Transitions,” serves as a wraparound that eventually and tenuously connects the other segments. In that one, two street performers—an Israeli singer (Rafaelle Cohen) and a German (Robert Stradlober), who stands around dressed like one of the hovering angels from “Wings of Desire”—meet cute and find themselves gradually drawn to each other. Peter Chelsom’s “Berlin Ride” stars Jim Sturgess as a man who has come to Berlin to drink himself to death following a bad romance and who learns to live and love again. Massy Tadjedin’s “Under Your Feet” is about a refugee worker (Keira Knightley) who finds herself taking a young Arab child home with her while his mother is away, much to the consternation of her own mother (Helen Mirren), who wishes that she wouldn’t try to take on all the problems of the world herself. Til Schweiger’s “Love is in the Air” finds an aging American (Mickey Rourke) trying to pick up a much younger fellow American (Toni Garrn) in a bar and while I won’t reveal what happens from that point, the fact that the screenplay for this segment was penned by none other than Neil LaBute should alert you that happiness and good cheer are probably not just around the corner. On a much lighter note, “Berlin Dance” finds lost tourist Jenna Dewan stumbling into an elaborate ballroom dancing fantasia complete with an appearance by the famed Palast Orchester.

As can probably be determined by its title, Stephanie Martin and Claus Clausen’s “Me Three” tackles sexual harassment as a group of women (Emily Beecham, Veronica Ferres, Lili Gattyan and Phoebe Nichols) come together in a laundromat to discuss the various forms of abuse they have recently suffered at the hands of men and are then visited by the perfect embodiment of their rage, Dani Levi’s “Hidden” follows a refugee (Alexander Black) who is on the run from the police after being attacked by a group of punks and who takes refuge with a friendly prostitute (Carol Schuler). Diego Luna plays the title role in “Drag Queen,” in which his character has a riverside meeting of the minds with a teenaged boy (Michelangelo Fortuzzi) who is questioning his own sexuality. “Lucinda in Berlin” finds Dianna Agron pulling double duty as both the director and co-star, playing a winsome puppeteer who helps to rejuvenate a burned-out Hollywood producer (Luke Wilson). In the concluding tale, Justin Franklin’s “Embassy,” Sibel Kekilli plays a would-be journalist who is reduced to driving a cab to make a living when a potentially big story literally lands in the back seat of her car.

The trouble with movies of this sort is that even when the stories are good on an individual level, the need to shift from one narrative to the next every 10-15 minutes can lead to a certain amount of frustration after a while. With “Berlin, I Love You,” the problem is compounded by the fact that most of the stories are not particularly interesting, either on their own or as part of a whole, and don’t really make much of an argument for the romantic aspects of Berlin. In fact, while most of the stories in the Paris and New York iterations were undeniably connected to their settings, the connection here is far more abstract—a number of the stories here could be taken out and reset in practically any other city in the world with only minimal changes to the material. The tone is also all over the place, as whimsical stories like “Berlin Ride” and “Berlin Dance” rest uneasily amidst the ones involving the plights of refugees and the Times Up movement. The latter is especially awkward as it lurches between honest truth-telling in its early moments to something broader and sillier that concludes, I kid you not, with a wacky dance party.

Of the stories, my favorite is probably “Berlin Dance,” which may be the slightest of the bunch but which is undeniably charming nevertheless. I also liked “Embassy,” which may not be especially romantic in nature but which does a good job of packing an action-packed espionage saga into only a few minutes. “Love is in the Air” is not especially good—the twist can be seen a million miles away—but Rourke’s performance is strong and sure. “Hidden” has an intriguing premise but is over too quickly to make much of it, a problem which also befalls “Drag Queen” (the latter also dogged by the perhaps dubious casting of Diego Luna in the title role). “Berlin Ride” is just kind of silly. “Under Your Feet” is well-meaning but oddly shifts its focus from the refugee problem to the comparatively uninteresting mother-daughter dynamic. “Transitions” is cute and that is about it. “Me Three” starts well but ends badly. The biggest flop, however, is “Lucinda in Berlin,” which is such a wan little embarrassment that its presence can only be explained by the fact that the presence of Wilson and Agron might attract a few more viewers.

Of course, making a multi-story film of this type in which all the tales are bonafide hits is practically impossible. In the case of “Berlin, I Love You,” only a couple of them really work and even those are not quite good enough to encourage viewers to slog through the rest in order to see them. At first glance, this may look like a moviegoing feast, but those who do make it through will find themselves feeling overstuffed and yet still somehow unsatisfied and hungering for a real movie. For those, may I recommend “Wings of Desire,” a film which is both a vastly superior work and which offers a more satisfying look at the idea of love in Berlin than this one can even begin to muster. 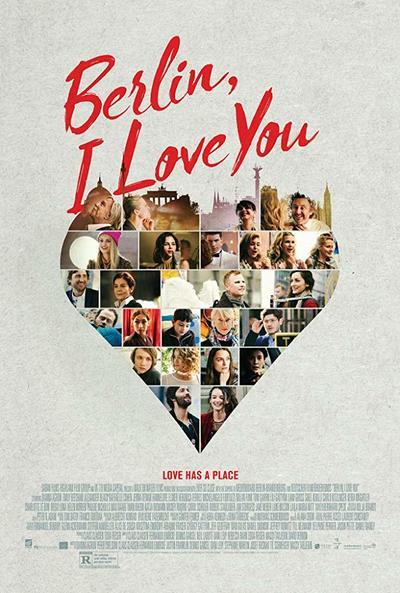