Before You Know It

“Before You Know It” shifts seamlessly from quirky to sad to mysterious to wacky to surreal within just the space of a few days, so much so that you’d never know it’s director Hannah Pearl Utt’s feature filmmaking debut.

Co-writing the screenplay and co-starring alongside her longtime creative partner, Jen Tullock, Utt brings us into a grounded and specific vision of New York City, then has a blast blowing it all up with knowingly explosive melodrama. Her film is at once twee and truthful, a tough balance to strike. The appealing messiness of the beginning gives way to a resolution that feels a bit too tidy by the end. But the strong performances from a cast composed of both veterans and lesser-known actors always give the film an honest, accessible underpinning.

Utt and Tullock have a terrific, natural chemistry as sisters Rachel and Jackie Gurner, women in their 30s who still live in their childhood home: a brownstone over the small, Greenwich Village theater where they also work. Rachel is the stage manager and low-key voice of reason; Jackie is a brash and buoyant actress and the mother of a quietly angsty 12-year-old girl named Dodge (Oona Yaffe). But they all live in the shadow of patriarch Mel Gurner (the always great Mandy Patinkin), a roaring, larger-than-life playwright whose work -- and whose entire personality, really -- has long set the tone and direction of their existence.

Rachel and Jackie are a study in extremes, their relationship marked by a lifetime of tension and resentment but also clear affection. The former is modest and measured; in one of the film’s funniest lines, Jackie derides her sister for dressing “like a Mennonite caterer.” The brash Jackie, meanwhile, is all cleavage and inappropriately short denim mini-skirts. Both women are obviously in need of love and approval, which their co-dependent relationship with their towering force of a father doesn’t adequately provide.

But they all get ripped from their collective dysfunction when Mel dies (it happens early in the film, folks) and the sisters learn that the mother they’ve long thought was dead is actually alive. She also happens to be a legendary soap opera star who works only about 40 blocks uptown on the Upper West Side. In a sly bit of casting given that her work on “One Life to Live” helped put her on the map decades ago, Judith Light gives a delightfully showy performance as Sherrell, a fading diva struggling to stay relevant. She’s a raging narcissist who veers between tantrums and trembling frailty, and while Light intentionally goes over the top, she also finds places to explore her character’s vulnerability.

Watching all three of these women dance around each other and awkwardly feel out this newfound relationship offers both humor and a steadily simmer tension. Rachel and Jackie initially find hope in this maternal connection but there’s no escaping their past, resulting in a powerful scene in the ladies room at a splashy soap opera party where they finally allow years of anger to bubble to the surface.

Long before then, though, we had a keen sense of who these people are by witnessing how they live. The family’s colorful and crammed brownstone, the vivid work of production designer Katie Hickman, radiates a believably lived-in feel. Ornate and richly hued, it’s the outward representation of the family’s creative, bohemian vibe. It also provides a palpable sense of claustrophobia -- of the notion that these characters are stuck in every way -- which Utt explores by following them in and out of bedrooms, bathrooms and hallways through long, fluid tracking shots as they walk and talk.

Away from home, Yaffe’s Dodge strikes up a compelling new relationship of her own: with the teenage daughter (Arica Himmel) of the family’s accountant (charismatic “Luke Cage” star Mike Colter), whom she gets stuck with while her mom and aunt are busy being star struck. Yaffe and Himmel both display a great naturalism in their on-screen debuts, and their characters’ connection offers a glimmer of hope as to what can happen when you dare to break old habits and burst out of your insular bubble. “Before You Know It” has a lot more to say than its bland title would suggest. 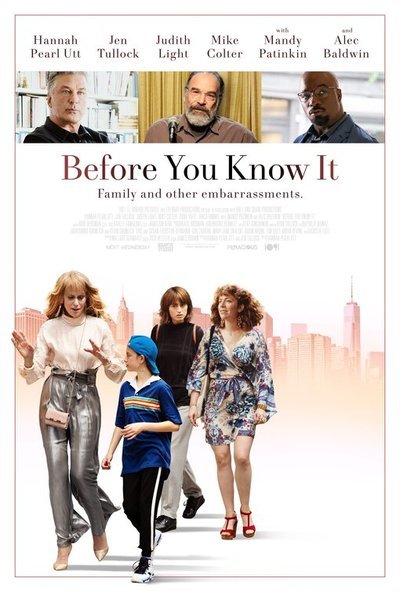