The character Pippi Longstocking, beloved misbehaver of children’s literature since 1945, doesn’t appear in this movie and is barely even mentioned. In her native Sweden, the name Astrid Lindgren is all but synonymous with Pippi, so the fictional girl doesn’t really even need to be mentioned in a biopic of its author.

As it happens, the story told in “Becoming Astrid,” directed by Pernille Fischer Christensen from a script she cowrote with Kim Fupz Aakeson, is strong enough that it resonates even if you’re not a Longstocking partisan. The movie begins with a shadowy Lindgren, in old age, in her apartment opening fan mail from children. The writer, born in 1907, died in 2002, and the production design here strongly implies this episode is near the end of her life. From one of the letters, we hear a child’s voice asking, “How can you write so well about being a child when you haven’t been one in so long?”

That sounds like a cue, and it is: the film flashes back to Astrid’s early teens, where she’s seen as a lively, irreverent girl with an ear for wordplay that grates on her stern, religious parents. Inspired by a church sermon on Sodom and Gomorrah, she makes a boisterous verbal hash of those place names, reconfiguring them as “Good morning” and “soda pop!”

Her cheerful lack of regard for authority and proto-feminist views are demonstrated as informing her future work, but only indirectly; as the movie goes on, more questions and observations from her fan mail are heard on the soundtrack. “So many people die in your books, but when I read them I just want to live” another correspondent notes. Astrid’s own rage to live is not easily met by the life choices offered in rural Southern Sweden. Which partially explains why, when she gets a job at a local newspaper run by an older, married man, Reinhold (Henrik Rafaelsen) she finds an immediate affinity there. Not just because he’s clever and witty enough to captivate her with word-association games shortly after they’ve met.

Reinhold is married but separated, with something like a dozen children (okay not that many), so it’s a bit of a shock to see Astrid, played by Alba August at this stage in her life as possessing as much fierce intelligence as she does coltishness, initiating a romantic relationship with the man. When that relationship yields a pregnancy, Astrid is determined to handle it her own way, despite the initial cowardice of her partner and the moral disapproval of her nevertheless loving parents.

Traveling back and forth from Stockholm to Denmark—the latter place being one where she can bear the child in relative anonymity, and leave him in reliable foster care—Astrid suffers both physical privation (discussing with one friend whether to go to another’s house for a party, one in-favor argument is “she has firewood and a gramophone”—boy, the swinging 1920s!) and emotional frustration, as both the father of her child and her parents disappoint her on many points. In Stockholm she finds a less-than-rewarding secretarial job, for which she is direly overqualified. But she finds something else, too: a compassionate boss who’s a man of his word to her.

“The children in your books can overcome almost anything,” one of Astrid’s fans says. “Becoming Astrid,” directed by Christensen in a handsome style that could be said to fall between the stools of Jan Troell and Lasse Hallstrom (early Lasse Hallstrom, I might add, raising an eyebrow at the credits for the recent “The Nutcracker and the Four Realms”), is a story that shows how overcoming turns to becoming if, among other things, you’re able to stick to your principles. This film about an exemplary woman, made by women, is as much a pleasure as it is a lesson. 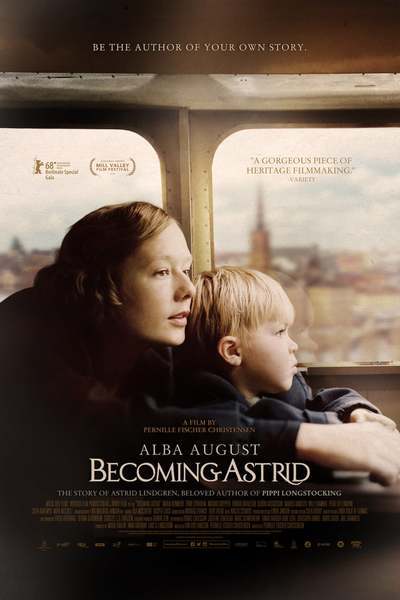