“Beautiful Thing” tells the story of two teenage boys, neighbors in a London high-rise housing project, who gradually become aware that they are homosexual. But a funny thing happens: the most interesting scenes involve the characters around them, who all but steal the movie. The boys' lives contain few surprises (it is clear from the start what the one big surprise is going to be), but from the other characters there is one astonishment after another.

The boys are Jamie (Glenn Berry), an introverted, quiet type, and Ste (Scott Neal), an athlete. Jamie becomes aware that he's drawn to Ste, but does nothing about it until one night when Ste is beaten (as usual) by his alcoholic father, and Jamie's mother takes pity and allows Ste to sleep at their house. Ste and Jamie fairly quickly discover how they feel about each other, and there is a touching scene where they study a copy of Gay Times magazine, trying to figure out what they're supposed to know about homosexuality. (They guess that the word “frottage” means a kind of yogurt.) Their relationship is shown in a fairly simple, sweet way, and we realize that, straight or gay, all teenage first romances have a lot in common, including great wonder inspired by raging hormones and idealisms. What is much more interesting is the world they inhabit. The housing project consists of long rows of flats opening onto balconies, and along the balconies the neighbors have established an easygoing, friendly community.

We meet Jamie's mother Sandra (Linda Henry), a barmaid with a big personality. She's loud, jolly, self-confident, good company. Her relationship with her son seems basically a healthy one, although some might question her hours, and her choice in boyfriends. Her current squeeze is Tony (Ben Daniels), a leftover hippie younger than her, who is a good sort, although pot has made him vague. (Meditating on Jamie's situation, he comes up with profundities such as, “I think he should just like . . . move towards getting away from all that”).

The dynamo of the balcony is a young black woman named Leah (Tameka Empson), who lives next door and obsesses about the Mamas and the Papas. She wants, indeed, to be the next Mama Cass, and plays her records at top volume at unexpected hours. “It's not natural,” Sandra says. “A girl her age, into Mama Cass.” On the other side lives Ste's dysfunctional family, which also includes a violent older brother.

These peripheral characters are the real life of the film. They're quirky, funny, and unpredictable. There is nothing really remarkable about Jamie and Ste; the director, Hettie Macdonald, exhausts what she has to say about them by making them gay and having them understand and accept that. But Sandra, Leah and Tony are colorful adults who are verbal (if not articulate) about their beliefs and desires, and we brighten up every time we see them on the screen.

Although I have never been a gay London teenager, I had the feeling that Jamie and Ste were not understood very deeply by the film, and their behavior wasn't convincing. After they tentatively accept that they are gay, for example, they go to a pub advertised in Gay Times and find drag queens putting on a floor show. (One of the songs is “Hava Nagillah”). Here they realize they are not alone in the universe, and even eventually invite Sandra and Tony to go there with them.

Oh, yeah? To begin with, no London teenager is going to be completely in the dark about homosexuality. Not in these times. Nor are most 16-year-olds going to find much amusing in a pub full of older men, many of them in drag, a lot of them drunk. Teenagers of any sexuality seek others their age, think 30-year-olds are “old,” and might be a little slow to dig middle-aged men doing Barbra Streisand imitations.

This pub is not going to be the answer to Jamie and Ste's search, and yet there are times, I swear, when the movie actually seems to think that once you come out of the closet, you head straight for the pub and live there happily for the rest of your life. It also contrives a happy ending where Jamie and Ste embrace each other in public in a commons area at the project, while Mama Cass's voice bounces encouragingly off the walls, and neighbors and strangers beam their approval. Also not a likely scenario. The scene where Sandra confronts the truth about Jamie, on the other hand, is well-written and acted; the movie understands her better than her son.

“Beautiful Thing” is essentially a fantasy, a coming-out fable with about the same depth and insight as a romance novel for teenagers. What makes the movie special and worth recommending are those other characters. I'd like to see a whole movie about Leah. I was pleased that Sandra finally got her own pub, and I'd like to see a movie about her managing it. As for Jamie and Ste, they will grow up and become more complicated, better-informed and less one-dimensional, and the day will come when they will look at a movie like this, smile, and shake their heads in amusement and disbelief. 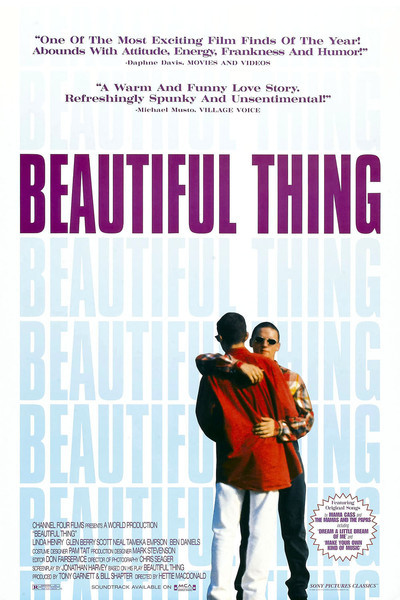 Rated R For Sexual Situations and Some Strong Language