As multi-layered as the massively influential group it chronicles, Spike Jonze’s “Beastie Boys Story” is many things at the same time. It is a document of an event in New York City, produced and directed by Jonze himself, at which Adam Horovitz (Ad-Rock) and Mike Diamond (Mike D) alternated telling the story of their lives in front of clips and pictures from the incredible trajectory of The Beastie Boys. But this is more than mere fan service slide show. It is a joyous, infectious story of the human capacity to change, and the importance of creative freedom to guide that change. Of course, it becomes something of a eulogy to Adam Yauch (MCA), who passed in 2012, but it’s telling that you feel his presence here more than his absence. He influenced everyone in that room, from his lifelong best friends on the stage to the fans in the audience to the director behind the camera. And so “Beastie Boys Story” becomes an ode to how creative passion and expression lives beyond its inception to impact people around the world and for generations to come.

I can’t divorce my own love for The Beastie Boys from how I feel about Jonze’s film, so take that into account if you must. However, I do think there’s something to appreciate here even for people who gave up on the boys after Licensed to Ill or never heard them in the first place (although it must be nice under that rock if you’re in the latter category). Joking and laughing their way through their life stories, Horovitz and Mike D hit all of the major beats that you’d expect but they do so with a joy that’s always been reflected in their best work. They tell most of their stories with a smile, recounting the early days when they really just rode a rollercoaster that was being designed by Rick Rubin and Russell Simmons, and became household names in the process. The anecdotes in the first half of “Beastie Boys Story” are fantastic. I could have listened to Ad-Rock talk about touring with Run DMC for hours.

But the history of The Beastie Boys isn’t without its valleys. The film about them gains depth when its hosts address how their flaws influenced the way they behaved in the future. Ad-Rock dejectedly reads the lyrics to “Girls,” which he wasn’t even exactly proud of then, and the guys discuss how the frat-bro image they were mocking in songs like “Fight for Your Right” kind of became who they were and, worse, how their friends saw them. They were kids when they became household names, and while their descent into the darker side of fame isn’t the focus of “Beastie Boys Story,” it’s not ignored either.

What’s remarkable about the storytelling here is how Jonze, Horovitz, and Diamond capture the concept of evolution. The boys learned lessons from the corporate manipulation of Licensed to Ill that influences the now-beloved Paul’s Boutique, and the failure of that album fed the creative expression of Check Your Head. One piece of art leads to another. They don’t exist in the same way without the variables of the one that came before.

And this holds true for the way these guys saw the world. Those lyrics to “Girls” have a counterpart in “Sure Shot” just eight years later. In one of the film’s most powerful moments, Ad-Rock and Mike D discuss how they have been confronted by the sexist aspects of their rise to fame leading to accusations of hypocrisy later in life and Diamond quotes his BFF: “I’d rather be a hypocrite than the same person forever.” Amen. The Beastie Boys grew musically, creatively, and personally, and the reason “Beastie Boys Story” is so powerful is because it doesn’t just put pieces on a line of history chronologically but it charts actual growth in every way, much of it inspired by the amazing Yauch, who contained so much creative expression that he constantly had to find new ways to get it out. He was always looking for new avenues to explore creatively and politically, often combining the two in events like his Free Tibet concert.

“Beastie Boys Story” will connect with fans of the band in much the way ESPN’s “The Last Dance” is tailormade for those who had Michael Jordan posters in their dorm rooms two decades ago. And yet I’d encourage everyone to watch it. If you think you know this story because you saw some quirky videos or heard some memorable hooks, you don’t know everything. And it’s so well-written from front to back that anyone who appreciates a good story should take the time to listen to this one. Hearing how these goofy, crazy boys went from bouncing ideas off each other as they walked down the street to redefining their form over the next quarter-century is almost empowering. It’s a reminder to all of us to just keep expressing, keep changing, keep moving, keep rhyming, and keep fighting for your right to party.

(Note: Don’t move after the credits. Some amazing archival footage appears after the “Intergalactic” video.) 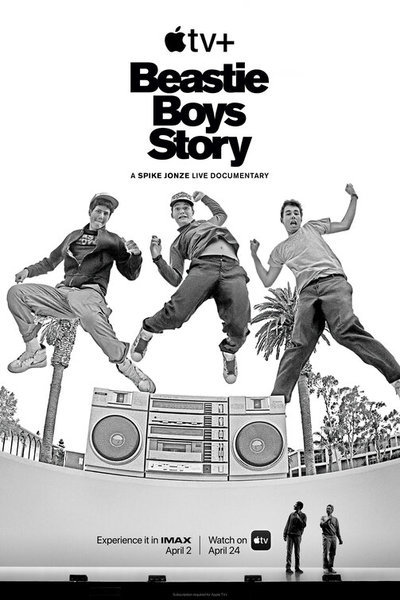 Adam Horovitz as Himself

Michael Diamond as Himself

Adam Yauch as Himself (archive footage)