Directed by Tracey Deer, "Beans" is a coming-of-age story that attempts a balancing act of finite life wisdom and the highlighting of important Mohawk history, all of it told with sincerity. But that very sincerity only gets it so far when the storytelling makes nearly everything feel like a device, in order to make the audience feel a certain way.

“Beans” is only the nickname for the character at the focus of this film; her real name is Tekehentahkwa, and she is enlivened by a striking performance from rising star Kiawentiio. Beans helps set the tone for the movie as well—she’s idealistic and easy to follow along with. “Beans” has wisdom to impart, and the film is more or less about watching her learn.

Co-written by director Deer and Meredith Vuchnich, the life of Beans is shown at a pivotal, tense time in Canadian history, of a 1990 clash between the Mohawk people and the town of Oka, in Quebec, Canada; protests were enflamed by plans to put a golf course and townhouses on Mohawk property, including of a burial ground. A peaceful protest lead to barricades being constructed by members of the Mohawk tribe and the Canadian army, with everyone pointing rifles at each other. Racist Canadians showed their outrage by yelling, throwing rocks, and spitting on Mohawk people. The standoff lasted 78 days.

This context is painted in "Beans" with news footage inserts, and with brief moments that depict Beans and her family witnessing the scary tension firsthand. In one earlier scene, Bean goes to the barricades with her sister and mother to offer support, to be present, only for a type of potentially deadly barking contest to begin between armed men on both sides. A group of women (including Beans' pregnant mother, Lily [Rainbow Dickerson]) help defuse the situation by standing with linked arms in between the barricades. It’s a noble, sincere, cheesy moment. But like numerous beats in the film, it also sells the possible full impact short by being so emotionally didactic.

“Beans” is also sincere about its many other screenwriting pieces, even if they struggle to let the film have enough room for bits that don't seem like elements of a familiar formula. The coming-of-age narrative angle especially brings this to light, like how Beans goes through certain initiations. She plays with different hairstyles; she discovers the power of the word “f**k” while staring at herself in the mirror, trying to freak herself out; she wears clothes that get her in trouble with her parents, but make her more attractive to boys; she later learns how terrible said boys are, especially when they get her alone.

Most interesting, Beans learns to be not nice. She learns to not take it on the chin, she learns to fight back. She begins this emotional journey when she starts to hang out with more rebellious Mohawk kids, who already carry certain merit badges of rebellious adolescence. Beans then makes friends with an older, more intimidating girl named April (Paulina Alexis) who teaches her to take a hit, a means of survival. “If you can't feel pain, then nobody can hurt you,” she says. That’s a dagger of wisdom from a teenager, which shines in a script that's prone to scenes based on a binary of when things clearly either feel good or feel bad.

With its coming-of-age and its historical context, “Beans” concerns ideas of pain and conflict, but it’s too timid to really engage those ideas, to honor their discomfort aside from how horrific discrimination is (a few scenes of the family being ambushed by racist Canadian citizens are upsetting, but played too directly for tears). There is pain on display in this movie—perhaps best displayed by how Dickerson’s compelling performance internalizes it while carrying so much on her shoulders—but it is nearly simplified as one of many passages that become numbing with an overzealous music cue. Even Beans’ fiery, internal arc feels minimized by storytelling that would rather be tidy than slightly abrasive.

Some coming-of-age stories are like mirrors, constructed by a storyteller for an audience of various ages to look at how they came to be who they currently are. Others are more like maps, to make viewers aware of what comes ahead on a road previously traveled. “Beans” readily fits into the latter category, unfolding like it was made first and foremost to prepare viewers just like its main character. There’s absolute value in this kind of approach. But it's not hard not to feel that an even more resonant film would go deeper into what’s underneath these various landmarks of maturity and identity, instead of predominantly just pointing them out. 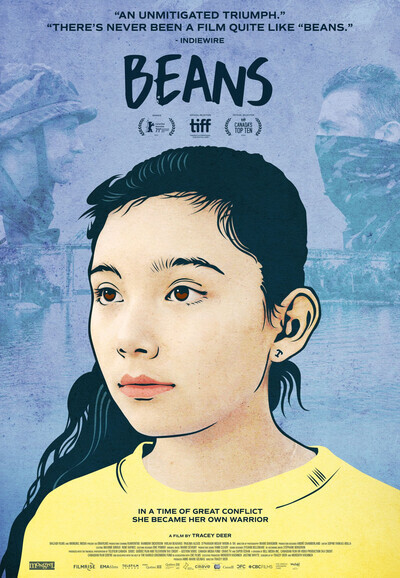