“Be Water” is the latest in the acclaimed ESPN “30 for 30” series. Its inclusion is intriguing because I never really considered its subject, Bruce Lee, to be a sports figure, though the film cleverly juxtaposes footage of him with footage of Muhammad Ali. To me, he was always a spectacular action movie star whose few films and untimely death both contributed to his legendary status. To die young, at the height of one’s sport or entertainment greatness, always adds layers of reverence and myth to one’s achievements. This often leads to “print the legend”-style explorations of the subject at best, unbearable hagiography at worst. Couple that with the sports doc genre’s propensity to pitch itself straight down the middle for maximum effect and minimal offense, and the scales tend to weigh even more toward a blatant, toothless love letter.

Bao Nguyen’s documentary doesn’t lack bite—there are moments when the talking heads (none of whom are seen until the end credits) speak of the “preferred minority” racism Lee faced while forging a career in Hollywood and a life in America. But far too often “Be Water” remains  strictly in fan-pleasing territory. I have been a huge fan of Bruce Lee since I first saw “Enter the Dragon” on a double feature with Jim Kelly’s “Hot Potato” back in 1976. So, I was completely susceptible to every moment of fan service presented here, and was interested in every word Lee had to say about his own life and his philosophy. He is why I went into martial arts as a young man, and as such I have much affection for him. Viewed solely through that lens, this is a successful documentary, an introduction to Lee that cherishes him and provides enough clips to satiate those who love his films.

But, as Nguyen navigates through Lee’s life, sometimes aided by his daughter’s reading of his letters, we sense how much richer the arc of this man’s life was, and we want to know the details more intimately. Here was a man who was born into American citizenship in San Francisco, whisked back to Hong Kong where he became a child acting star and a self-proclaimed hoodlum, then sent back to San Francisco where he started schools of martial arts while trying to break into movies in Hollywood. He then returned to Hong Kong where a legend was born with several films, including one he directed, “The Way of the Dragon,” where he fought a young Chuck Norris. If that weren’t enough, he returned to a Hollywood that rejected him to star in his last film, the success of which he never got to see due to his untimely death in 1973.

This is a life that doesn’t need embellishment nor extra drama. It’s also imperfect, as all lives are, filled with trials and tribulations. “Be Water” never fully interrogates these lest the viewer see the full human underneath or is forced to deal with the more unsavory elements of being Asian and in Hollywood. These ideas are touched upon, to be sure, but it always feels like the film pulls away just when things are about to get complicated. For example, the then-head of Warner Bros. discusses why “Kung Fu,” the series Lee created that would eventually star David Carradine, didn’t star Lee. We’re told that America “wasn’t ready” for a Asian lead, even after Lee achieved some fame as sidekick Kato on the television show, “The Green Hornet.” The WB exec is allowed to just kind of let this travesty go unchecked without further inspection, as if he were saying “Que sera sera” about casting a White actor in the lead.

There are other moments like this where you long for an extra moment with a subject or individual. Stories of how Lee and his multi-racial friends and students would casually swap dates as dance partners just to get a rise out of racists are recalled, as are brief glimpses into his adventures in the Bay Area’s counterculture. These insights are just as important as those that show how Lee brought the sport of martial arts into the American culture. And lest we forget, the most rooted in reality detail of Lee’s legend is him setting the stage for more Asian action heroes. Someone notes how powerful he felt upon seeing Lee kicking ass on the screen, shattering the stereotype of the docile male servant that Hollywood always favored (and was usually played by a White actor). This is a moment I wanted to spend time with, to savor as much as I did the footage from the films I practically know by heart. Instead, it’s almost a side note.

Every voice we hear on the soundtrack is of someone who knew or worked with Lee, from Raymond Chow, who produced the films that made Lee a Hong Kong superstar to Lee’s wife, Linda and daughter Shannon, to actress Nancy Kwan. We also hear from some of Lee’s earliest American friends, his gong fu students and of course, basketball legend Kareem Abdul-Jabbar, who famously fought Lee in the then-unfinished “Game of Death.” These people have much love and affection for Bruce Lee, and that comes through loudly and in touching ways that are very effective.

“Be Water” really just wants to be a stroll through a man’s professional life buoyed by his own words and the words of those who knew him best and loved him most. If you are looking for something entertaining or simply the opportunity to bask in the glory of the man once known as Lee Jun Fan, this will certainly fit the bill. I know you folks hate when I do star rating arithmetic in my reviews, but anyone who knows a programmer’s mind will understand that sometimes I just can’t help myself. Add a half-star to my two-and-a-half star grade if you are someone who doesn’t mind the occasional tip into Liberty Valance territory. It’s a pretty close call for me, but I can’t quite push myself over 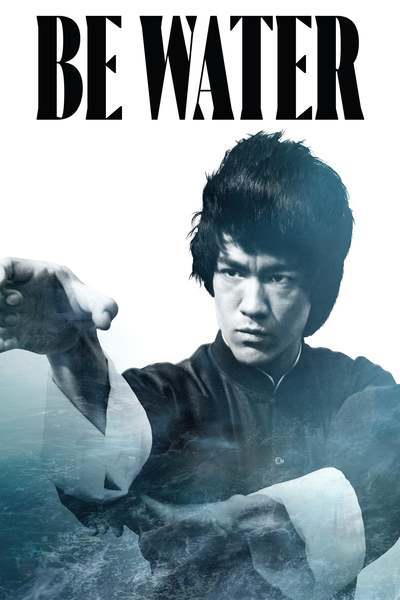