“Bardo” refers to the Buddhist concept of in-between, an intermediate, transitional, or liminal state between death and rebirth. Alejandro González Iñárritu’s film title points to a specific in-between that is of understandable interest to those whose job is telling stories: the place between fiction and reality. Fiction is always about some kind of truth, designed to illuminate the human condition, even at its most fantastically imaginative. Reality is much too big, complex, and uncontainable to contain completely, even in the most meticulous fly-on-the-wall documentary. “Bardo’s” subtitle is: “False Chronicle of a Handful of Truths.” Can it be said that a handful of truths are true? Don’t we speak of “the whole truth”? Isn’t the idea of fiction that it can provide a true perspective we miss in the midst of all of the “facts” around us? This is the preoccupation of Iñárritu and of his film’s main character.

Form aligns with content in “Bardo,” which is about more than one space in between. First, at the heart of the film is the essential homelessness and perpetual longing of an immigrant. Iñárritu is a Mexican who has chosen to live and work in the United States. Significantly, this is Iñárritu’s first Spanish-language film in years, with mostly Mexican actors, presented with Latin America-style magical realism. Next, there is the in-between that separates the film’s lead character Silverio (Daniel Giménez Cacho, in a performance of great feeling and humanity), who makes documentaries, from the real-life writer/director of fictional feature films who is his counterpart.

The movie begins with the birth of a baby, who seconds later whispers something to the doctor. He says he does not want to be born because the world is a mess. So, the doctor and nurses put him back inside his mother. Even a baby just a few seconds old is in the middle between being born and not being born. Continuing the theme of truth and fiction, the baby in the film represents a real-life child who lived just 30 hours, and whose memory still haunts his parents, who cannot let go of the tiny handful of ashes he left behind.

As in “Birdman or (The Unexpected Virtue of Ignorance)” this story is told in a subjective, sometimes fanciful fashion. At a party in Mexico celebrating an award being given to Silverio in the US, there is a marvelous dance number to a Bowie song apparently heard by the audience and just one dancer. Then Silverio goes to the men’s room, where he sees his dead father and has a very reassuring conversation, with Silverio shrunk down to child-size. Earlier, we see the shadow of a man walking in the desert. He can almost fly. For brief moments he soars, but his feet keep returning to the sand.

What interactions are “real” and what is imagined or symbolic is left to us to sort through, or just to decide it does not matter. Each moment is presented to us with vibrance and wit. Silverio once had a partner in filmmaking named Carlos (Hugo Albores) who has stayed in Mexico and hosts a talk show that is broadcast live. Did Silverio appear on the show but refuse to answer the frank questions that make him feel guilty for abandoning his home? Or did he refuse to appear, leading to a pointed, increasingly angry confrontation with Carlos at the party?

Silverio’s two surviving children are a sulky teenage boy who prefers to think of himself as American and a daughter who is a recent college graduate. She lives in Massachusetts but wants to return to Mexico. Are they real or just reflections of Silverio’s own ambivalence about his statelessness? Did he really have a confrontation with an American immigration officer about whether a permanent resident who is not an American citizen can refer to the US as “home”? We are too wrapped up in the dazzling images of the television studio and the exquisite performance of Ximena Lamadrid as Silverio’s daughter to spend much time worrying about it.

In one uncomfortable moment, Silverio literally (at least in his fantasy) takes away the character’s power of speech, leaving him mouthing silent criticism. In another, Silverio becomes a part of a scene he is filming, a mountain of dead bodies, portrayed by living actors. This is Iñárritu’s examination of his role as director, of his inability—or unwillingness—to portray the truth, especially when it comes to the pain of the home he had to leave to realize his ambitions as an artist.

Silverio’s son says that his father criticizes each country when he is there but defends them when he is away. Both are in for criticism here. A snooty Mexican resort forbids staff from using the beach. Amazon announces its intentions to buy Mexican land adjoining the US. A cordial US Ambassador to Mexico pushes Silverio to soften his criticism of American policies on immigration. But Silverio (and Iñárritu) are drawn to both. Iñárritu may think of himself as in between, but this film suggests a more accurate word is “both.” 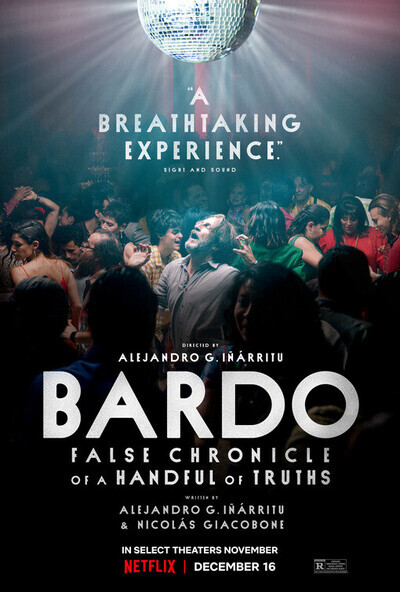 BARDO, False Chronicle of a Handful of Truths (2022)