No such commendation is forthcoming for the makers of "Bad Johnson," as they don’t have a clever bone in their creative bodies. This is an astonishingly bad film whose protagonist’s penis does more than just talk. It falls off and grows its own complete human form. This is a step further than Doris Dorrie’s 1988 film, "Me and Him," where Griffin Dunne’s junk stayed attached and spoke to him in the far less threatening voice of Cousin Larry from TV’s "Perfect Strangers." I wasn’t crazy about that movie’s boring, erudite, philosophical schlong, but at least it didn’t try to throw its owner’s girlfriend off a roof.

"Bad Johnson" is the latest in a series of "comedies" afraid of women, gays and minorities. Each of those groups gets a chance to be humiliated by the filmmakers, with relationship-seeking women bearing the brunt. It follows yet another man-child as he wreaks unfunny havoc by mocking those who do not look or think like him. The ladies find him irresistible, failing to see he’s a real dick who will abuse and mistreat them. Why actresses take roles in dreck like this I’ll never know. The money must be fabulous.

Our hero this time is Richard Johnson (Cam Gigandet), "a charismatic womanizer" according to the summary on IMDB. Predictably, the movie opens with its hero banging the wrong woman. He is then caught by a parade of several other women he’s sleeping with, including an older woman who looks as if she’d rather be in another movie, perhaps listening to Griffin Dunne’s ding-a-ling discuss Aristotle.

Anyway, one of Rich’s angry conquests kicks him in the balls so hard that they lodge in his stomach and stay there. I thought this might be the catalyst for his penis falling off, but even if it were, this film would be too scared to show the offending member. Plus, that would be a clever way to set this story in motion: Angry woman kicks off guy’s wiener, and it turns into some random hipster! Alas, it stays connected for now, and Rich has to wait six weeks before he can resume sexual activity.

"Bad Johnson"’s idea of a Meet-Cute is Rich hooking up with a woman trying to buy a pregnancy test. Rich explains how she can cheat the test, which would be completely useless if it’s positive. The test seeker, Jamie (Jamie Chung), finds all of this charming and begins to date him. Six weeks later, on his way to finally consummate his relationship with Jamie, Rich crashes into a cougar’s BMW. Said cougar exchanges more than her insurance information with Rich.

Now, I don’t give a damn how good that gecko on TV is to your pocketbook. If some guy in a piece of crap car hits your brand-spanking new BMW, you are not going to give him oral pleasure. You’d be sending his nuts back up into his stomach with your Manolo Blahnik. But wait! That would be funny! So it’s not happening in this movie.

Jamie discovers Rich’s infidelity and kicks him out. Taking a page from the equally terrible "The Change-Up," Rich makes a wish he’ll regret the next morning. He wishes for control over the body part he keeps blaming for his philandering. His pillipecker disappears the next morning. Don’t ask me how, but it winds up in an alley across town.

Taking the guise of a naked Nick Thune, the penis calls Rich collect and details his location and lack of clothes. Rich picks him up, then introduces him to his personal trainer buddy, Josh (Kevin Miller). Josh is frowned upon by Rich and the movie because Josh is in a committed relationship. He befriends Rich’s whooziwatzit and discovers he likes him better than Rich. Josh’s relationship with Rich’s penis could have been pumped for commentary about the unspoken homoeroticism in many cinematic bromances, but the movie has less interesting things to do.

Castrated Rich starts a new relationship with Lindsay (Katherine Cunningham), a female client at the gym. As he falls for her, his penis gets weaker. (Whoring good! Relationship bad!!) To combat this, Rich’s one-eyed worm turns criminal. First, he tries to screw Lindsay, then he kidnaps her with murderous intent. When Rich tries to save her, the tables are turned as his pud starts to pound on him. Thune looks as if he can break Gigandet in half, and I wish he had; it would have spared me "Bad Johnson"’s incredibly uninspiring rooftop climax.

I thought I’d get a few cheap thrills out of "Bad Johnson," as I’ve a taste for raunchy comedy. But this movie isn’t even dirty. Randiness is replaced by pathetic attempts at humor involving flamboyantly gay waiters and questionable insults towards Asians. Jeremy Tetreault’s screenplay has the unmitigated gall to justify his white protagonist calling an innocent Japanese restaurant delivery boy "Tokyo Drift" with the old "I had an Asian girlfriend, so I can’t be racist!" standby excuse. Who thought this would go unnoticed? Who thought it would be funny?

The gay waiter is so over-the-top I expected to discover he was a puppet controlled by Wayland Flowers. But he does get a line that sums up how I feel about "Bad Johnson." Looking at Rich, he says "you ain’t even all that!"

"Bad Johnson" suffers from the worst case of creativity shrinkage I’ve ever seen. 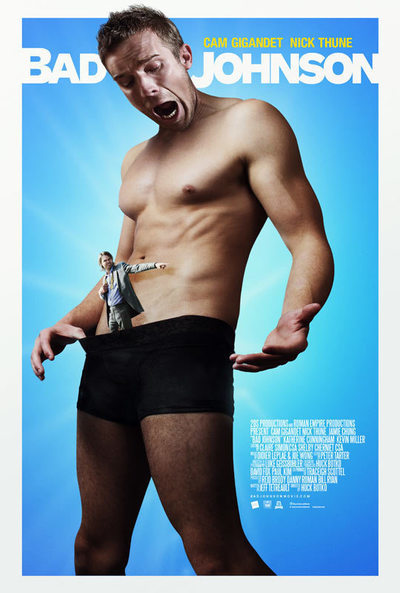