“When I was a kid, this was my favorite place in the whole world.” Under normal life circumstances, this is a harmless enough utterance. In a motion picture in which the place is a national park that the ostensible hero insists he remembers so well that he refuses the offer of a map from a ranger upon arriving, it is a nearly certain indicator of not-to-be-favorited events to come.

And so is the case of “Backcountry,” a very-well executed wilderness thriller written and directed by Adam MacDonald and apparently inspired by a true story that the movie made me very much not want to look up, which I suppose may be taken by some to be a token of its effectiveness. The movie is sufficiently potent in its depiction of the perils of unsupervised camping that I’ve actually seen one reviewer go so far as to air suspicions that the movie has some kind of “let’s just turn all this forest into a parking lot” agenda. I don’t think the movie goes quite that far. Rather, its message, if it can be said to have one, is, “Don’t go camping with an idiot.”

The movie opens with Attractive Young Canadian People Alex (Jeff Roop) and Jenn (Missy Peregrym) bantering as they drive to a wilderness destination. She’s jokingly reading from a “rate your boyfriend” feature in a magazine; he’s asking if “can start a fire without matches” is among the quiz’s criteria. Once parked, Alex commits the first of many mishaps by refusing the map offer. While Alex looks at Jenn as being a bit too buttoned-up (she’s a lawyer and stuff), he is committed to the idea of impressing her with all manner of Canuck Tarzan stuff, which he intends to climax by proposing marriage.

Best-laid plans continue to go awry. Jenn’s not to enthusiastic about skinny dipping in the old swimming hole. A little later, as he’s chopping wood, Alex hears voices; why, it’s Jenn speaking to some buff Irish fellow named Brad (Eric Balfour) who describes himself as a wilderness guide. That we meet this fellow in the middle of his conversation with the female member of the couple is one of director MacDonald’s not-unfamiliar directorial feints. What’s this interloper going to bring to the party? Well, fresh fish, for one thing. Sequences of shots that indirectly juxtapose Alex and Jenn’s shiny newly-purchased camping equipment with the messy business of fish-gutting convey a sense of disorder that can’t be tamed. Later, sitting by the fire, Alex stammers when the stately, studly Brad asks him how he makes a living. “Right now my buddy has a landscaping business…”

Oh dear. One gets the uneasy feeling that the movie is working up some kind of allegorical statement on the Condition Of Contemporary Masculinity, and a certain species of sexual tension is evoked when Brad utters the line “Let’s see the potatoes.” These considerations are magically transformed into red herrings, though, once a big hungry bear shows up. After which it’s arrgh, ugh, and ick time. MacDonald can’t be faulted in his use of special effects, judiciously dropped-out sound, and other varieties of cinematic eloquence in conveying pretty unspeakable grisliness. After which there is flight, and pursuit, and a lot of widescreen compositions in which a pursued character is scrunched into the left side of the frame, the better to give the viewer a panorama of whatever beast might pop up from behind that character.

It’s all pretty effective but in the end, somehow empty. Not to make an unfair comparison to a classic, but the movie “Deliverance” actually followed through on all of the themes that its storyline suggested, while in “Backcountry,” we end up with a storyline in which all but the most elemental stuff winds up as window dressing. Some might see this as a blessing somehow—I have to admit I’m not particularly keen on anyone’s take on the Condition Of Contemporary Masculinity anyway, but that could just be me—but at the closing of the movie, for all the unusual action and suspense it packed, I felt a sense of evasion. Also, the Godspeed You! Black Emperor sound-alike-score from Frères Lumières is a little irksome in its sound alikeness. 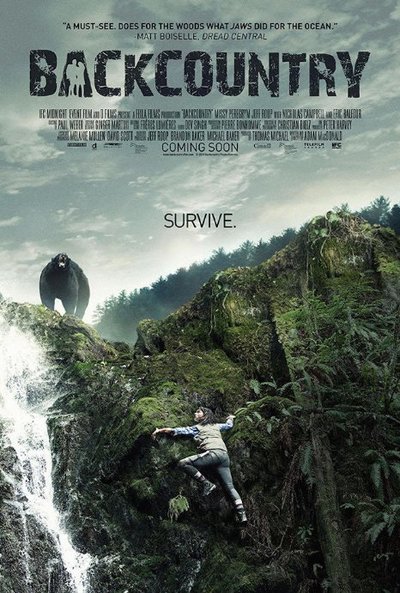