Set in El Paso, Texas, Maisie Crow’s documentary “At the Ready” takes aim at the law enforcement classes that scoop up vulnerable students who are looking for ways to help their families with the promise of a decent salary that doesn’t require going into debt for college. It’s a dose of sobering insight, captured at the height of the Trump administration and when headlines about separating families at the border dominated the news. With a class predominantly filled with Latino students, many of them with immigrant parents and relatives, the documentary follows a group of children confronted with the realities of the job that are more than just practicing arrests and active shooter training drills.

“At the Ready” opens at the beginning of the school year, complete with the awkward first day of class introductions and giddy smiles. At Horizon High School, one of roughly 900 schools in Texas that offer classes in law enforcement, students can pursue a career track that will prepare them for jobs in the police force or Border Patrol, a big draw for a border city like El Paso. In addition to in-class training, students can also sign up for an extracurricular club to compete against other schools to reenact law enforcement scenarios. The teenagers learn how to fire guns, practice paramilitary techniques, and receive narcotics training. While their classmates enjoy football games and endure the indignities of school functions, the law enforcement class practices their training as security guards at these events.

Three different voices come to stand out in Crow’s film. The first belongs to Cristina, a recent graduate of Horizon High School who became a member of Border Patrol. As the documentary progresses, she comes face-to-face with some of the crueler duties of her job, especially when young kids arrive separated from their families. Her heart is in the right place—she says over and over again she wants to help her community and help her parents—but the demands of the job force her to question the organization’s mission.

Then there’s Mason (who went by Kassy in high school), an independent trans student mostly on his own since his father is away for work. Where once he found a much needed sense of community in his law enforcement classes, he begins to question whether or not he feels like he belongs, knowing that some of the law enforcement teachers look down on LGBTQ people.

Cesar is another kind and caring student who steps up to care for his brother and help his mother around the house. He questions whether the law enforcement classes would actually help him or his family since his father has had past troubles with the law.

Crow’s camera captures the nuance of what these teens face and how law enforcement instructors and recruiters sell children on the idea of following in their footsteps. The program, which has been in place since 2009, includes a recruitment video promoting its fraternity of graduates now in law enforcement. An instructor follows up the presentation with the promise that her students will never be alone because of this network. Other instructors appeal to the kid’s sense of loyalty to their families and their communities. Students carry backpacks and hand decorated notebooks celebrating the police or Border Patrol.

"At the Ready" observes other background details, like what these kids are missing out on by not being a part of the general student population or the Thin Blue Line flag that hangs over their classroom, to explain the environment where these classes take place. Salaries are discussed both at home and in the classroom. For many students with immigrant parents, the career path to a steady job with a steady income is part of the American Dream. It’s a source of pride for their parents, and it becomes a means to help take care of their families right after high school. But for some of these students dealing with guilt, insecurity and doubt, these intensive courses become a nightmare. The students question themselves when other Latinos call them racists or traitors. The instructors plainly tell the camera they keep some of the real unpleasantries of their jobs away from the kids, like the scarier life-threatening situations or the personal toll a law enforcement career takes, yet they encourage their students to pursue these tough careers because it’s how they moved up in life. It’s a cyclical pattern that has spread in the years since the documentary was filmed.

El Paso sits just across the border from Ciudad Juárez. Many of the film’s main subjects travel over to the other side to see their families. For them, the issue of immigration and militarization hits painfully close to home, even as recruiters pitch them as assets to any law enforcement branch they join. “At the Ready” explores those tensions through a sympathetic lens, going over the many reasons that would convince young, caring students to learn how to arrest and subdue perceived bad guys and how the previous generation of law enforcement recruits to replenish its ranks. It’s a pipeline not unlike that of the military or a gang, starting with engaging kids’ interests, before they’re old enough to vote or drink, with the promise of work and a decent pay-off. That concept is scarier than watching teenagers bob and weave around their school practicing how to confront an armed suspect, and just as jarring. 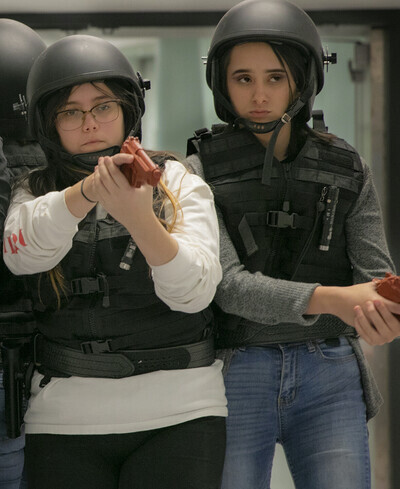