Near the final throes of director Jessica Kingdon’s shockingly incisive, observational nonfiction feature debut “Ascension,” a young woman, presumably a social media influencer, poses for an impromptu photo session in the grounds of a luxurious hotel. Opulence surrounds her as far as the photographer’s lens can see. Suddenly, however, cinematographer Nathan Truesdall unveils a landscaper in close proximity working arduously under intense heat. The jarring contrast of the two realities contained within the same frame illustrates an abominable economic gap.

As engrossing as it’s alarming, the documentary flows with a stream of consciousness about the illusion of the “Chinese Dream.” Without blunt commentary other than the subtext Kingdon instills through the curation of the material, and some candid remarks of anonymous subjects, "Ascension" ruminates on many places of employment and career-advancement programs.

On a broader scale, “Ascension” stands as a spiritual cousin to Rahul Jain’s “Machines,” an Indian film about the exploitation of poor individuals in a textile factory, but with its sights set upwards as it tracks the different layers of the Chinese social strata. Kingdon’s imagery meanwhile gives the impression of spontaneity but communicates loudly who the beneficiaries and the victims are of relentless industrial growth. Their faces are accompanied by an ominous score from composer Dan Deacon.

Slogans plastered across urban spaces preach hard work as a means to a greater quality of life, mantras not unfamiliar to those of us in the West. These generic platitudes place the burden of poverty and lack of opportunities on those most affected by them, and read as unimaginably facetious following the quite literal job market Kingdon opens with.

In a city center, recruiters call for prospective employees to enumerate the specifications of the open positions. The dismal perks, enticing in this context, include being able to do manual labor while sitting down or having a dorm located within walking distance to the factory. Companies seek working bees existing solely to increase productivity, except if you are even a day older than 38, in that case you no longer have value in this work force.

The people on camera repeatedly hint at how concerned Chinese corporations are with surpassing the United States. The myth of trickle-down economics to achieve a redistribution of wealth is also invoked. And in the digital age, physical goods are far from the most coveted acquisition, but the introduction of personal branding as pathway to riches has entrapped many, with an “instructor” flat out noting knowledge has no value if it can’t be monetized.

When the film moves from looking at marginalized the masses to zeroing in on those convinced they can attain a spot at the top, “Ascension” seems to be missing a longer note on how the hyper-society has changed interpersonal relationships. Shots of a rave or at a water park touch on that, but only in passing.

In the wake of a new ultra affluent class, businesses that cater to the elite proliferate with mandates that condone dehumanization in the name of advancement. Kingdon enters an academy that trains young men as loyal bodyguards to join security details for VIP clients, and a course that teaches service staff to act professionally even when their bosses humiliate or attack them.

Although shocking to hear in such unfiltered fashion in a foreign country, the distance to how comparable personal is treated elsewhere surely isn’t much. Similarly, classes for women to learn office etiquette that, from our Western vantage point, appear outdated—even degrading—force us to grapple with how China’s cutting-edge technology and determined competitiveness coexist with its unique worldview.

Kingdon's revelatory film is bookended by verses from a poem by her great grandfather Zheng Ze, written in 1912, the year a revolution ended imperial dynasties and transitioned the country into the Republic of China. At that moment of influx, he foresaw that voracious development, and the ascension into modernity and the chasing of grandeur, wouldn’t necessarily yield communal improvement.

Reaching the top is not always a positive step towards enlightenment if the motivation is a yearning for domination. The fixation with number one at any cost is an evil that has long plagued the United States, thus it would be blatantly hypocritical to even suggest conditions in this country are significantly better. If we are lucky, pointing a mirror to China’s extreme undertakings might evince our own monstrous faults. 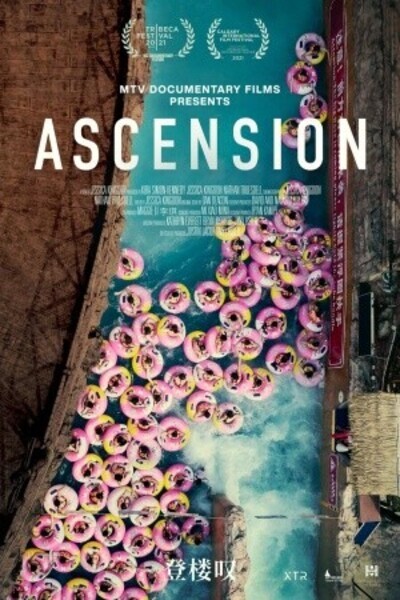