When you’re a teenager, finding a new best friend can carry the giddy thrill of falling in love for the first time. Everything is heightened; everything matters more. And connecting with someone on an intimate level who truly gets you can be intoxicating—even as you’re still figuring out who you are.

Director and co-writer Miles Joris-Peyrafitte conveys that sensation in ways that are both dreamlike and startling with his assured feature debut, “As You Are.” At only 24, Joris-Peyrafitte shows confidence and talent beyond his years, with an artful eye for imagery and a truthful ear for dialogue.

From the very start, Joris-Peyrafitte creates an intriguing contrast of moods—the push-pull between the wonder of discovery and the dread of reality. We know from the start that something terrible happens, but getting there provides a journey of joy and heartache, mystery and melancholy. Traces of Gus Van Sant abound, both visually and thematically—but that’s not such a bad thing.

“As You Are” jumps around in time between the events that bring together three very different high school students and the police investigation into the tragedy that tears them apart. Videotaped, “Rashomon”-style interviews with an unseen detective provide a variety of perspectives into the relationship between these kids as well as their reticent recollections of how things went wrong.

Loner Jack (Owen Campbell of “The Americans”) spends his days wandering the school hallways, skateboarding and watching television alone. He lives in a modest house in a middle-class neighborhood on the outskirts of Albany, N.Y., with his single mom, Karen, played by Mary Stuart Masterson. (Yes, if you feel like realizing how old you are, Mary Stuart Masterson is now the mother in angsty high school movies.) Joris-Peyrafitte creates a vivid sense of place, and Jack’s isolation within it is palpable—and yet, when he smiles at his mom, a boyish sweetness shines through.

Things start looking up when Karen introduces Jack to her new boyfriend, Tom (Scott Cohen), and his teenage son, Mark (Charlie Heaton of “Stranger Things,” eerily reminiscent of peak River Phoenix—who probably would have played this role himself if the film had been made during its early-‘90s setting). The new kid in town, Mark is everything Jack isn’t: talkative, brash and dangerous. Their initial friendship, born of proximity, soon turns into a makeshift family when Tom and Mark move into Karen and Jack’s already cramped home. The way Jack frantically tidies up his room and tries to make it look as cool as possible is a nice detail; he wants Mark to approve of his record collection, as if it were their first date.

Then a third friend enters the equation: a beautiful, confident young woman named Sarah (Amandla Stenberg of “The Hunger Games”) who alters their deepening dynamic in ways large and small, for better and for worse. The trio enjoys long afternoons of skipping class, smoking pot at the park and lazily wondering what the clouds look like. Then one day, Mark’s dad takes them all out to the woods with his handgun collection and teaches them how to shoot target practice. Clearly, this will not end well.

It’s nice for a while, though. Joris-Peyrafitte makes evocative use of slow motion to hold a moment—and an emotion—in time. And his camerawork is inspired throughout, with impressive, long tracking shots, unexpected manipulation of aspect ratio and clever angles, especially during a game of Spin the Bottle. He knows when to be show-offy and he knows when to be still, especially when it comes to the lovely, emotionally honest scenes between Campbell and Heaton.

But whatever sense of hope “As You Are” may offer, it’s always tinged with tension, because we know something has disrupted this youthful idyll. (The title, by the way, is a reference to the Nirvana song “Come As You Are,” with Kurt Cobain serving as a beacon to these music-obsessed, frustrated teens.)

Joris-Peyrafitte and co-writer Madison Harrison have created sharply drawn characters for their well-chosen cast—for the most part. Cohen, as Mark’s dad, is a one-dimensional, abusive blowhard. And while the actual act that destroys this tender friendship might seem a bit anticlimactic, the build-up to it is filled with moments that will make you hold your breath to avoid disrupting their delicacy and truth. It’s an exciting debut from an extremely promising, young filmmaker. 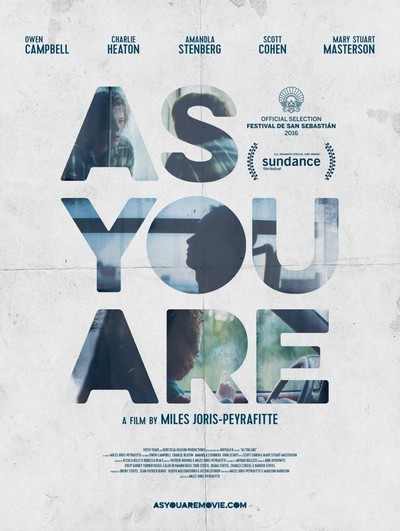