As I Open My Eyes

There are three intertwined reasons why these films are so numerous and so similar to each other. One is that, by all appearances, a chunk of the young French population feels it’s their birthright as citizens of the Republic to make a movie, and what better subject than the obvious: one’s own youth. The second is that the Republic apparently agrees with this belief, and heavily funds movies that represent “young cinema.” The third reason is that producers desirous of government munificence—and of helping young talent, of course—gladly rally to the task of mounting such fledgling efforts.

The fact that France is the capital of auteur theory additionally means that these producers rarely have much creative input or control over the films. It’s all about the vision of the young filmmaker, and that freedom, together with the propensity for autobiographical tales, is why so many of these films feel stamped from the same mold.

Leyla Bouzid’s “As I Open My Eyes” is one of this very familiar type, but there’s a reason why it’s one of the few examples headed into America cinemas. That’s because it was made by a young Arab woman and reflects on her experiences in Tunisia during the lead-up to the Arab Spring—or Jasmine Revolution, is it was called there.

This political/cultural dimension is indeed interesting and noteworthy, but the way it’s presented here makes “As I Open My Eyes” feel like two films rather oddly stitched together. For much of its length, it’s a coming-of-age tale that has Tunisian characters but feels like the standard French type (Bouzid studied filmmaking in Paris and French literature at the Sorbonne). Then, in the last act, political paranoia and revolutionary ferment burst into the story, and a different sort of film emerges.

Bouzid centers her story on 18-year-old Farah (Baya Medhaffer), a middle-class girl torn between her mother and her boyfriend and the two life paths they represent. Hayet (Ghalia Benali), her mom, is a kindly but very practical sort, and she’s understandably thrilled that her daughter’s been accepted to medical school. Farah, though, sings in a band—one of Patti Smith’s album covers hangs in her bedroom—and that’s the more romantic road associated with her boyfriend Bohrène (Montassar Ayari).

Not surprisingly, Farah devotes more time to her band and Bohrène than to mom. The band (which performs songs by Iraqi musician Khyam Allami) seems off to a strong start, and the same might said of Farah’s first big romance. The passion is new and obviously exhilarating. After making love, she kicks the sheet off Bohrène, saying she wants to see what a man’s penis looks like. (One wonders if this scene could be shown in Tunisia, or if it indicates the extent to which the film is meant for foreign viewers.)

Curiously, there’s virtually no mention of religion in the film. For that matter, politics creep into the tale only obliquely, and later. It appears we’re meant to understand that the band’s music and Farah’s lyrics have an edge of protest, but this is registered only as a very general sort of frustration and discontent.

This reviewer was in Tunisia during the time the film depicts and remembers the repressive atmosphere and sense of omnipresent surveillance prior to the popular uprising and the flight of the dictator Ben Ali. Again, though, there’s practically no discussion of politics anywhere in the film. This element enters the story only in the last act, when the band begins to think that one of its members is a police informant, and then Farah disappears into the Kafkaesque grip of the state security apparatus.

The latter event occasions the film’s two strongest scenes. In one, Farah’s mom takes her to a crowded bus station and manages to buy her the last ticket on an inter-city bus, but then Farah’s goes off to buy a drink and never returns. The mother’s frantic search through the station for her missing child has a pulse of Hitchcockian dread. The other scene, which comes soon after, shows Farah’s interrogation by two policemen. It’s done in a single take and is harrowing enough for a Costa-Gavras film.

These scenes show that Bouzid has real filmmaking talent, as do the strong performances she gets out of newcomer Medhaffer as Farah and Benali as her mother. When these two are in top form at the story’s climax, it makes you wish a strong producer had induced Bouzid to toss the coming-of-age clichés and focus the entire film on the nascent political drama that makes its latter third so much more compelling than the rest. 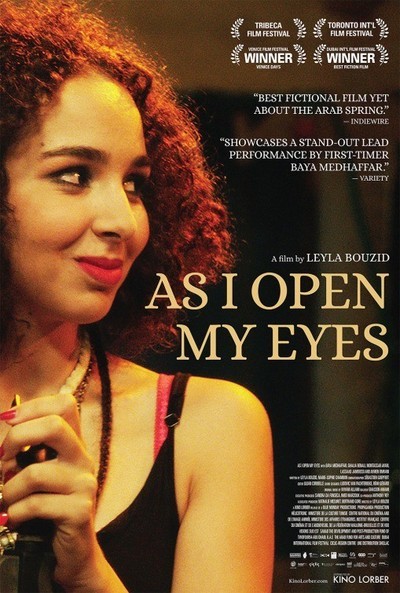