“Things are worse than ever!” is no longer just the goofiest line bellowed by an extra in “The Dark Knight,” it’s now the unofficial motto for our capital-D Divided times. Writer/director Mario Van Peebles adds his voice to an anxious chorus of Trump-era artists, but instead of an eloquent statement he offers an incoherent tangent about gun control, PTSD, pharmaceutical drugs, a missing girl, and a hillbilly militiaman who wears a hat that says “Make America Late Again.” I’m not sure why it’s “late,” but I do give the film’s poster credit for collecting Peebles’ exploding head, an American flag, and a cockroach on his shoulder, all in one image.

Set within our political climate where mass shootings outnumber national holidays 30 to 1, Van Peebles casts himself as Chief, an American figure who embodies our ails (at one point he is in both skeletal make-up, and wearing a clown nose, natch). Chief has PTSD from his days as a U.S. Marshal, after a job gone wrong that affected the rest of his team; he also occasionally has visions of cockroaches, spurring back to a childhood memory where one had laid eggs in his ear. In his new life as a barber, he tries to fight his deteriorated psyche by espousing the likes of Kipling as he cuts hair, or listening to “The Flower Duet” from “Lakme” through his white earbuds.

His peaceful existence is thrown off in the first big scene when he accidentally cuts an intimidating young gangster’s ear, leading to an extended and purposeless chase by angry gang members. Chief is tossed even further down the rabbit hole of his anxieties when a ghost from his past emerges, Jonesie (a hammy Ryan Guzman), one of his fellow Marshals. “Armed” gets some resemblance of a plot in which Jonesie tries to convince Van Peebles to get revenge against the drug companies that didn’t help with their PTSD, and to join up with their fellow buddies. But Jonesie legitimately wears a tin-foil hat, and is ooh-rah about using guns and bombs to get justice—a cause that Chief doesn’t believe in, leading to a few soundbites about Second Amendment rights.

Putting viewers through a brutal two-hour run-time in spite of its hazy narrative focus, “Armed” is perhaps no more indulgent than with its lead woman Grace (Jemma Dallender), who Chief crashes into into when sprinting from the aforementioned gangsters. A young polyamorous vegan sex worker with a British accent and instant liking for Chief, she brings out the stranger impulses of Van Peebles' I-wrote-this-today-let's-shoot-it mentality, like when she’s shown filming a woman dancing at the beach and Van Peebles is just a lighting bounce card, before bouncing himself. Or later, she’s shown dancing on a tree stump while being filmed by her drone. It’s baffling, however merciful, that Van Peebles finds a way to shoehorn this character into the lingering missing girl plot, which itself then turns into Mario Van Peebles vs. Militant Trump Voters in the third act.

As much as plot doesn’t exist, "Armed" does have the reoccurring talking point of PTSD, appearing in sporadic nervous moments Van Peebles portrays without depth. It’s a very broad depiction, articulated by shaky cameras and disorienting cross-cuts to earlier times. In the narrative's rambunctious ways, he of course uses this for a mega twist that proves fruitless to his bland thesis that PTSD exists.

“Armed” wants you to know that this is all based on a true story, so it tells you that at the beginning and also the end, in case you missed it the first time. The “true story” comes from gun ownership facts, which are shared in text with #gunfacts. But this is where Peebles’ rinky-dink political screed gets especially tasteless, as his footage flashes the faces of real mass shooters among as if they were simply horror villains in a montage. The accompanying music? A song-ified version of Chief's last bit of dialogue, his remorseful words about his last actions accompanied by autotune and a lazy club beat. It isn’t so much a critique on America in 2018, but another tone-deaf artistic stroke.

Peebles’ clear goal with "Armed" is to tackle the insanity of our time by matching it with his own circus; there's so much on its mind with no end in sight. But the disaster of “Armed” is more on Van Peebles, who can’t unite his ideas in a serious or even trashy way, making those "Purge" movies shine in comparison. However, I do take a little comfort in that “Armed” just may be an even bigger mess than the current state of our nation. Maybe. 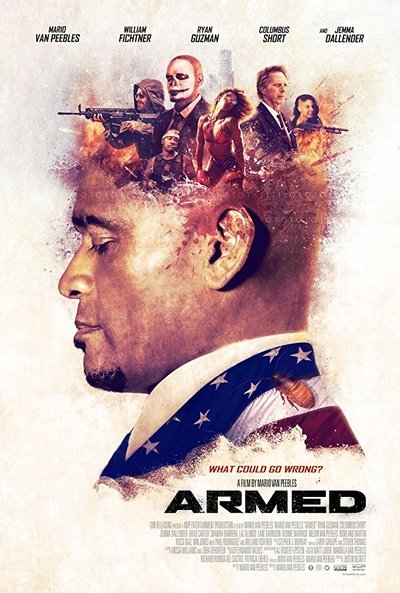 Rated R for violence, language throughout including some sexual references, and for graphic nudity.