Oren Peli is a little obsessed with people going places they don’t belong. Whether it’s the poor travelers in “The Chernobyl Diaries” or the treacherous journey of TV’s “The River,” both of which Peli wrote, the filmmaker has an undeniable interest in those who see the well-defined border, cross it, and suffer the consequences. It’s somewhat ironic that the series for which Peli will likely always be most associated is about people who never leave their home. In 2007, “Paranormal Activity” not only launched a franchise (a SIXTH film called “Paranormal Activity: The Ghost Dimension” is coming out this year, and Peli has been producer on all of them) but essentially spun off another one as Peli tweaked his haunted house formula and produced the “Insidious” films as well. Peli is a horror icon and yet, until today, only one film he has ever directed appeared in theaters. Eight years later, through ridiculous post-production delays and reshoots, “Area 51” is finally here, perhaps trying to avoid the appellation of sophomore slump by taking so long to get to theaters and being relatively unceremoniously released in select theaters and on VOD. Nice try.

Of course, like “Paranormal Activity,” most of “Area 51” looks like DIY, found-footage material, although the film so quickly fails the Why Would They Film That test that it’s best to just consider it a cinematographic choice (like Dogme 95) instead of trying to figure out who’s holding the camera and why. To that end, the shaky-cam, found-footage thing likely wasn’t as played out when Peli started filming “Area 51” in 2009, and the aesthetic here isn’t quite as annoying as it sometimes can be in “Paranormal Activity” wannabes. You won’t need Dramamine.

Three dude-bros go to a party; one dude-bro goes missing. He pops up, horror movie-style, in front of the car of his leaving buddies, not quite looking the same. Three months later, the man-children plan a trip to Vegas, where they will meet someone who will help them infiltrate the legendary Area 51, the Nevada government complex rumored for decades to house proof of alien life. Of course, they need a stop-off at the Hooters Casino first. Before you know it, they’re using night vision cameras and breaking into places they shouldn’t be.

Well, not exactly before you know it. “Area 51” is essentially what we call a Slow Burn horror film, in that most of the bulk of the running time consists of preparation. They talk about the titular location way more than anything else. And there’s a disturbing amount of prep to do—scenes of the boys getting their materials together, scouting the location, dealing with security and eventual knocks on their door in the middle of the night. There’s no tension or action for the longest time and "Area 51" might have been better served as a short film or episode of an anthology series in that the entire first-hour of set-up could have been cut to five minutes. In one mildly entertaining interlude, the film echoes “Willow Creek” a bit when the boys start talking to locals about the alien legend (a la the way Bobcat Goldthwait plays with mythology in the first two acts of his bigfoot film), but Peli isn’t as skilled a filmmaker and the characters here are so paper-thin that I just watched the movie and I’m not sure I could pick them out of a line-up.

Eventually, they get where they’re going and there’s lots of whispering (“Let’s keep moving”) but very little actual threat. When they find a lab with weird blobby things and floating rocks, things start to get more interesting, but that’s not until the hour-mark. Sorry, spoiler I guess, but I’m not sure if it’s really a spoiler if it’s the first interesting thing that happens in a movie. To be fair, the slow burn does eventually catch fire and there’s lots of screaming and heavy breathing and dark tunnels and running and what-not. The relatively tense final half-hour is clearly the reason that very smart producer Jason Blum thought this would be a solid follow-up to “Paranormal Activity.” It’s that first hour that is the reason it took six years to (barely) get released. 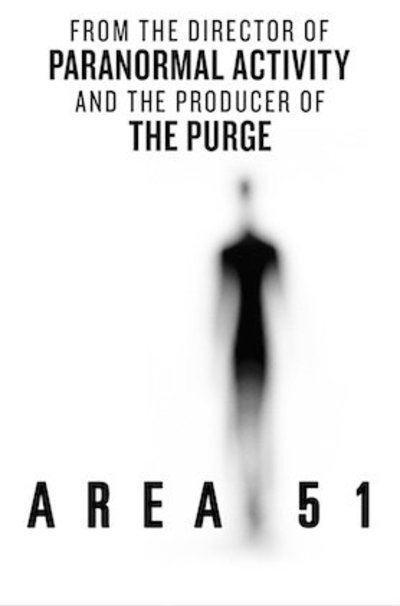 Rated R language throughout, and some sexuality/nudity