I don’t want to burden you with my petty professional problems, but writing movie reviews in the age of the spoiler-sensitive consumer can be a little trying at times. And this time is one of them. Written and directed by Sean Ellis, “Anthropoid,” despite a title that to some might seem to promise a “Predator”-style sci-fi thriller, is in fact a historical drama based, as they like to say, on true events.

The events take place in Nazi-occupied Czechoslovakia in the early 1940s. As students of World War II should know—well, as anyone should know, really, but let’s not get into that—Czechoslovakia was for all intents and purposes handed over to Germany in 1939, which gave Hitler access to a wealth of natural resources and manufacturing power to fuel the German war machine which then went on to conquer Poland and put the Second World War into active motion. The SS was terribly efficient in quashing the Czechoslovakian resistance movement, but a Czech government in absentia kept up the effort, and in late 1941 it flew a plane from England and dispatched parachutists to drop outside of Prague, where they were to begin a daring and divisive mission.

The movie begins by following two parachutists, Jan (Jamie Dornan) and Josef (Cillian Murphy). Josef cuts his foot badly on the way down and needs some stitching up. Contemporary movies like to signal their integrity and/or authenticity by including graphic scenes depicting the suturing of icky wounds, and this one is no exception. The duo’s bad luck continues, as they are sniffed out and then nearly sold out by a couple of quasi-quisling farm folk. And then, once they get to Prague and make their contacts, the remnants of the Czechoslovakian resistance with whom they have to work are in large part appalled by the mission they’ve come to carry out. That is, the assassination of Reinhard Heydrich, engineer of the Final Solution and the iron fist personally dispatched by Hitler to crush resistance, a man nicknamed “the Butcher of Prague.”

So here’s where the spoiler question comes in: do these heroes pull it off? Well, the answer to that is part of the historical record, and yet, who knows. Some folks might want to go into this movie blind, or semi-blind, or what have you. For myself, I found the picture a frustrating experience. It is cast with largely British actors, which is fine, but it does not follow what I now consider the anachronistic convention of having them speak with their native accents; rather, Ellis makes the performers speak English in heavy Czech, or “Czech” accents—I don’t have the ear to make a pronouncement as to how accurate they are, although all the actors are dedicated and expert professionals. In any event, this strategy kind of made me yearn for the anachronistic practice, which at least had a kind of inherent consistency. I also found the movie’s style off-putting. It’s shot in widescreen format, about a 2.35 ratio, but almost all of the shots are handheld. A lot of the time the experience of the movie is like looking at a very long wobbly rectangle, and the frequently abrupt cutting doesn’t help. The tighter the aspect ratio, the more effective the hand-held, or simulated hand-held, camerawork is, I’ve found. The movie’s scenario also trucks in a variety of clichés. And, near the end, at least one mistaken, overstated metaphor.

That said, “Anthropoid” has one hell of a story to tell, a story that once again reminds us of a savagery that is not so far in humanity’s past that we need to stop being reminded of it. The movie’s final scene, in which a scant number of resistance members are trapped in a church being overrun by Nazi soldiers, is loud and implacable and vivid. It’s not great filmmaking at the level of Wajda’s “Kanal,” which, not to put too fine a point on it, is a movie anybody definitely ought to see before checking out this one, but it’s effective enough. 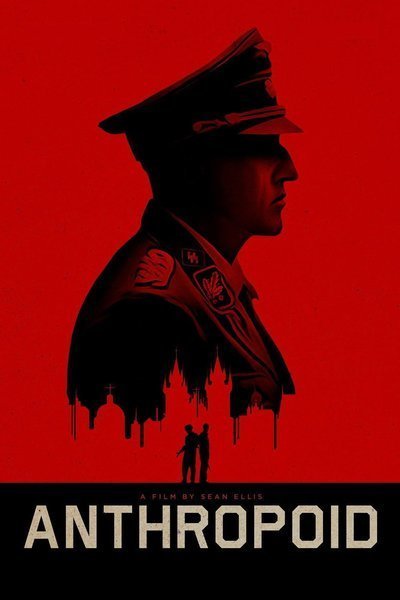 Rated R for violence and some disturbing images.