For anyone watching the new Chinese drama “Angels Wear White,” it will be all but impossible to regard its bleak and harrowing storyline without thinking of the #MeToo movement and all of the attendant scandals involving horrific cases of sexual misconduct that have been brought to light in its wake. On the one hand, since the film had its premiere at last year’s Venice Film Festival just before all of the news broke, this is merely a coincidence. On the other hand, it adds an extra level of resonance to this hard-hitting drama that shows how such misbehavior is not limited to the corridors of power in the usual places but can even be found in the sleepy little seashore resort town in China where this particular film takes place.

There, not far away from a beach that features an enormous statue of Marilyn Monroe in her famous upskirt pose from “The Seven Year Itch,” resides a semi-seedy motel where Mia (Wen Qi), a 15-year-old undocumented migrant works cleaning rooms and doing the other jobs that no one else wants to do. One night, her older co-worker Lili (Peng Jing) takes off to meet with her punk boyfriend and she ends up manning the front desk, at one point checking in an older man and two schoolgirls into a couple of rooms. Later that night, over the security cameras, Mia witnesses the man force his way into the room with the girls, an act that she records on her phone. As it turns out, not only are the girls underage but their attacker is none other than a high-ranking police official and when word of the assault gets out, the town is rocked by the ensuing scandal.

At this point, the narrative spins off into three but equally important directions. Mia, who has been struggling to obtain an all-important ID card, could break the case wide open by turning over her video of the incident but is afraid that if it does, it would expose her undocumented and underage status and cause her to lose what little she has. The two girls, Wen (Zhou Meijun) and Xin (Zhang Xinyue) find themselves being mistreated and sold out by the very people who are supposed to protect them—Xin’s upwardly mobile parents are perfectly willing to set justice aside in exchange for a big payoff that will secure her future and avoid tarnishing her reputation while Wen’s neglectful mother (Liu Weiwei) openly blames her own child for the entire incident, going so far as to slap her around and chop off most of her hair as punishment. By comparison, Hao (Ke She), the attorney assigned to Wen and Xin’s case, has it easier than the others but as she doggedly tries to put a case together, she is reminded—as if she really needed to be—that the justice system's lofty ideals are often no match for the roadblocks that are too often put in the way of those who persist in doing the right thing instead of just looking the other way.

The film has an engrossing and powerful drama that is all the more effective for writer/director Vivian Qu’s refusal to keep the story from spinning off into lurid melodrama—all of the story points on display have the harsh bitterness of truth to them. After a while, it becomes evident that Qu is less interested in pursuing the details of the specific crimes done to the two girls as she is in charting the cruelties that women face on a regular basis just because of the casual sexism found in their daily lives. For example, Mia is informed early on by Lily’s sleazy boyfriend (Wang Yuexin) that he knows plenty of people who would pay well to claim her virginity. As for the mothers of the two girls, it becomes evident that they are less heartbroken over what has happened to their daughters than the fact they will no longer be seen as good marriage prospects because of the loss of their virginity. Even the more worldly Lily is not immune to this way of thinking, at one point undergoing a painful surgical procedure to reconstruct her hymen so that she may one day end up in a respectable marriage.

Qu keeps the story moving along in a manner that generates no small amount of tension without ever coming across as overamped and she is aided by a number of strong performances across the board. Wen Qi is excellent as Mia, which is easily the film’s trickiest role for the way that she has to figure out how to engender audience sympathy despite doing any number of things that would seem to go against that, albeit always in the name of self-preservation. Ke She is also quite good in one of the film’s only two unambiguously noble roles, that of the lawyer determined to find some degree of justice. The other, also very good, is Le Geng as the initially estranged father of Wen who ultimately proves to be the only one of all the parents involved to be truly concerned solely with finding some justice for his child instead of just a payoff.

"Angels Wear White” has a few moments where it is a little too on-the-nose for its own good, such as the lugubriously symbolic Marilyn Monroe statue and a couple of cuts to signs in the police station reading “SERVE THE PEOPLE” at times when something else entirely is being served instead. For the most part, however, this is a tough and unsparing drama that vividly brings to light the kind of narrative too many people have endured over the years, in a manner that will be recognizable and relatable to viewers regardless of where they may be from. It's hardly a barrel of laughs, to be sure, but this film is more concerned with making audiences angry at what has been the status quo for far too long and determined to bring about some much overdue change. In those key aspects, it is an undeniable success. 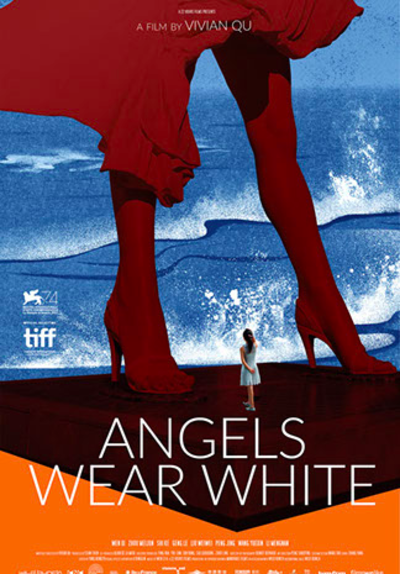