James “The Amazing” Randi, the honest liar referred to in the title of Justin Weinstein and Tyler Measom’s extraordinary, not-to-be missed documentary, is a consummate deceiver who believes deception has one legitimate purpose: entertainment. A professional magician with a long career on stage and American television, the octogenarian has delighted several generations with acts of astonishing prestidigitation and escapes from seemingly impossible traps. These, to him, are examples of honest fakery (he’s not going to reveal his tricks, only that they are tricks). What infuriates him are people, such as purported psychics and faith healers, who pretend their fakery is real.

Like Harry Houdini before him, Randi has devoted a good part of his life to exposing those he regards as charlatans and frauds. And this campaign, in his view, serves a larger purpose: encouraging a scientific worldview founded on rational skepticism and critical inquiry rather than passive credulousness.

If its account of Randi’s work as an exceptional entertainer and a zealous debunker were all that “An Honest Liar” gave us, it would be a tremendously fascinating film. But the movie also contains a third-act surprise – which won’t be revealed here – that makes it both unexpectedly revelatory and deeply moving.

Though his family background was ordinary middle-class, Randi recalls feeling different from his peers at an early age. Seeing a magician perform led him into that branch of the entertainment business as a young man, and over the succeeding decades he became such a leader in the field that he was a regular on TV variety shows, freeing himself from straitjackets, handcuffs and sealed coffins before the commercial break. He also became a fixture on Johnny Carson’s late-night show, which gave him a platform for both his magical and his polemical impulses.

His anti-fraud crusading even led him beyond American shores. Annoyed by “channelers” like Ramtha, who claimed to be possessed by a 30,000-year-old spirit, Randi invented his own mystical conduit, played by a young Venezuelan named José Alvarez, whom he coached in spouting the right supernatural mumbo-jumbo on a tour of Australia. The bogus spiritualist’s presskit was full of fake articles from non-existent newspapers, and Randi scornfully points out that not a single reporter bothered to fact-check these fraudulent sources. The tour was a big success until Randi went on TV and revealed that the whole thing was a sham.

Two of Randi’s other targets were media sensations when he went on the attack. Uri Geller, an Israeli who claimed to be a psychic, frequently appeared on entertainment shows as well as in front of scientific audiences demonstrating his supposed abilities to bend keys and perform other acts of telekinesis with his mind. When Johnny Carson’s producers ask Randi’s advice, he tells them how to keep some of Geller’s props from being able to function, and the result is that the “psychic” ends up stumped and embarrassed. Randi’s battle with Geller, it turns out, stretches over several decades.

His encounter with faith healer Peter Popof, on the other hand, leads to a more decisive outcome. Investigating how the televangelist knows of his audience’s illnesses, and even their addresses, Randi discovers the key is a simple radio: Popof has a small receiver in his ear and his minions beam him information they’ve obtained before the service, where seriously ill people are supposedly healed by the minister’s flamboyant layings-on of hands. Exposed by Randi, Popof’s ministry collapses.

Beyond countering fake miracle workers, Randi sees a serious part of his mission as educating scientists in how to detect deceptions when they are, for example, investigating psychic phenomena. But the difficulties he sometimes finds here leads into deeper questions of why people want to be deceived, and whether disabusing them contains its own ethical problems.

In one sense, Randi’s truth-telling comes off as a genuinely heroic enterprise, one that rids the culture of lots of toxic and wasteful nonsense. But in a striking scene late in the film, Randi is challenged by audience members who obviously think he’s missing larger truths in exposing small lies and deceptions. Some viewers may well feel the same. In any case, Randi can only do so much. Ultimately, both Geller and Popof resurface; the former now calls himself a “mystifier” rather than a psychic, but both are again making money with their dubious “gifts.”

And in Randi’s own life, there are different levels of truth and illusion. He evidently met José Alvarez, his accomplice in the Australian “channeling” adventure, when he was in his late 50s and the young artist was a teen. The two have been companions for a quarter-century, but Randi belongs to a different era: he only comes out of the closet as gay when he’s 81.

It’s in this private realm where the surprises of the film’s final act emerge. Not only are they dramatic, but they also give a film a human richness and an emotional power that both complement and expand “An Honest Liar”’s enthralling exploration of the contest between deception and truth-telling in one singular man’s personality. 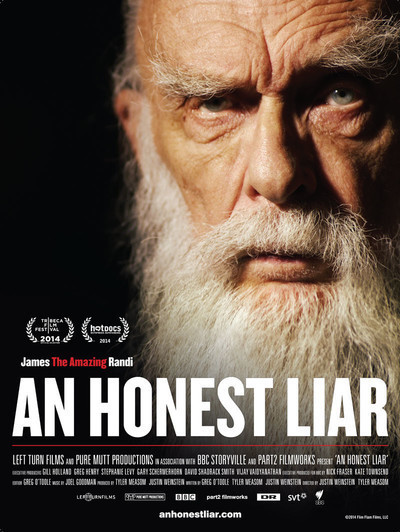 James Randi as Himself

Adam Savage as Himself

Bill Nye as Himself

Uri Geller as Himself