An Evening with Beverly Luff Linn

Directed by Jim Hosking from a script he co-wrote with David Wike, this competently assembled feature begins in what looks like a retro coffee shop. Its male employees are dressed in suits that look like I don’t even remember anymore—double-knits, maybe?—and every wide ties. But the coffee shop is advertising a new “Mid-Winter Blend,” and that kind of artisan marketing wasn’t really common in the 1970s or '80s so just when does this movie take place anyway?

I don’t want to give the impression that I myself was genuinely exasperated with these questions as I took in the deliberately stilted acting by Emile Hirsch, Aubrey Plaza, Sky Elobar and Zach Cherry in this scene. The circumscribed world Hosking creates here is deliberately unfixed in terms of period, just as the situations and dialogue are contrived for a particular feeling of unreality. Hirsch’s coffee-shop manager is named “Shane Danger,” and after a human-resources guy representing the “Bob’s” chain of which this coffee shop is a part tells him he’s got to lay off an employee, he chooses to fire his own wife, Lulu, played by Plaza.

Discussing with his two remaining employees how they’re going to weather the storm of a shrinking business, Shane announces, “I think positive all the time. Okay, I have to take a shit. Can you guys watch the shop for 25 minutes?” On his departure, the guys wonder why he needs 25 minutes.

Although Lulu tells Shane she doesn’t hold her firing against him, there is a fissure in their marriage, one that widens when Lulu learns of an upcoming stage engagement of one Beverly Luff Linn—“for one magical night.” A look through the photos in Lulu’s underwear drawer show her and Luff Linn in amorous clinches. Lulu has a past.

There ensues Shane and his buddies robbing the convenience store of Lulu’s brother (played by Sam Dissanayake). After which Lulu’s brother hires the rather shy and almost recessive gunman, or maybe the more accurate term is man who owns a gun, Colin, to get that money back. A confrontation leads to Lulu running off with Colin and the cash box to the hotel where Beverly Luff Linn, played by a very prosperous-looking Craig Robinson, is staging his magical night. Colin is besotted with Lulu but Lulu is all business, whatever that business actually is. As for Beverly Luff Linn, he is in the company of a male manager/partner who looks after his every need, and responds to everything he sees with guttural grunts and growls. Is he some kind of Frankenstein’s monster, or just in dire gastronomical distress? Mostly the latter, as it happens.

There are a lot of attempted accents of Lynch here, from the stylization of certain performances to the plywood paneling of the hotel room’s walls. Some of the silly literalism, also—a hotel bar called “The Seafarer’s Lounge” that’s presided over by a bartender wearing a ship Captain’s hat, for instance. But “An Evening With Beverly Luff Linn” not only doesn’t elicit laughter of either the raucous or uneasy varieties, it never approximates the uncanniness of an actual Lynch work. I can understand why one might think it should. Jemaine Clement’s Colin retrieving his gun from his car before approaching the Danger house, is in his way as unlikely and potentially intriguing a personage as, say, the snacking assassins played by Tim Roth and Jennifer Jason Leigh in Lynch and Mark Frost’s 2017 television series “Twin Peaks: The Return.” And yet there’s nothing numinous in Hosking’s representation. One might say it’s the difference between genuinely idiosyncratic vision and an avid desire to be different. But the answer also lies in easier-to-quantify realms; simply that Lynch’s facility with all the aspects of film language is so much greater than Hosking’s. Genius without talent can often fail. But talent without genius fails with more frequency. That said, Plaza’s and Clement’s charismatic screen presences make the failure more watchable than it might have been under different casting circumstances. 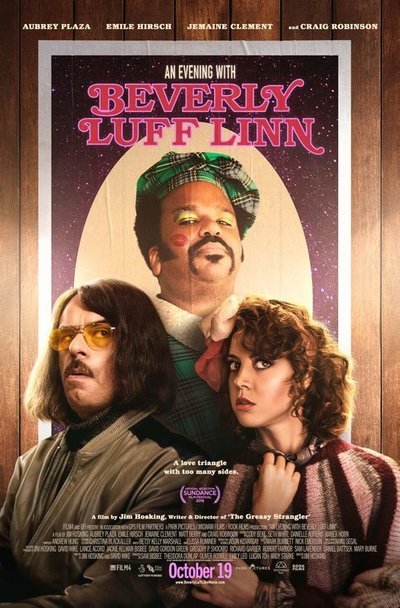 An Evening with Beverly Luff Linn (2018)

Maria Bamford as The Elegant Woman