An extraordinary documentary about race, family and education that's at once epic and intimate, "American Promise" took 14 years to complete since its premise is to follow two boys from kindergarten through high school. Actually, co-directors (and spouses) Joe Brewster and Michele Stephenson initially set out to film the scholastic careers of several children, including girls, but when all the subjects dropped out except for their own son, Idriss, and his best friend, Seun Summers, they were left with a film about two African-American boys entering a privileged, predominantly white academic environment – a focus that is essential to the film's provocative fascinations and cultural importance.

When we meet them at age five, in the late '90s, Idriss and Seun are as fortunate as they are cute. The eldest sons of stable and motivated black professional couples in Brooklyn, the boys are selected to attend Manhattan's tony, private Dalton School, an opportunity that evidently stems both from the school's new commitment to "diversity" (which involves trying to mirror the city's racial makeup) and their parents' desire to give their sons the best educations possible. Although "American Promise" wasn't the project's initial title, it perfectly captures the feeling of hope that both families evince as the boys embark on their big educational adventure.

But achievement doesn't follow opportunity as readily as one might hope. Both the lithe, delicate-featured Idriss and shy, husky Seun, in addition to being very likable kids, are smart and articulate, and their teachers and counselors seem to go out of their way to help them. Yet from early on, they seem unable to match or surpass their classroom peers, mostly kids from well-to-do white families. It's almost as if there's some invisible cultural barrier holding them back. Idriss, who slips into hip-hop patois when he goes out to play basketball with boys from the projects lest he be accused of "talking white," also perceives that he's punished at school more readily than the white kids. Is it because as a black kid he's expected to cause problems?

By middle school and the onset of adolescence, the challenges have multiplied and the parents' frustrations mounted accordingly. While Idriss and Seun seem to feel that their folks are pressuring them too relentlessly about schoolwork, the Brewsters and the Summerses say that they don't think they are being tough enough. After arriving late for a martial arts ceremony and being told by his dad that he's screwed up due to being given too much freedom, Seun turns to the camera and smirks, "They think waking up by yourself is freedom." Falling further behind academically toward the end of middle school, he leaves Dalton and moves over to Benjamin Banneker Academy, a distinguished Brooklyn public school with a mostly black student body.

The central perplexities here are summed up by a Dalton administrator who says that at their school "African-American girls do okay. But there seems to be a cultural disconnect between independent schools and African-American boys, and we see a high rate of the boys not being successful. And the question is, why? What are we doing as a school that is not supporting these guys?" Another angle on that question, meanwhile, comes from a teacher at Benjamin Banneker, who suggests that diversity itself may be a misguided goal, pointing to his school's success rate as an indication that black students often do better academically among their fellows than in situations where they feel isolated and constantly compared to more privileged classmates.

While they didn't set out to make a film about what newspaper columnists refer to as the "black male achievement gap," Brewster and Stephenson have done just that, and it's hard to imagine a more penetrating and powerful one. Since it's filmed in direct-cinema style (Michael Apted's "Up" series was an inspiration) there are no interviews with experts mulling the reasons for this gap. But that's no doubt for the best. Rather than pretending to offer any encompassing explanations or solutions for what is obviously a very complex and multi-faceted problem, the filmmakers explore it in the intimate context of two families. Seeing it that up-close and personal provides a vivid and immediate basis for discussion, and indeed, it's easy to believe that "American Promise" will be the basis for many discussions in U.S. homes and schools for years to come.

Yet as illuminating as the film is regarding one crucial issue, it is also much more than that. Watching Idriss and Seun from the time they enter school till they set off for college (a happy-enough ending for their arduous academic journeys) is a rich and rewarding experience, one that will surely make most viewers reflect on their own lives and family situations. In the cases of the families here, the challenges are sometimes overwhelming. Hit by unexpected tragedy in the latter stages of filming, the Summerses dropped out of the project for a while, but later returned, perhaps sensing that telling Seun's story in this way might well benefit others. One can only admire the courage of their decision.

A film of this scope is obviously a monumental undertaking, yet it's one that Brewster and Stephenson managed to complete while negotiating several technological changes that led documentary filmmakers from shooting on tape to digital. For all that, "American Promise" is beautifully shot (by several camera operators) and assembled. Credited editors Erin Casper, Mary Manhardt and Andrew Siwoff obviously deserve kudos for a film that is eloquently structured and consistently engaging. 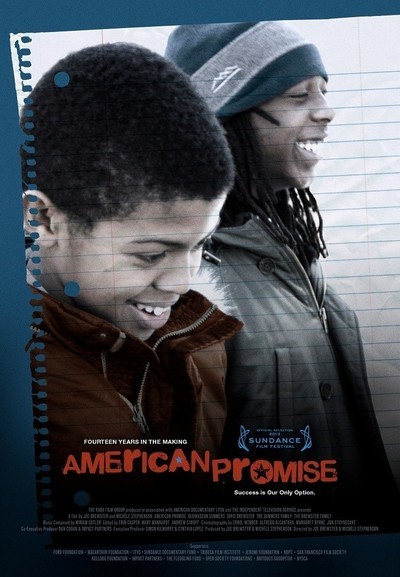