Milos Forman's "Amadeus" is one of the riskiest gambles a filmmaker has taken in a long time -- a lavish movie about Mozart that dares to be anarchic and saucy, and yet still earns the importance of tragedy. This movie is nothing like the dreary educational portraits we're used to seeing about the Great Composers, who come across as cobwebbed profundities weighed down with the burden of genius. This is Mozart as an eighteenth-century Bruce Springsteen, and yet (here is the genius of the movie) there is nothing cheap or unworthy about the approach.

"Amadeus" is not only about as much fun as you're likely to have with a movie, it also is disturbingly true. The truth enters in the character of Salieri, who tells the story. He is not a great composer, but he is a good enough composer to know greatness when he hears it, and that is why the music of Mozart breaks his heart. He knows how good it is, he sees how easily Mozart seems to compose it, and he knows that his own work looks pale and silly beside it.

The movie begins with the suggestion that Salieri might have murdered Mozart. The movie examines the ways in which this possibility might be true, and by the end of the film we feel a certain kinship with the weak and jealous Salieri -- for few of us can identify with divine genius, but many of us probably have had dark moments of urgent self-contempt in the face of those whose effortless existence illustrates our own inadequacies. Salieri, played with burning intensity by F. Murray Abraham, sits hunched in a madhouse confessing to a priest. The movie flashes back to his memories of Wolfgang Amadeus Mozart, the child genius who composed melodies of startling originality and who grew up to become a prolific, driven artist.

One of the movie's wisest decisions is to cast Mozart not as a charismatic demigod, not as a tortured superman, but as a goofy, immature, likable kid with a ridiculous laugh. The character is played by Tom Hulce, and if you saw "National Lampoon's Animal House," you may remember him as the fraternity brother who tried to seduce the mayor's daughter, while an angel and a devil whispered in his ears. Hulce would seem all wrong for Mozart, but he is absolutely right, as an unaffected young man filled with delight at his own gifts, unaware of how easily he wounds Salieri and others, tortured only by the guilt of having offended his religious and domineering father.

The film is constructed in wonderfully well-written and acted scenes -- scenes so carefully constructed, unfolding with such delight, that they play as perfect compositions of words. Most of them will be unfamiliar to those who have seen Peter Shaffer's brooding play, on which this film is based; Shaffer and Forman have brought light, life, and laughter to the material, and it plays with grace and ease. It's more human than the play; the characters are people, not throbbing packages of meaning. It centers on the relationships in Mozart's life: with his father, his wife, and Salieri. The father never can be pleased, and that creates an undercurrent affecting all of Mozart's success. The wife, played by delightful, buxom Elizabeth Berridge, contains in one person the qualities of a jolly wench and a loving partner: She likes to loll in bed all day, but also gives Mozart good, sound advice and is a forceful person in her own right. The patrons, especially Joseph II, the Austro-Hungarian emperor, are connoisseurs and dilettantes, slow to take to Mozart's new music but enchanted by the audacity with which he defends it. And then there is Salieri (F. Murray Abraham), the gaunt court composer whose special torture is to understand better than anybody else how inadequate he is, and how great Mozart is.

The movie was shot on location in Forman's native Czechoslovakia, and it looks exactly right; it fits its period comfortably, perhaps because Prague still contains so many streets and squares and buildings that could be directly from the Vienna of Mozart's day.

Perhaps his confidence in his locations gave Forman the freedom to make Mozart slightly out of period. Forman directed the film version of "Hair," and Mozart in this movie seems to share a spirit with some of the characters from "Hair." Mozart's wigs do not look like everybody else's. They have just the slightest suggestion of punk, just the smallest shading of pink. Mozart seems more a child of the 1960s than of any other age, and this interpretation of his personality -- he was an irreverent proto-hippie who trusted, if you will, his own vibes -- sounds risky, but works.

I have not mentioned the music. There's probably no need to. The music provides the understructure of the film, strong, confident, above all, clear in a way that Salieri's simple muddles only serve to illustrate. There are times when Mozart speaks the words of a child, but then the music says the same things in the language of the gods, and all is clear.

"Amadeus" is a magnificent film, full and tender and funny and charming -- and, at the end, sad and angry, too, because in the character of Salieri it has given us a way to understand not only greatness, but our own lack of it. This movie's fundamental question, I think, is whether we can learn to be grateful for the happiness of others, and that, of course, is a test for sainthood. How many movies ask such questions and succeed in being fun, as well? 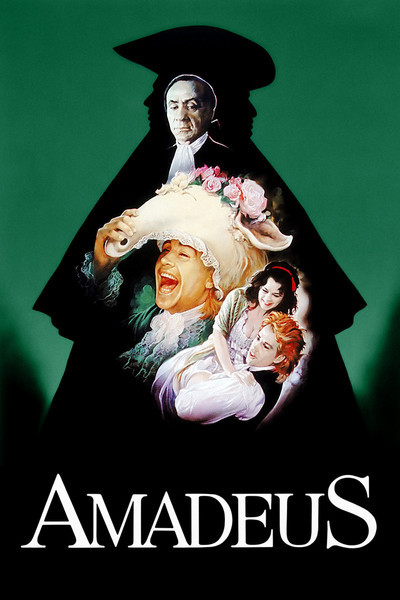