“I want to clean my soul now, after this story,” says Pastor Gennadiy Mokhnenko, the subject of "Almost Holy." The remark comes after we learn about a deaf Ukrainian teenager whose adult housemate spent years sexually assaulting her, at one point impregnating her and taking the baby to a destination unknown. The teenager has arrived at Pilgrim Republic rehabilitation center, an organization run by Pastor Gennadiy to help children get off the street and off drugs. In sign language, the distraught young woman repeatedly asks if the pastor can find and return her daughter. He promises to try. He also confronts the housemate, using language that, while appropriate, is surprising to hear from a preacher.

Pastor Gennadiy, or Crocodile Gennadiy as he calls himself, is more than a man of God. He is a prominent figure in the Ukraine, where his tough love activism is equally controversial and revered. His means of assisting young street children hooked on heroin occasionally borders on abduction. “Almost Holy” introduces us to several of these children, including the eight kids Mokhnenko added to his existing family of three. Additionally, we meet Pilgrim workers who were saved by its founder and are now paying it forward by assisting and advising.

“Almost Holy” shows Crocodile Gennadiy at work, taking us into the sewers and the mean streets of Mariupol, Ukraine. Some of the imagery is horrific, but at no time is it exploitative or used as poverty porn as in the similarly themed “Trash” and “Slumdog Millionaire." Aided by an unobtrusive score by Atticus Ross (“The Social Network”), director Steve Hoover maintains a strict, naturalistic hold on the material that never telegraphs how we are supposed to feel, nor does it make its subjects into unrecognizable others. It helps that “Almost Holy” presents this material as a series of stories Crocodile Gennadiy is telling during a speaking engagement at a women’s penitentiary. We become flies on the wall, destined to listen and learn rather than pity and feel superior.

Mokhnenko explains that his “Crocodile” moniker comes not from Paul Hogan, but from a famous Soviet cartoon with a crocodile character that shares both his name and his penchant for helping people. The crocodile’s sidekick is a dog with a coif straight out of a Bronner Brothers hair show. Mokhnenko’s cartoon alter ego shows up occasionally in animated interludes, antagonized by a mean old lady who has definitely read Ayn Rand. These moments are cleverly used, welcome respites from a harsh, cold reality; if only things were as easy for the real Crocodile Gennadiy as they are for his cartoon counterpart.

“Almost Holy” is broken down into three time frames, starting with 2000-2008 and working up to the present day. It charts the changing political and social state of Ukraine up to Putin, Crimea and the current state of unrest the country is facing. As the protests get closer to Mariupol, the film juxtaposes this battle to save Ukraine with Crocodile Gennadiy’s ongoing crusade to save its children.

Though “Almost Holy” holds its humble hero in a higher esteem than some viewers may (a shot of his silhouette looming against a fireworks-filled sky plays almost like a Marvel comic panel), it also treats everyone else with more dignity than you may expect. This includes the children who are trying to detox, as well as the mysterious woman who sells them the opiate drugs that addict them. She has an aura of mystery that the film maintains; she becomes a symbolic representation of the problem.

Terrence Malick is one of the producers of "Almost Holy," and while Hoover doesn’t go for a full interpretation/realization of his style, there are touches that evoke the director’s work, especially in the film’s last sequence. (The lingering final shot is pure Malick.) Like with Malick's "The Tree of Life," water plays a significant visual role in the film, and there are meditative views of religious imagery that hang around onscreen while Mokhnenko narrates on the soundtrack.

“Almost Holy” provides no easy answers, nor does it coddle us with the promise of a happy ending for those Crocodile Gennadiy helps. Even he says, with some stoicism, that circumstances beyond his control often hinder his success rate. People are going to do whatever they think is best for themselves, even if it isn’t. But that’s no excuse not to try to help anyway. To the filmmakers, Pastor Gennadiy Mokhnenko is a bit of a superhero. I found myself leaning that way too. 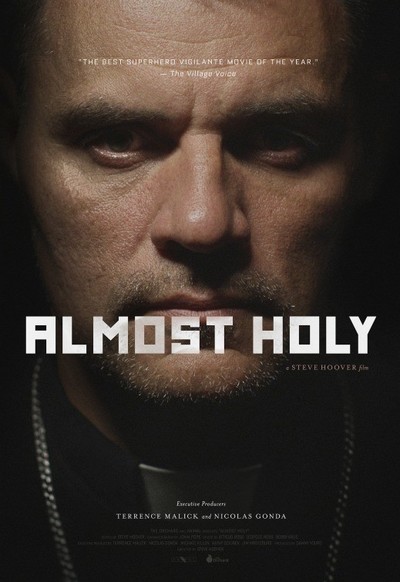 Gennadiy Mokhnenko as Himself