The ruminative and moving “All That Breathes” opens with a shot of a dark landscape as a camera moves over the littered ground in the city of New Delhi. As other animals lurk in the background, the garbage in the street is food to the rats that scurry in an unfocused frame, the noise they make getting louder as more of them feed. As their hungry noise grows in volume, car headlights get brighter in the distance, a sign of the humanity in the background that has impacted this existence, the shot ending with it being overtaken by that white light. It’s just the first of several absolutely breathtaking images in this masterful documentary from Shaunak Sen. "All That Breathes" blends a verité-style character study with gorgeous nature cinematography while never losing the film’s overall commentary on how man interacts with nature—or merely chooses to destroy it through inaction.

Sen focuses on a pair of siblings, Nadeem Shehzad and his younger brother Mohammad Saud. These gentle, modest residents of New Delhi have devoted nearly the last 20 years of their lives to caring for injured birds known as black kites, reportedly treating over 20,000 of them. New Delhi is one of the most polluted cities on the planet and the intrusion of the industry has forever impacted the wildlife, especially the birds that so gracefully glide over the city’s horizon. Sen regularly frames the kites against a cloud of smoke or a smog-shrouded cityscape, almost making their plight as visible as watching a drowning animal.

However, Sen also finds SO much beauty in everyday nature. There are shots in “All That Breathes” that are among the best of the year, from a group of bugs drinking from a pool of water in which the reflection of humans can be seen walking by or an unforgettable one that tracks down a crowded apartment building to a river below where wild pigs are crossing as horses stand on the banks. Human and animal life is not divided in a city like New Delhi—it is all part of the same tableau, and Sen’s film captures it with a blend of striking beauty and empathetic fragility.

“All That Breathes” is not a traditional wildlife or climate change documentary. It doesn't have talking heads or on-screen facts. The information that’s garnered about the plight of the Delhi kites comes from Nadeem and Saud, who face their own challenges trying to stay afloat in an increasingly fraught region of the world when it comes to social issues, politics, and class. Sen tracks difficulties between Saud and Nadeem as economic pressure and new legislation against Muslim citizens intrude on their good work. It’s a film that keenly understands that caring for all that breathes isn’t as easy as a good intention, and that it often requires intense sacrifice and commitment.

“Humans often forget they’re also pieces of meat,” says one of the brothers early in the film, and “All That Breathes” serves as a great leveling of the natural playing field. Just as the black kites are struggling against the polluted sky, the brothers who care for them are fighting against a rising tide of injustice that could force them to drop from their own sky too. Who will care for them when they do?

Nadeem and Saud reportedly looked to the sky as an escape from their upbringing in a working-class Muslim neighborhood, and they believe that feeding and caring for birds eats away their difficulties and earns them a form of religious credit. What happens if that’s gone? What happens when kids like them look up and don’t see the escape captured in the flight of the kite? What happens when the pigs and horses aren’t sharing space near the humans of New Delhi? What will we lose when we no longer value these things? “All That Breathes” isn’t just a gorgeously poetic display of the natural world but a reframing of why these things should matter not just to people as devoted as Nadeem and Saud but to all of us. 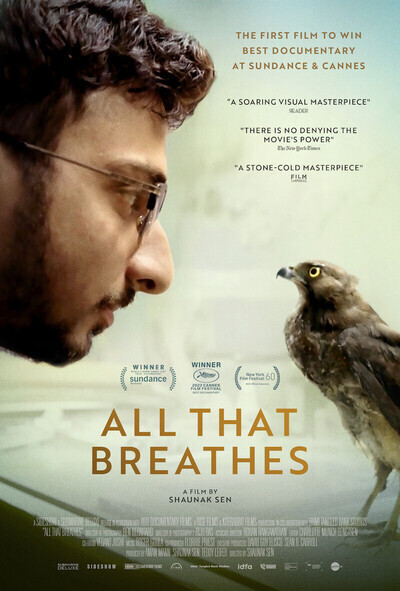