Phil Morrison's "All is Bright" is half-bright. Roughly one half of it is brilliant absurdist comedy in the low-key Bill Forsyth style. The rest is such a calculated balance of mumbly realism and crowd-pandering Christmastime cuteness that I predict an "All is Bright" series will end up on NBC's Thursday night lineup.

Right up front, some viewers will have a problem (unfairly, I say) with the apparent passivity of the protagonist, Dennis (Paul Giamatti), a Quebeqois robber who learns only after being released from prison that his former accomplice and friend is dating the mother of his child. Said wife (Amy Landecker) warns Dennis not to reveal himself to their tween daughter, whom she's told that her daddy died of cancer. Dennis has a brief fit of rage at the wife and later lands one punch on the accomplice, Rene (Paul Rudd), but he somehow doesn't kill either of them in a crime of passion. Homeless and desperate for work, he tags along with his betrayer on a trip to New York to sell Christmas trees. That's not the implausible part, since most newly released prisoners become masters at pragmatism, reining in their emotions for fear of being sent right back to the hell they just escaped. The truly absurd developments in "All is Bright" are small, false moments here and there that ultimately undermine the delicately observed and truthful ones:

1. It's hard to believe that the guileless but emotionally intelligent Rene would be so brazen in disrespect to Dennis, taking lovey-dovey phone calls from the woman he stole from Dennis right in front of him. That's asking for another punch in the face, or worse.

2. It's tough to imagine a Homeland Security-era American border patrol officer so lax and bribe-able as the one who appears in this film when Rene and Dennis go to New York to sell Christmas trees.

3. Sally Hawkins' creamy Russian dressing accent makes you wonder whether there were no suitable Russian actresses available to play "sassy immigrant neighbor" in New York at the time of filming. (But I laughed out loud when she said, "…like Vunna White on 'Fortune Wheel….'")

4. Dennis' psychotic bullying and mugging of an innocent rival tree salesman doesn't square with the film's attempt to make him seem lovably harmless deep down. Nor with the fact that, as a parolee illegally out of his home country, he'd be doing everything possible to lay low.

5. Diner owners in laidback Greenpoint, Brooklyn who are so obnoxious as to snatch Dennis out of their bathroom mid-pee because he isn't a paying customer. Nowhere in Brooklyn has this ever happened. Worse, the moment is scored to a warm Christmas ballad, for leaden irony. Much later, after he's somehow made amends with the assholes and sets a few bills on the counter en route to the john, the same jerk who ejected him now accepts his cash with a sneering, "F@$k you very much!" Nothing like this has ever happened anywhere.

6. Dennis and Rene take so many foolish risks for the sake of formulaic (if subtly played) comic set pieces that it becomes clear that Morrison and screenwriter Melissa James Gibson are more interested in yuks worthy of a Sundance Audience Award than considering what could be funny or suspenseful in a more realistic scenario. A comical jazz combo instructs us not to take anything too seriously.

Generally, Giamatti and Rudd do their part to give this film some unpredictable life outside of its surefire formulas, but Morrison just doesn't take enough advantage of the neighborhood (which, full disclosure, I lived in this summer and can attest is overflowing with far more interesting life forms than the stock extras seen here) to make their quest seem situated in a world rather than a (barely) colorful backdrop. Such would better serve the subtext, set up early on, of an economic scramble as brisk and merciless as the winter winds.

But if you're looking for cute, "All is Bright" has it for days. I wish I could give four stars to Giamatti's big, sad eyes and outrageous Civil War beard. Rudd is great at playing a friend whose bumbling makes you draw back a hand to slap him only to lower it gently on his head, like a beguiled puppy owner. That kind of thing only goes so far, and by the film's pack-of-lies Christmas morning ending, the eggnog has curdled. 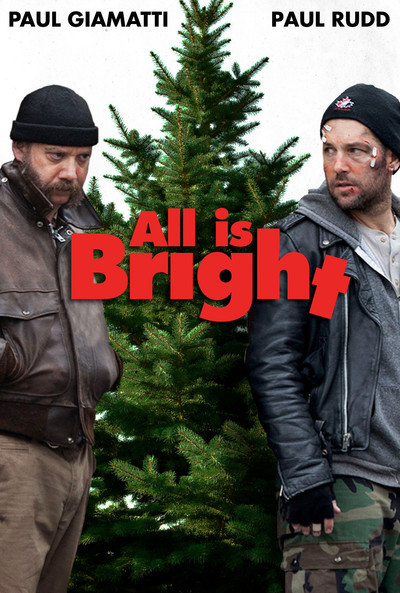