The thrills come sporadically in Il Cho's “#Alive,” a zombie movie that would stand out so much more if it had even just a little personality, or a twist to add to the cinematic tradition of zombie apocalypses. Instead, “#Alive” merely lurches from mediocrity, and despite a relatable depiction of one man quarantining from a deadly virus, it's the blood-covered zombies who are much more fun to watch.

Such is the case when your lead character is underwritten, even if the actor playing him is especially charismatic (Ah-In Yoo, previously of "Burning"). Before everything falls apart, we learn that Jun-u is a tech-savvy, PC gamer who lives with his parents in an apartment complex in Seoul. That's about it. During these moments, he’s not very interesting, or exciting to be stuck with. He's more of a stand-in for generic young folk, presumably to let them fill in the blank. Given that the movie echoes modern isolation in more ways than one, it feels like a totally missed opportunity, in which the movie's surprisingly self-serious tone is partially at fault.

When a mysterious virus turns his fellow citizens into flesh-eating monsters, Jun-u chooses survival. From the beginning, he tells himself that he will survive, and organizes his food, insulates himself indoors, and even drinks some of dad’s fancy booze. But that towering kind of self-assurance also means he can fall just as hard. He video-logs his emotional journey as things get worse when food starts to run out, and loneliness starts to really kick in, making for some all-out emotional work from Yoo. Right before he gives up permanently, he learns of another tenant, Yu-bin (Shin-Hye Park) across the way. She too has figured out her own system of survival, and is even craftier (as with a chair with spikes that's used as a trap for her front door). But as she gets her own screen-time in "#Alive," her can-do character is more of an embodied attitude than someone to deeply care for, making her part of the story as shallow as his.

Their goal is to survive, something that's emphasized by these two strong lead performances, a very basic message, and the narrow plotting in Matt Naylor's script. “#Alive” is one of those zombie movies that simply looks at the apocalypse as a test about choosing hope—sometimes they struggle with it, especially as they often have to fight off the hordes of zombies coming their way. But true to the story's sentimentality, good news often comes with all too convenient timing.

There’s nothing all that original about “#Alive,” which has an extremely similar premise to the superior 2018 French film “The Night Eats the World,” and yet such unoriginality is not the biggest issue. Instead, it’s more that “#Alive” hardly tries to do something new, and leaves its few surprises to a loud jump scare here, or a nifty zombie kill there. The bursts of action that some might call inspired are underwhelming, like an anticlimactic scene in which a zombie dangles on the side of a balcony, swatting at a pesky drone commandeered by Jun-u.

“#Alive” is the middle-ground of a zombie story, in that its bleeding heart emotions are unmistakable, and the zombie stuff can be good enough, with detailed make-up work and creepy choreography creating some nightmarish extras. It's more that the film is built for low expectations, and you either accept it or else. When you're looking for something to hold onto, it’s not fun when a movie is constantly confirming to you that this is all there is. 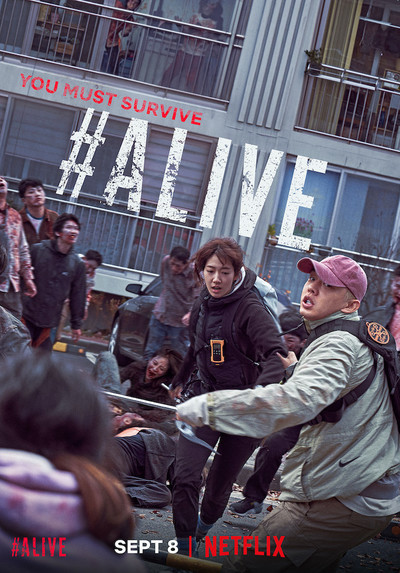