There is something bothering Alice. She’s underwater, watching the murky light and floating seaweed above her. She is not swimming back up for air—at least not yet. The scene is a precursor to something that will happen later in the movie “Alice, Darling,” but it’s also a visual metaphor for the character’s state of mind. In reality, she’s back on land, meeting her friends at a restaurant in the city. Although she’s in good company now, her mind is elsewhere. Below the surface of her smile, Alice (Anna Kendrick) is holding on to an abusive partner, Simon (Charlie Carrick), a truth revealed in a handful of uncomfortable conversations, guilt trips, and anxious behavior like pulling out her hair and panic attacks. Her relationship’s red flags are as clear as flashing billboard signs for her worried friends, but Alice looks past these warnings as if they’re her partner’s love language. Under the guise of a birthday getaway, her friends Sophie (Wunmi Mosaku) and Tess (Kaniehtiio Horn) stage an intervention for their friend sinking away from them: swim up and get out. Save yourself.

Mary Nighy’s feature debut “Alice, Darling” is a straightforward drama about getting caught in the undertow of a bad romance. The telltale signs seem obvious to outsiders like her friends and viewers, but for Alice, she’s still performing the mental gymnastics of justifying his controlling demands to her body, attention, and time and interpreting them as love and affection. She’s dug into a defensive position and unable to see the damage Simon’s behavior has caused her, how she fears asking for time for herself, how suffocatingly he clings to her skin.

Nighy balances these perspectives as generously as she can. Almost every exchange or nervous glance from friend to friend or lover to lover feels like a hostage negotiation. What should be tender moments between the young couple are often cruel rounds of verbal and emotional abuse. The tension of the situation is baked within every confrontational staging between the pair or how detached Alice looks and feels from her friends. Even when Simon isn’t physically there in the scene, the fallout of his presence is visually evident. It’s isolated Alice from those who truly care about her.

The murkiness in Alice’s relationship carries over to the film’s aesthetics thanks to cinematographer Mike McLaughlin. Alice’s world looks a little less bright than the one her friends live in, as if she only ever ventures out on overcast days. There’s a warm tone to the girlfriend’s cabin trip to the woods, but something still looks off, like the peace and serenity of the location are somehow missing. In a move that overcomplicates the already tense drama at hand, Alanna Francis’ script adds an element of danger to their trip through a subplot about a missing young woman. Alice becomes fixated on her, perhaps fatalistically so, and the mystery becomes an excuse for Simon to escalate his control over her. Maybe it’s to be a cautionary tale for Alice or something to entice her to escape, but none of this quite pans out as effectively as her narrative journey with her friends.

As the movie’s namesake, Kendrick embodies the tortured feeling of holding onto someone harmful. Alice tells her friends, “He wouldn’t love me if he knew how bad I am,” justifying her mistreatment repeatedly to them and herself. Kendrick’s performance is a stunning departure from her usual bubbly screen presence. That persona fades behind the distracted stare of a person who has to calculate every pro and con of what they say before they say it. She is overwhelmed by the pressure and unable to swim up for air, an SOS which Kendrick communicates through a range of reactions, from catatonic vacant stares to succumbing to heaving waves of a panic attack on the bathroom floor. She’s committed to this story and her character.

Kendrick’s performance is one of the strongest aspects of “Alice, Darling.” Under Nighy’s direction, they create an emotional portrait of someone on the verge of being lost to a warped distortion of love but who realizes they were surrounded by the real thing the entire time. For every cutting remark Simon makes at her expense, her friends are trying to rescue the person they knew before. That tension makes for good drama, but it takes the team’s sensitivity to make it feel as authentic as it does. It’s a relief when the credits roll, not unlike taking your first breath of fresh air after holding it underwater. 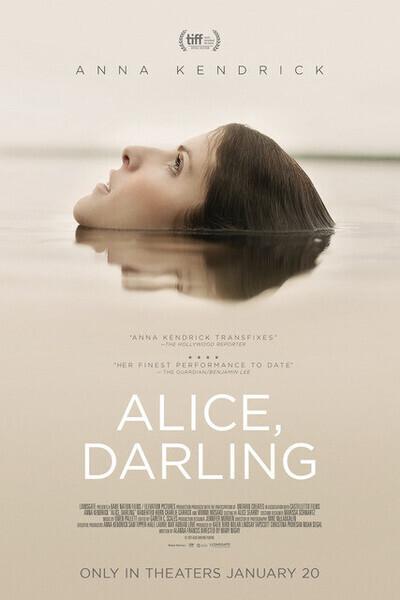