Ava, played by the superb Claire Rushbrook, is a woman who carries herself with the confidence of someone who knows what she’s about. A newish widow, a mom with a few adult-age kids and a few more grandchildren, she pours her surplus love for kids into her work at an elementary school in the British city of Bradford. Early on in this movie, written and directed by Clio Barnard, we get an idea of what she’s missing. Riding on a bus, she sees a couple of young lover sitting in a row in front of her, and the wistful look she directs their way is a heartbreaker.

The lack felt by Ali (the very winning Adeel Akhtar) is a little more complicated. A Pakistani immigrant, he’s gotten ahead enough in life to be a landlord, and he’s not an avaricious one; rather, he takes what seems to be a genuine interest in the lives of his tenants, who are also migrants. But his marriage is fracturing in a humiliating way: his soon-to-be ex-wife Runa (Ellora Torchia) doesn’t take him at all seriously, but both of them are also confounded by the effect any announcement of estrangement will have on their family.

Why doesn’t Runa take Ali seriously? Maybe it’s the whole wannabe DJ thing. When Ali takes the daughter of a tenant, little Sofia (Ariana Bodorova), to school one day, he meets Ava, and in almost no time they’re bantering about their musical tastes. She likes folk, he hates folk; he likes punk and electronic beats, and she doesn’t know what to make of those. Soon they’re bopping around Ava’s flat, earphones in, swapping Karen Dalton and Specials tunes.

One of Ava’s adult sons barges in on them and freaks out. With slight notes of bigotry. But the explosion is soon over, and the movie continues to amble along.

This is a gentle unassuming film about gentle unassuming people. It’s possible that many viewers might find it too gentle. Barnard isn’t nearly as interested in narrative momentum as she is in just letting the viewer sit with these people. Not just to enjoy their company, such as it is, but to contemplate the vicissitudes of life and love in this particular working-class environment, an environment in which isolation is, for better or worse, virtually impossible. There’s a reason that Ali sometimes gets up in the wee small hours of the morning and rocks out with his earphones while standing on top of a car.

In its understated way, the movie is a celebration of the miracle of connection. Ava and Ali initially communicate through musical modes, but these signals reveal a deeper need: two warm hearts that need a place to share that warmth. 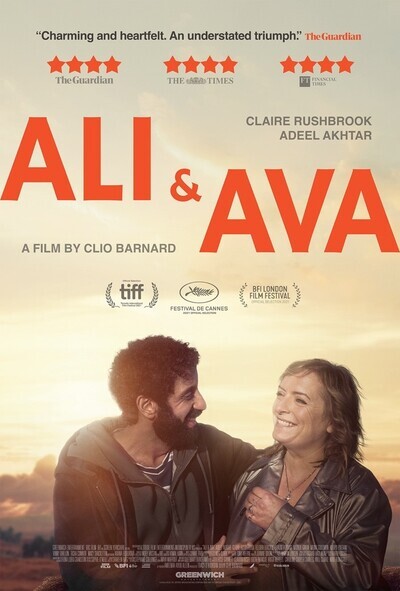