Film critic Michal Oleszczyk described "Aftermath" as a contemporary Polish answer to "Bad Day at Black Rock," a seething moral tale that pits two angry everymen against a mob. It's an apt comparison. In both films, an otherwise tranquil community oppresses a group, and two indignant outsiders respond by defending the oppressed minority, refusing to stay silent even though they were never personally menaced. But while "Bad Day at Black Rock" expresses its righteous with breathtaking Cinemascope wide-angle shots and moving monologues, "Aftermath" shows its indignation through serviceable hand-held photography and timid, bathetic dialogue. "Aftermath" is toothless, and that's inexcusable for a civics lesson that's supposed to jolt us out of complacency.

After years of living in Chicago, Franciszek (Ireneusz Czop) returns to his small Polish hometown to discover that his brother Jozef Kalina (Maciej Stuhr) has become a social pariah. At first, Jozef won't tell his brother what's going on. He resents Franciszek for having left his mother to tend to their farm after his father's death. But Francizek independently learns what happened: Jozef reclaimed Jewish residents' headstones that the town was using to re-pave their roads. He then tries to patch things up with Jozef while searching for more information on the newly-unearthed grave-markers.

Franciszek may not understand the townsfolk's anger, but writer/director Wladyslaw Pasikowski (who co-wrote Wajda's "Katyn") doesn't seem to understand it any better than he does. Jozef's neighbors send him a brutishly simple message: if you defend people we treat as outsiders, then you are an outsider, too. He's Jewish by association. This kind of blind prejudice is plausible, but not as it's shown in the film. All we really know about these people is that they don't take kindly to strangers. The town's eldest resident sneers at Franciszek because he's from America, and doesn't plan to move back to the family farm. And Jozef is beaten up at a town bar just because he and the other publicans don't like the same soccer player. Nobody explains the mob's motives save for one unnamed thug: "The Jews killed our lord, and he's standing up for them."

The community's lack of definition makes some sense, but only because "Aftermath" isn't a parable about forgiveness. Instead, Pasikowski kicks over a stone, and expects viewers to first gasp at the worms underneath, and then cheer on the film's protagonists as they struggle to put the rock back. But the film's heroes aren't that sympathetic. Franciszek has more personality than Jozef, but only because he's a stubbornly curious amateur detective. His resourcefulness is evident in scenes where he talks to the town's priest and digs up old land surveys to determine who owns which properties. But Jozef is even more of a cypher than his brother. He goes out of his way to rally his opponents against him, as in the above-mentioned bar fight, but as he tells Franciszek, he does not understand why he's compelled to protect these old tombstones.

Jozef can't articulate why he does what he does because Pasikowski thinks of him and Franciszek as working-class heroes. Franciszek may dress well, and be well off enough to replace his entire wardrobe after it's mysterious stolen. But at one point he defends his blue-collar heritage by saying that in America, he's only a construction worker, doing work that Americans don't want to do. That line of thinking suggests that it's inherently noble to be stereotypically salt-of-the-earth. When Jozef wipes down tombstones, he's proving his worth; Pasikowski seems to want us to see him as a man who does the right thing without even thinking about it. Unfortunately, in that moment, Jozef just looks like a big guy who likes to clean tombstones.

"Aftermath"'s moral compass is generally out of whack. Pasikowski never acknowledges that the lower class background his baddies come from makes them just as prone to kneejerk responses as Franciszek or Jozef. The filmmaker prefers to shame his villains rather than understand them. They begin the movie as monsters and remain monsters. This, according to the film, is what life is like. 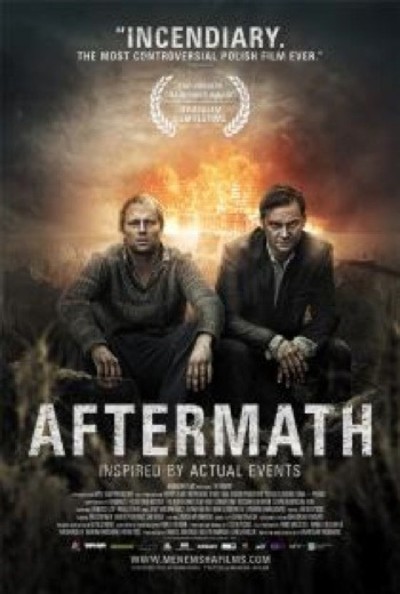