"Afflicted," a fratboy-travelogue/found footage horror film, actively courts skepticism. Like any horror film with a documentary impulse, especially films like "The Blair Witch Project" and "Chronicle," "Afflicted" tries to impress you with its creators' sincerity. In fact, real-life co-directors Derek Lee and Clif Prowse play versions of themselves. They're college BFFs on a globe-trotting adventure that winds up ruining both their lives. So naturally, their goal is to show you, the anonymous viewer, every singular and strange experience they have. They ostensibly cannot believe what's happening to them, so they film events in the hopes that you, the viewer, will recognize them as real. So in order to consistently enjoy "Afflicted" as a cinematic rollercoaster, you have to believe the people you're observing are real, and that their actions have consequences. Unfortunately, "Afflicted" is as emotionally involving as a really accomplished special-effects sizzle reel.

Admittedly, one shouldn't fault a theme park ride for not being as fulfilling as a great Russian novel. But "Afflicted" often asks you to lower your guard, and accept its protagonists as people. Derek and Clif spend much of their film's first half-hour trying to win viewers over with aw-shucks sincerity. They talk about getting laid, and burble about doing crazy, wild, forbidden things on their trip. And if you don't like Derek and Clif as carefree horndogs, wait a little longer, and you'll see them fumble for your heart-strings: Derek confesses (to the camera) that he suffers from Arteriovenous Malformation (AVM), a fatal disease. With a lemons-into-lemonade mandate in mind, Derek and Clif head to Barcelona. They want to see the world, and have lots of sex while Derek still can. But a one-night stand leaves him bloody, confused, and (you guessed it) afflicted with a mysterious disease. He spends the rest of the film trying to figure out what's happening to his body, and how he can live with his mysterious new ailment.

"Afflicted" is accordingly at it's best when Derek is most self-absorbed. Prowse and Lee aren't great performers, so it's often annoying to see them try to show you how scared, worried, or anxious they are. That having been said: once Derek learns what his disease has done to him, he realizes that he doesn't need to be nice, or put on a brave face. So early scenes, where Derek retches uncontrollably, then exhibits superhuman strength, are really exciting. Here's a character worth watching, one that's scared, proud, and nasty.

Too bad that guy's not "Afflicted"'s focus. The film's found-footage structure always takes precedence, so character motivations are always skimpy, and as-needed. Sharp jump cuts between scenes, and wooden acting, especially whenever characters are pleading to, or off-camera, constantly remind you that you're watching a work of fiction. In that context, even modest leaps in logic feel drastic. Like, the reason Clif stumbles upon Derek after his one-night stand isn't implausible. Clif wants to administer a "Turkish cockblock," because apparently he's a prick, and isn't getting any. Then again, the sheer douchey-ness of this behavior seems unbelievable given how hard Prowse pitches his bros-will-be-bros intentions to his camera. The way he conspires with his audience is clumsy, and distracting. He's supposed to be winking at his viewers, but only winds up confronting us. In that scene, you can feel the limitations of the found-footage horror film. The gimmick of watching events exclusively from a voyeur's perspective can almost never sustain itself over the course of an entire movie.

That having been said, "Afflicted" is fitfully impressive. It may be as soulful as an ambitious student film, but it's got more than enough technical brawn to be scary. Many of the film's scariest scenes are thankfully not jump scare-reliant, though they are scary for the same reasons: you can't always see what's happening. Lee and Prowse's scare tactics are only relatively more refined. Their camera doesn't bobble for its own sake, and they don't make objects fly in your face in every other scene either. Lee and Prowse accomplish what they set out to in scenes where Derek tests his new abilities, like the ones where he crushes rocks with his fists. If only they always tried so hard. 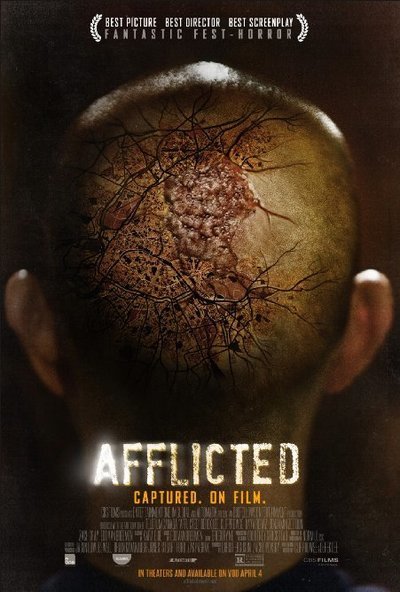