At first look, the main character of Rachel Tunnard’s feature debut “Adult Life Skills” has the makings of the quintessential millennial stereotype. Anna is adrift in her own world, works a dead-end menial job, lacks any kind of ambition and has almost no romance in her life. The biggest difference setting Anna apart from becoming a generational trope is that she doesn’t live in the basement of her mother’s home. She lives in a shed in her mom’s backyard.

Based on Tunnard’s 2014 short “Emotional Fusebox,” “Adult Life Skills” expands on Anna’s story in ways that don’t always work. However, the situations give Jodie Whittaker, the “Doctor Who” star who plays Anna in both the short and the feature, a chance to act out and act silly. Her performance humanizes the film’s troubled protagonist better than the story.

For the first half of the film, “Adult Life Skills” cloyingly hides a significant chunk of backstory from the audience for as long as possible. It’s something that made a profound effect on Anna, but even the other characters talk around what happened until much later in the movie. “Adult Life Skills” builds a guessing game around its quirky lead who likes to make home movies with her thumbs as characters. Are we supposed to laugh at Anna’s childish antics or cry with her?

The people in Anna’s life pressure her to grow up and to get out of her shed – a physical shell where she stockpiles all sorts of nostalgic memorabilia from her better days. Around Anna’s 30th birthday, her mother, Marion (Lorraine Ashbourne), pushes her to move out and find a flat. In the middle of this chaotic time, Anna’s old schoolmate, Fiona (Rachael Deering), returns to their small English town for a visit and tries to pull Anna out of her shed-shaped rut. For much of the movie, Anna rebuffs any flirting from Brendan (Brett Goldstein), an awkward realtor incapable of reading social situations. At work on a campground, Anna’s co-worker Alice (Alice Lowe) assigns her to watch over a fussy boy who wears cowboy duds, Clint (Ozzy Myers), so he doesn’t bother everyone else. He’s a bit of a menace, kind of like her, and the two become unlikely kindred spirits in their loneliness.

It is in these scenes that Whittaker gets to show some range. Her face bears a semi-permanent state of exhaustion and disbelief that her life is somehow still going on. Her clothes always look rumpled, and her hair hasn’t seen a comb in days. No matter the weather, the setting appears constantly overcast and the ground is never dry. The light behind her looks gloomy, much like her mood. She’s not suffering from millennial ennui but more likely from depression. But the movie holds onto a lighthearted tone, skirting around Anna’s issues.

Whittaker’s performance finds a balance between the tragic and comic scenarios her character experiences. She can hold a serious conversation with a mysterious man in a scuba outfit, cry out when she’s finally overwhelmed by her world, talk candidly with the young boy now constantly invading her space, fight with her dissatisfied mother and reenact existential conversations with her thumbs. There are a few bumps on the way to get to that character, but it feels rewarding to finally meet her.

We’ve seen this kind of surprising performance from Whittaker before. With her first movie role in “Venus,” she starred opposite Peter O’Toole as a young woman capable of both cruelty and vulnerability. Now, she’s growing into her role as the Doctor on the long-running BBC sci-fi show, developing the beloved character beyond what her previous 12 (give or take) counterparts have done. Her performance saves “Adult Life Skills” from itself, its distracting backwards soundtrack and Michel Gondry-esque segues. She’s grown up, I just wish this film had as well. 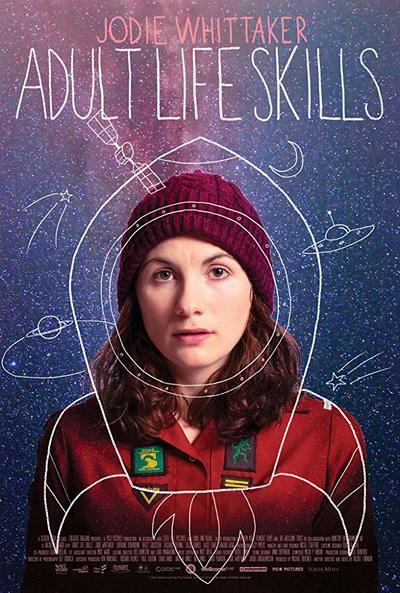