If it weren’t for the high-rise buildings within eyeshot, you could swear that the opening sequence of the acutely compassionate and probing “Acasa, My Home” was filmed in deep wilderness. During that initial scene, our gaze floats over the sun-dappled surface of a muddy marsh, following a teenaged boy as he swims in murky waters that somehow seem idyllic and catches fish with his bare hands, away from the metropolitan area he seems to be right outside of. Soon enough, he is joined by a number of young boys, whose cheery sounds we hear in a cacophony before their faces appear on camera and watch the older brother dexterously catch a wild water bird. When the poor terrified winged creature manages to escape and run for dear life, the boys go straight back to their carefree afternoon, rolling around in mud, giggling away and wresting amid tall reeds.

The drone camera then poignantly peels away from this joyous tableau to slowly reveal Bucharest from atop, juxtaposing the bustling capital against the habitat of the youngsters. They are all a part of the Romanian Enache family, an off-the-grid clan that has been residing on a deserted reservoir by the outskirts of Bucharest (named the Bucharest Delta) for nearly two decades. Considering it’s a tribe of eleven—the parents Gica and Niculina and their nine children—it’s appropriate to think of the Enaches as a small village that operates as a single unit in the earlier moments of filmmaker and investigative journalist Radu Ciorniciuc’s impressive debut documentary. It’s a patriarchal band by all accounts where Gica authoritatively calls the shots. Still, all of its members serve a clear purpose in their shared unconventional life. Living in extreme poverty in a self-made shack alongside all sorts of animals—pigs, chickens and dogs among them—every action is a matter of survival for the Enache family in the absence of access to the basics of urban conveniences.

In a way, “Acasa, My Home” is a real-world “Leave No Trace,” Debra Granik’s recent American drama about an off-the-grid father and daughter rejecting the conformities of a traditional society. Like in that film, Ciorniciuc opens a non-didactic and non-judgmental window for audiences into an alternative world where parents both nurture their babies within the rules of nature and also deprive them of their vital rights, like safety and education. The kids all seem well-adjusted to the ins and outs of their pastoral way of life however—when the concerned authorities and child services make an appearance, there is routine talk amongst them about hiding in their usual spots.

While those of us equipped with everyday necessities might be inclined to judge the family’s treatment of the wildlife around them, the clan’s actions and existence make sense within the bounds of the reality Ciorniciuc (also one of the cinematographers) rigorously portrays with his elegant, eye-level camera. (It mostly stays put and respectfully detached as the subjects walk in and out of it in an effortless fashion.) But the organic order of things come to an abrupt, almost cruel end for the Enaches when the Romanian government takes a long-planned step to convert the land of their home into a so-called nature preserve. Officials arrive with their orders soon after. And for a brief while, the Enache patriarch receives an artificial sort of respect from them as the land’s former groundskeeper. Somewhere amid the press circus, even Prince Charles makes a short appearance to promote the project that apparently carries some international significance. But the tables turn when social services relocate the family into a crammed home where they’d have to adjust to the rules of a regular community; something Gica had decided to avoid like the plague a long time ago.

Guess who embraces and adopts the charms of the modern world the fastest? Illiterate and isolated until then, the Enache kids (at least most of them) prove to be quick studies. And with his unprecedented, trust-based access to the family for nearly four years, Ciorniciuc captures their transition with such devoted precision. There are blissful haircuts, good old-fashioned school work and much smartphone scrolling in the lives of the Enache kids now; all of which Ciorniciuc films with a keen yet unobtrusive eye while the children replace their parents as key subjects on the foreground.

And yet, this isn’t a rosy story of urban transformation. As the kids—especially the oldest, Vali—reconcile their old lives with the new, grudges rise up to the surface and heartbreaking generational confrontations take place, with some of the young ones admitting to missing the Delta’s sense of freedom and the rest, resenting their parents for not as much as teaching them how to read and write. While the filmmaker tries to neatly bring the complex tale to a close in its final minutes, it feels like a different story takes off at the conclusion of Ciorniciuc’s compact 80-something minutes; one that would encompass new jobs, a newborn, distressingly uncertain prospects, and even higher-than-before stakes in the midst of an unforgiving urban jungle.

Now playing in theaters and in virtual cinemas. 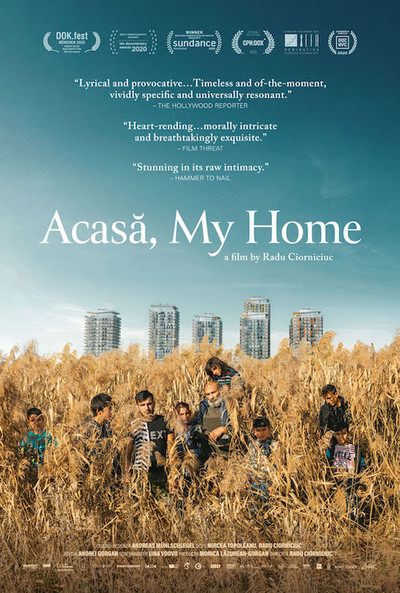