In a note at the beginning of this picture, the premise, which is pretty much identical to the first “ABCs of Death” premise, is laid out: 26 filmmakers were assigned a word beginning with a particular letter and told, more or less, to go and make a horror short based on that word. “They were given complete artistic freedom,” the note continues. I detect a certain pride in this particular assertion. This movie is the work of hardcore genre fans turned moviemakers—one of the producers, Mark Walkow, is in fact an old friend of mine from back in the days of laser discs, and well I remember chatting animatedly with him about disgracefully expurgated versions of latter-day horror classics floating about. Standing behind the most dangerous visions of the filmmakers one commissions is commendable, for sure. There’s a “but” though, and you don’t need to be Einstein or Irving Thalberg or Joseph E. Levine to guess what the “but” involves, and that’s quality control. So this “ABCs of Death” is, either as a result of a surfeit of artistic freedom or just my own narrower-than-the-producers’ strictures of taste, as much of a hit-and-miss affair as the first, which came out in 2012.

It is worth noting that, for this viewer, who is indeed a long time horror fan himself, the spottiness was not the result of a certain mode of repetition that the structure of this omnibus encourages. The titles of the individual episodes are revealed after, rather than before the episodes themselves, which tends to give said titles the quality of punchlines. Now while it’s pretty obvious from the get-go that the “R” episode will be called “Roulette,” in other cases the punchline option is used with great brio, or as a droll formal commentary (as is the case with the “S” episode, directed by Juan Martinez Moreno and my absolute favorite of the bunch). What’s not necessarily unsurprising is that the gimmick doesn’t get as old as you’d figure given its iteration. So that’s good. And while early on one feels that the brevity required to get 26 short films into a two-hour slot is likely to impose a samey abstraction on the proceedings, that doesn’t happen either. Each filmmaker takes his or her ball and makes the most out of it.

What results is a survey of what’s both glorious or at least intriguing about the directions in contemporary horror, and what’s problematic as well. Often at the same time. For instance, in the aforementioned Juan Martinez Moreno episode, a home-invasion tale distinguished by really virtuosic multi-screen manipulations of cinematic space and genuinely excruciating tension, the ghastly pause to take in the full measure of a GAPING HEAD WOUND does—not to sound like your grandfather who remembers back when movies could be scary without all the gore—feel a little gratuitous. A certain aspect of The Larger Problem With Contemporary Horror is actually addressed in the next film, the “T” episode, a bracing and refreshingly snide—and icky—feminist observation from tyros Jen and Sylvia Soska. Little thematic fillips of this sort help make the stretch from “S” to “W” maybe the strongest of the whole feature, and the streak is broken with a blindingly obvious “X” that’s surprisingly by “Inside” maestro Julien Maury, who’s defeated by getting too cute. I suppose in a cultural environment in which the word “misogynist” is applied to all manner of cultural material with less than perfect discrimination, the final episode actually achieves this state, and does so while trying to one-up an infamous sequence from an infamous Lucio Fulci movie. Points for grandstanding here go to director Chris Nash, whose name is likely to make me get up and run the other way from hereon in. (I know, I’m giving short shrift to “Y” here, which is the directorial debut of veteran Japanese makeup-effects artist Soichi Umezawa. And is a little better than OK.)

Genre fans will I suppose understand me well when I say that while I might have only fully enjoyed fewer than half the entries in this film, I am eager to see the next installment. 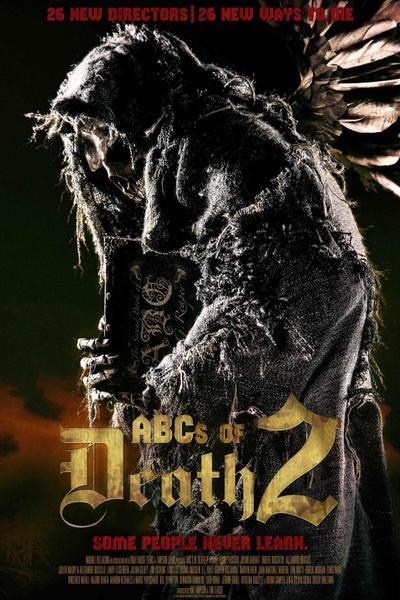