Critics frequently deemed the late French director Eric Rohmer (he died in 2010, at age 89) an "arthouse favorite," but sometimes the American arthouse, or the exhibitors who serviced it, shunned him. In the 1990s, U.S. fans of Rohmer could enjoy only three of his "Tales of Four Seasons," those set in Winter, Spring, and Autumn (the Autumn entry was singled out for particular praise, and to my recollection got the widest distribution). Rohmer didn’t skip summer, but for some reason his tale of that season never made it here.

Until now. The 1996 "A Summer’s Tale" gets its official U.S. release today, and having a heretofore-unseen work by Rohmer in a movie theatre is as salutary as basking in a ray of June sunshine. Like many of his later pictures, this is a story of the romantic foibles of some attractive, self-conscious, but hardly self-aware young adults. Rohmer had an almost uncanny knack for using the mercurial predilections of the young as a launching pad for smart but not oppressive philosophical observations. Here, he tackles the age-old question once articulated by the Loving Spoonful as "Did You Ever Have To Make Up Your Mind?"

Gaspard (stick-thin, curly-haired Melvil Poupaud) arrives for his summer holiday at a beach town in the North of France, and doesn’t do much of anything for a few days. Indeed, the movie itself unfolds at a remarkably languorous pace, title cards drolly marking the passing of days as shy Gaspard meets a cute waitress named Margot (Amanda Langlet, all grown up since she played the title girl in Rohmer’s 1983 "Pauline At The Beach"), stays in his flat playing guitar, strolls on the beach and waits for a phone call. Hanging out with Margot, he discusses his enthusiasm for the music of the sea —"Two of the big trends at the moment are Celtic rock and sailor rock," he observes to her—and she tells him of her studies in ethnology. Margot’s attempts to draw Gaspard out make her seem flirtatious, but maybe that’s not the case; in any event, Gaspard has a girlfriend, Lena, whom he was hoping to meet up with on this sojourn, but she seems to have lost the thread re their rendezvous. So, after rebuffing a tentative advance from the shy Gaspard, Margot encourages him to pursue the vivacious Solene (Gwenaëlle Simon), which he does, with no small success. ("You might not think so but I do have principles," the bossy but game young woman assures him in one of the movie’s more disarming exchanges.) Gaspard's success seems to make Margot irritatedly jealous. And then, what else, Lena (Aurelia Nolin) saunters into town. Gaspard, who started his vacation with no love interest, now has three.

As Gaspard tries to juggle his girls, he fails to perceive that he’s sinking into the quicksand of little white lies. And the more confident he gets, the more insufferable he becomes. Looking at the picture’s mostly sun-drenched and drolly cheerful surface layer, one marvels at Rohmer’s unerring sense of what drama kings and queens young people can be. But not too far below that surface is an ironic parable about how people, regardless of their age, use their romantic lives to construct their self-images. The deus ex machina that delivers Gaspard from having to face up to his mistakes (sort of) is both entirely apt and rather hilarious, and will resonate with contemporary hipsters and those who are familiar with them, despite the movie being almost 20 years old itself. Some tropes never go out of style. 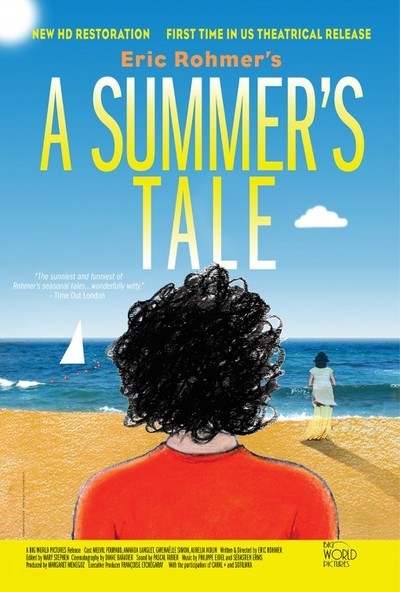 Aimé Lefèvre as The Newfoundlander