Gay characters didn’t openly make an appearance in Penny Marshall’s celebrated feminist sports film, “A League of Their Own,” centered on the All-American Girls Professional Baseball League of the ‘40s and ‘50s. But there obviously were lesbian players in the league, as well as same-sex couples buried within the depths of the stories that helped inspired the film. Among those accounts is the real-life tale of Terry Donahue and Pat Henschel, with their romantic saga told in Chris Bolan’s moving documentary “A Secret Love.” Even though the devotion between Terry and Pat has defiantly spanned seven decades, the two women hid their union from almost everyone around them, even some of those nearest and dearest to the couple. There is no crying in baseball, but you might just be reduced to a puddle of tears while watching Bolan’s film, which finally brings the duo’s love out of the shadows and gives it a long-overdue chance to shine.

This premise alone is instantly winsome and heart-swelling, but there is a lot more to the crowd-pleasing “A Secret Love,” which was set to premiere at this year's canceled SXSW Film Festival, than the couple finally confessing to their togetherness and celebrating their lasting commitment to each other out in the open. A chief aspect of the yarn is the pair’s old age and preparations for what’s likely to be the final chapter of their lives, threatened by flailing health. The resulting fuse is the best kind of cinematic scrap-booking. On one hand, there is a wealth of archival material—nostalgia-inducing photographs, grainy home movies, newspaper clippings—at the disposal of the director, who is among Terry’s great nephews and therefore, personally invested in undoing the homophobic erasure his great aunt was subjected to. On the other, there are the present-day realities the Illinois-based couple has to come to terms with and agree upon. And the setbacks are plenty—with the progression of Terry’s Parkinson's disease, her family puts gentle pressure on the duo to return to Canada, where the two women are originally from. But is that the right move for the unwilling Pat, to go back to the conservative circle she had left behind long ago?

With the captivating backdrop the two women’s joint history seen from this side of the marriage equality movement, Bolan dismantles these personal and familial hurdles with thoughtful touches and intimately captured moments, aided by Duncan Thum’s aptly sentimental score and the well-structured editing of Bernadine Colish. What he reveals during the course is two individuals both tenderly caring for each other and trying to reconcile the safe and fulfilling life they have cautiously and painstakingly built for themselves, with a desire to evolve into a more practical existence in the future. This brings along a number of decisions that need to made around a more manageable home—perhaps even a nursing home where they would be the only gay couple—, closer proximity to kin they can rely on (like Terry’s supportive and accepting niece Diana), and finally making their union official by law through a wedding ceremony, after decades of hiding from prying eyes and claiming they are one another’s cousin.

In the end, this is a love-conquers-all story, with everything taking a backseat when Terry and Pat exchange rings in front of a teary-eyed crowd and witness both the culture and law finally catch up with their needs and desires, albeit belatedly. The effect is at once stirring and powerful, like seeing the Oscar-winning Doris Day song (which gives the film its title and receives prominent treatment by the filmmaker) come alive before our eyes: “At last my heart's an open door. And my secret love is no secret anymore.” 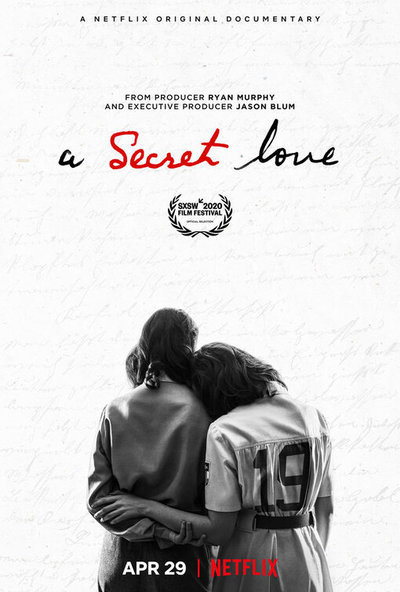 Terry Donahue as herself

Pat Henschel as herself