A Night in Old Mexico

Red Bovie (Robert Duvall) is a cranky old curmudgeon, long estranged from his son. He is being forced out of his home by a developer who is going to create "ranchettes" on the old family ranch in Texas. Red is bitter, rude, and irascible. If he wasn't played by Robert Duvall, you wouldn't want to spend any time in his presence whatsoever. Even still, "A Night in Old Mexico," directed by Emilio Aragon and written by "Lonesome Dove" writer Bill Wittliff, is pretty tough going. Duvall is one of our finest actors and he dominates the screen, even in the simplest moments: the small laughs to himself, the murmured asides, the squinting of his eyes as he assesses a situation. He's riveting. But to what purpose? The film is cliched and phony, the coincidences beggar belief, and the human relationships come from a very tired playbook. Duvall can justify it all, he's just that kind of actor, but "A Night in Old Mexico" hasn't worked hard enough to give him a story worthy of his talents. In many cases, he is acting all alone up there.

"A Night in Old Mexico" tells the story of Red Bovie's last hurrah in Mexico. He has fled from the scene of his depressing new digs, a dusty trailer park, dragging along his city-boy grandson Gally (Jeremy Irvine), who just happens to show up unannounced at the very moment of Red's eviction. Red wants to go to Mexico, get drunk and find a woman for the night. The old boy's still got some kick in him! Along the way, they pick up two guys who (coincidentally) have just double-crossed a Mexican gangster and are carrying a bag full of cash. Red eventually kicks them out of the car but the bag is left behind.

Red walks through the crowded streets of Mexico with a spring in his step, girl-watching and saying hello to everyone, with Gally being prudish and judgmental at his side, exclaiming in horror at one point, "This is a house of prostitution!" Jeremy Irvine, as Gally, is in over his head as an actor. His responses to Duvall range from "annoyed" to "a little bit more annoyed" to "really super annoyed." The emotional journey of the grandson, who is looking to re-connect with his country roots and get to know his grandfather, is certainly present in Wittliff's script, but Irvine plays it on a skin-deep level. He can't hold his own with Duvall, and in some of the larger confrontation scenes, he almost visibly flails for a handhold. You hear that great actors like Duvall can make less experienced actors rise to their level through the sheer force of their own talent, but that has not happened for Irvine. He is strictly one note.

Red and Gally meander through Mexico as various bad guys close in on them, looking to get the money back. Along the way, they pick up a stripper named Patty Wafers (Angie Cepeda), a tough-talking girl who takes a shine to Red because he dances with her and makes her laugh. It is a testament to Cepeda's talent that she makes this work. She says to Gally later that Red "saw me for me," even if it is not what is portrayed on screen at all. Red was leering at her just like every other guy in the joint. The only difference is that he's, you know, Robert Duvall. "A Night in Old Mexico" is so in love with Duvall that it doesn't do the necessary work to make any of this believable. 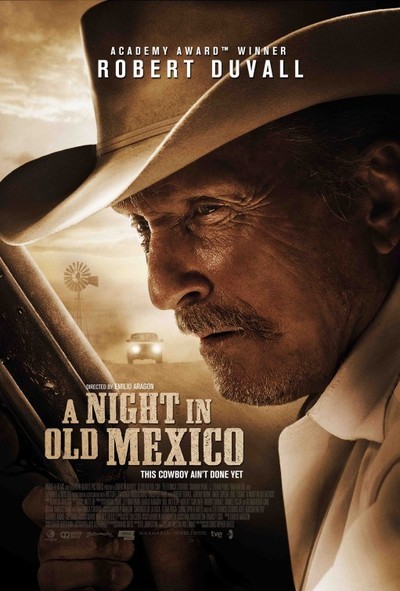 Eric A. Williams as Ramond