A Most Wanted Man

Anton Corbijn’s “A Most Wanted Man” has an added and perhaps unwanted gravity by virtue of forever bearing the title of “The Last Leading Role of Philip Seymour Hoffman.” Watching one of the great American actors embody his final leading man gives the entire piece the air of a haunting, particularly because PSH’s character is such a world-weary, melancholic guy, someone who seems to be out of time and patience. It has been difficult to sever the truth of cinema’s loss from his characters when watching Hoffman’s work since his passing but this is the only time in which it feels like his tragic death has actually changed the final product (it was somehow easier to get past in "God’s Pocket," the "Capote" screening at Ebertfest and I imagine it will be in "Mockingjay" later this year). Corbijn keeps the action of "A Most Wanted Man" at arms length or greater, never finding the heart of the piece despite mostly solid performances and strong production values. He allows us to stay disengaged from the narrative itself and to be distracted by how much the movie world has lost.

Hoffman plays Gunther Bachmann, a man trapped in bureaucracy and shackled by a government that doesn’t give him the trust or tools he needs to do his job. Bachmann is an intelligence expert in Hamburg, Germany, a place that will never be the same in terms of espionage because it served as the home base for the 9/11 hijackers. How did the entire intelligence community there not see that coming? Since that fateful day, Bachmann and his team (which includes Daniel Bruhl and Nina Hoss) have been forced to work on an ever-shifting landscape. The government wants to hammer down on any nail that looks out of place but Bachmann knows that it’s the long, patient game that reaps the biggest rewards in the world of espionage.

Bachmann stumbles upon one of the biggest cases of his career when a Russian man named Issa Karpov (Grigoriy Dobrygin) arrives in Hamburg, seeking asylum and his notoriously evil father’s massive fortune. Issa is a half-Chechen, half-Russian Muslim, a title that raises every possible red flag in the eyes of Bachmann’s team and those above him. Bachmann’s superiors want to grab Issa immediately. Bachmann knows that finding out why Issa arrived in Hamburg is more important than just capturing him. So the follow game begins.

Issa tracks down a banker (the always-effective Willem Dafoe), seeking his father’s dirty money. He also forms a friendship with a human rights activist named Annabel Richter played hollowly by Rachel McAdams, who ends up an important cog in Le Carre’s machine, as do a CIA operative played by Robin Wright and a suspicious Muslim leader played by Homayoun Ershadi. As in "Tinker Tailor Soldier Spy" and "The Constant Gardener," everyone has a role to play in the spy game. And it’s remarkable how much tension Le Carre can draw without much violence or traditional action at all. In "A Most Wanted Man," every decision, every admittance, every secret revealed or held can collapse the house of cards that Bachmann needs to stay upright to stop another 9/11. It is a vision of the spy game as one of neverending frustrations and roadblocks.

It is also a cold, distant film; more than it needed to be. “Constant Gardner” and “Tinker Tailor” drew audiences into their complex world through their relatable characters, mostly the pair played so expertly by Rachel Weisz and Gary Oldman, respectively, but Corbijn offers no such channel into “A Most Wanted Man.” There are glimpses of humanity in Hoffman’s staccato German-accented delivery but the problem comes in the dynamic between Annabel and Issa. This should be the heat and emotion of the film, balanced against the cold visual palette that Corbijn and his team have chosen for the rest of it. Amidst the metal of surveillance fans and glass windows of conference rooms in which life and death decisions are being made, there is a tortured, broken soul of a Muslim/Chechen young man looking for anything human to latch on to. Sadly, Corbijn doesn’t seem interested enough in the characters of Issa and Annabel, making both of them mere plot devices.

Anton Corbijn is a detailed, precise filmmaker, a fact that brought a fascinating level of detail to the underrated "The American." Here, his precision plays up Le Carre’s hopelessness in a spy game that one knows will never work out the right way for all parties involved. In today’s world of espionage, someone is always going to lose. It's far from a complete failure but the flaws of “A Most Wanted Man” remind us not of how much humanity and hope we’ve lost internationally since 9/11 but how much we’ve lost by saying goodbye to an incredible actor. 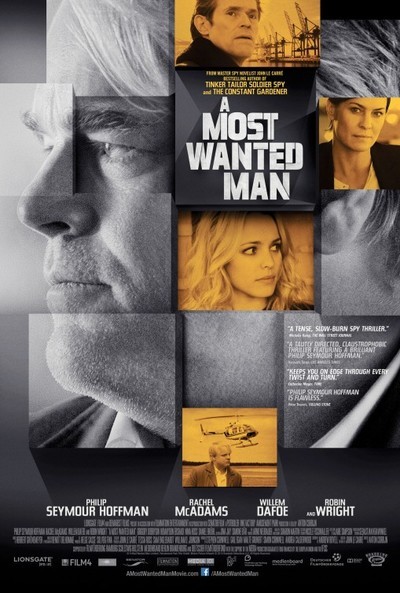