While it doesn’t have any CGI effects (or stirring orchestral music for that matter) to signal this, “A Love Song,” the debut feature from Max Walker-Silverman, takes place in a storybook America. That is, an America in which threat and menace are absent, where folks get along in an easy, considered, practically loping kind of way. Colorado-set, in the middle of a very sparsely populated and largely sere campground, it posits a life of few means and simple pleasures, a life that reveals a thoroughly bittersweet nature as time goes by.

We see its central character, Faye, from behind for the first few minutes. She emerges from a modest trailer hitched to a pickup truck to go grab a basket that’s caught a few crawfish in the lake nearby. She turns on an old transistor radio—Longines Symphonette logo still intact—and twists the dial. (Usually a well-curated bit of Americana emerges.) Dale Dickey, the veteran character actor who plays the role, has a thoroughly-lined face that speaks of hard years behind it.

Faye goes through her day with patience, but it’s clear she’s waiting on someone or something. Opening a calendar, she closes her eyes, circles above it with a magic marker, and when she puts it down on a particular date, she writes in its square “Today.”

In a bit, a little girl with a quarter of cowhands in tow stops by, asking if Faye can move her trailer. Seems that her family’s patriarch is buried somewhere thereabout, and they’d like to dig him up and re-bury him somewhere where the view doesn’t include a newly set-up oil rig, the only visible blot on the landscape. Faye politely says she’s waiting on a visitor who’s coming to this exact spot. The group accepts this and is pleasantly on its way.

Faye also accepts a dinner invitation from a couple, played by Benja K. Thomas and Michelle Wilson, who have Faye over at their nearby campsite and regale her with the story of their consistently postponed engagement, which was to have been proposed a couple of national parks ago on their road trip. Faye clearly envies the couple’s alliance.

Just as Faye is preparing to hit the road, “Today” happens. In the person of Lito, played by Wes Studi. He’s about as garrulous a person as Faye, which is to say, not at all. Nevertheless, their warm but terse conversations fill in bits of their backstory and reveal Faye as having recently been widowed. Lito and Faye go way back—they reminisce about grade school adventures—but it’s not clear if they were ever lovers. This appointment, apparently, was made with a perhaps tacit understanding that the possibility would be explored.

They fall into an almost immediately comfortable exchange, largely through music. Faye explains her radio to Lito: wherever you twist the dial to, where you land, it’ll be playing the perfect song. With his electric guitar, Lito teaches Faye the Michael Hurley song “Be Kind to Me,” and subsequent scenes depict the couple living out that song, along with Lito’s quiet, friendly dog.

And ... that’s kind of it. “A Love Song” is a companionable movie to sit through. It’s well-photographed, unobtrusively edited, full of wondrous sights, and acted by a couple of masters of warm underplaying. One of its final lines is “We’re going to be okay,” and the movie seems to believe this can be true, if we have the wherewithal to live lives as uncomplicated at Lito and Faye do. I’m not sure I myself believe that anymore. If I did, I might have been more moved by this thoroughly decent picture. 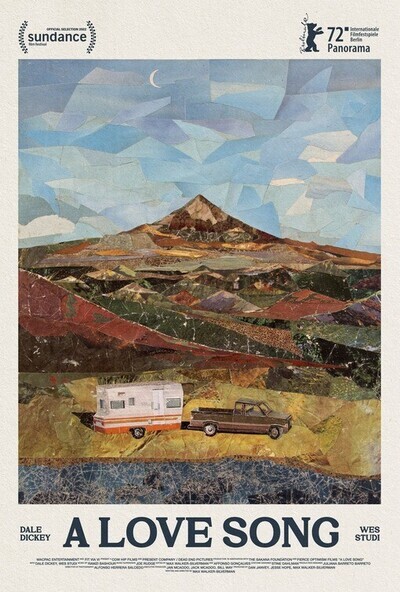