A Gay Girl in Damascus: The Amina Profile

You know what they say: If it sounds too good to be true, it probably is. The blog A Gay Girl in Damascus, which rose to international fame in 2011 before it was revealed as a hoax, was always too good to be true, from the start. It was supposedly written by Amina Arraf, a U.S. citizen living in Syria. She was a lesbian, out to her parents, and provided street-level perspective on the Syrian uprising. The combination of Middle Eastern politics, gender, and sexuality proved irresistible, perfect “bait” for a media hungry for “human interest” stories (as though the fact that the Syrian people were being bludgeoned in the streets was not “human” enough). A group of far-flung journalists (namely, Andy Carvin from NPR, and the guys from Electronic Intifada), as well as real Syrian activists, plus the U.S. State Department (sent on a wild goose-chase for Amina when she was allegedly kidnapped by the Assad regime), brought the hoax to light with a couple of simple fact-checks that should have been done at the get-go. Amina did not exist. The “gay girl” blog was actually written by Tom MacMasters, a white middle-aged guy from Georgia (the U.S. state).

“A Gay Girl in Damascus: The Amina Profile,” directed by Sophie Deraspe, is a compelling and insightful examination of this strange story, and it utilizes the cooperation of Sandra Bagaria, the Canadian woman who had been in a long-distance romantic relationship with Amina (even though the two had never met.) Bagaria tells her own story, but also conducts the various interviews with those who intersected with the fictional Amina. The reality of Sandra, that she was clearly a real woman who existed, was part of the reason the hoax was believed so wholeheartedly. Unlike “Catfish,” which felt like little more than an amateurish directorial stunt, “The Amina Profile” digs into the implications of such a hoax, both emotional and (in this case) political.

The film works in a dreamlike fashion, opening with erotic texts between Amina and Sandra, all as two women in silhouette disrobe slowly, facing one another. Deraspe takes a non-literal approach to the material and it works beautifully, since this is, after all, a story about a collective belief in a fantasy. There are plenty of talking-heads, but the interviews are interspersed with a collage of images, pulling us into the fictional world MacMasters set up. One of the images repeats: A girl walks through the narrow streets and alleys of Damascus, the camera following her, her face never shown. She is a cipher, a faceless figure. She is courageous, she is frightened, she is eager, she is hopeful. She is whatever we want her to be. The visual choices Deraspe makes are effective because one of the experiences of a hoax such as this is that people are drawn into the fiction, as though into a dream. The “girl” figure walking away from us, is Lewis Carroll’s white rabbit, beckoning Alice further and further into the dreamworld.

Who was Tom MacMasters? Why would someone do this? What need was he expressing? The time-commitment alone required for such a hoax is immense. Does he have remorse? Does he understand what he has done? Is he still out there, creating another online persona? "The Amina Profile" is interested in every level of this complex emotionally-fraught story. This is not just the story of the “catfishing” of Sandra Bagaria. Everyone was catfished.

The moment human beings had the ability to interact purely remotely, the desire of some to create fake online personalities (complete, usually, with trauma/disease/constant high drama) proved irresistible. There are too many examples to list, and, except for the emotional havoc wreaked on those who believed they were interacting with a real person, the results are relatively localized. Throngs of people were taken in by the tragic adventures of “Kaycee Nicole”, a young girl with leukemia, before it was revealed that the entire thing was a fiction. Notre Dame linebacker Manti Te’o, more recently, became a media darling because he was devoted to a dying girlfriend, who turned out to be a hoax. Munchausen by Internet is a phenomenon with a million horrible stories attached to it. The cautionary tales proliferate. Don’t believe everything you read on the Internet. People are not who they say they are. These stories are also a critique of our feel-good culture, our love of stories that are "uplifting." We all become dupes in such an unthinking environment.

A Gay Girl in Damascus was similar to these, but different in its scope. While the media was eagerly covering the Gay Girl, real stories of real people in Syria were not being covered. The Gay Girl hoax was used by the Assad regime to discredit the real activists in brutal ways. It was not a victimless hoax. Rami Nakhla, a Syrian activist, tears up at one point, talking about a friend of his from Syria, also gay, also imprisoned, but no one was talking about her at all.“The Amina Profile” questions the appeal of “human interest” stories, especially when they take precedence over real news. Because isn’t any story a “human” story, since it involves human beings? Why did it take a fictional “gay girl” in Damascus to get people interested? One of the byproducts of “The Amina Profile” is that it celebrates those who maintain their critical thinking skills, who refuse to get swept away by a heartwarming narrative. Nobody thanks those people in the moment. On the contrary, they are met with outrage and hurt. How dare you question this wonderful story that makes us all feel good about ourselves?

In response to Tom MacMaster’s statement that along with practicing his “conversational writing skills” he wanted to “give voice” to the real people on the ground in Syria, one of the Syrians interviewed shot back sharply, “We have voices. We can speak for ourselves, thank you very much.” That's the real point. 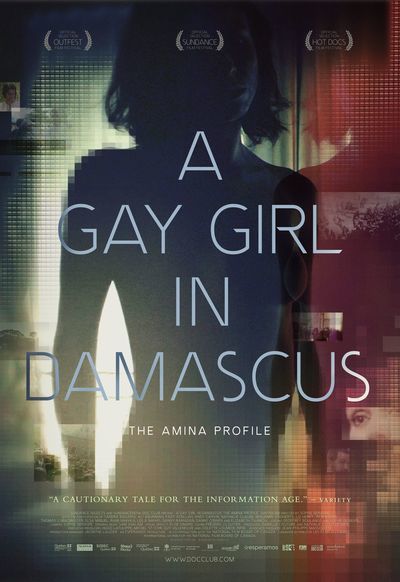