If you’re old enough to remember the 1960s you know that large factions of the youth population in America had a low opinion of the police. Once derided as “the heat” or “the fuzz,” they were now referred to, in some circles, as “pigs.” And this term of address stuck, becoming a staple in hip hop. See Cypress Hill’s 1991 “Pigs” or the immortal 1989 House of Pain couplet “I’m the cream of the crop, I rise to the top/I never eat a pig because a pig is a cop...”

It’s arguable that overall public disdain for cops has never been higher than it is today, with memes like “ACAB” (for “All Cops Are Bastards”), widespread sentiment against the ostensible militarization of police forces, and institutional pushes to “defund” police forces and literally reinvent community crime-prevention methods.

This being the case, at least in the largely-English-speaking sections of North America, parsing the possible agenda of the new Mexican film “A Cop Movie,” directed by Alonso Ruizpalacios, is exceptionally challenging to begin with. As the movie unspools, and the layers of its production become clearer, we understand the challenge is the movie’s entire objective—up to a point.

“A Cop Movie” begins with banal behind-the-dashboard cruising cop car footage, narrated by Teresa, a 34-year-old woman who has 17 years in Mexico City’s police force. This information is repeated a number of times, again with a purpose. On this particular patrol, she’s compelled to assist in a childbirth. Because the precinct isn’t fast enough in sending an actual ambulance to the scene (Teresa informs us she’s never had to do anything like this before) she phones her husband and asks him to phone emergency services as a personal call to get the medics out, and this seems to do the trick. A familiar situational irony, to be sure. But here, we believe we’re watching a movie meant to humanize cops, to show the good they’re called upon to and capable of doing. Teresa is clearly neither a pig nor a bastard.

The movie has a documentary air for a time, but we begin to notice fiction-feature components. There’s brassy, jazzy cop-show style music accompanying some scenes. Teresa actually narrating certain sequences in the cop car as they’re reenacted certainly also tips a hand. Once the movie shifts perspective to another cop, known as “Montoya,” the stylization becomes almost ostentatious, especially in depicting the discomfort Montoya experiences watching over a gay pride parade.

Additionally, while they paint themselves as good cops and detail the pressures and aspirations that led them into policing—both Teresa and Montoya have police in their family, and the details of Teresa’s cop father advising her on departmental sexism are eye-opening if expected—they’re both depicted calmly accepting cash bribes from civilians. Montoya’s rocky life prior to meeting Teresa is depicted in stark terms.

But the movie later breaks character so to speak, and we come to understand that what we’re watching—which leads to Teresa and Montoya partnering in both policing and life and becoming known as “the love patrol”—is a true story being portrayed by actors. The actors themselves speak of their research, surreptitiously entering a police academy for training. Raúl Briones, who plays Montoya, talks openly of his lack of sympathy for cops, and is appalled at the factory-like conditions with which they’re turned out. After six months, he says cadets “are told they’re ready and are handed a gun.”

Eventually we see that Ruizpalacios has put the system to a kind of acid test in treating this case. He gets the viewer positioned by beginning with the humanist angle. In the finale, he introduces the real people behind the characters, and arrives at a proof that’s practically mathematical: this system is broken and it invariably breaks the people in it.

In theaters today. On Netflix on November 5th. 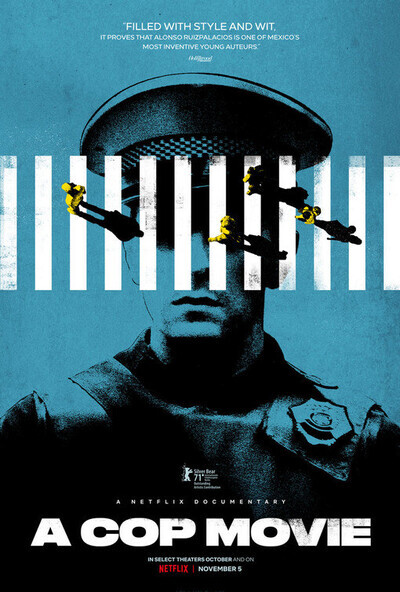