A Choice of Weapons: Inspired by Gordon Parks

In August of 2018, my father was walking through the historic Square in Woodstock, Illinois, when he spotted a film crew setting up a shot outside the local movie theater. ’50s era vehicles filled the parking spaces while various actors in period attire—one dressed in red, another in white—waited on the sidewalk for filming to begin. A sign added just beneath the marquee had a cover ominously draped over it. It wasn’t until two years later, when the first episode of Misha Green’s excellent HBO series “Lovecraft Country” aired that I realized the scene was meant to resemble the chilling snapshot captured by Life Magazine photographer Gordon Parks of an impeccably dressed Black woman, Joanne Wilson, and her niece standing outside a segregated movie house. The harsh neon light of the sign above them reading “COLORED ENTRANCE” mirrors the crimson hue of a dress worn by a white woman in the background.

The great achievement of John Maggio’s latest HBO documentary, “A Choice of Weapons: Inspired by Gordon Parks,” is the depth with which it delves into the nuance of indelible images such as these, which served as both vividly realized slices of life and artfully profound meditations on race. Maggio doesn’t simply gather a line-up of distinguished talking heads to inform us that Parks was important—he shows us why. We learn, for example, that Joanne’s niece had paused by the movie theater because she caught the aroma of the venue’s popcorn, which caused her aunt to become conflicted. As Ava DuVernay points out, Joanne resembles a radiant queen who is panicked by the notion of having to enter through a demeaning doorway. Though Joanne was unhappy with the fact that her shoulder strap had slid down her arm in Parks’ photograph, it’s a detail that magnifies how distracted and unguarded she is in this moment. It’s the vulnerability and humanity that Parks was able to illuminate in his subjects that makes his work as spellbinding today as it was when it was originally lensed.

“A Choice of Weapons” is named after Parks’ own autobiography, in which he detailed his upbringing in Kansas, where he found himself having to be a different person when in the presence of whites, a predicament he captured in his groundbreaking 1969 directorial feature debut, “The Learning Tree.” Encouraged by his mother to find a safer place to live, he toured the country while working as a waiter in the dining car of the Northern Pacific. His piercing and compassionate gaze never failed to find value in the lives of ordinary people, which stripped his subjects of labels such as “criminal,” as noted by DuVernay, who memorably filled the screen with that dehumanizing word in her own essential documentary, “13th.” While under the mentorship of Roy Stryker at the Farm Security Administration, Parks began documenting the life of Ella Watson, the Black cleaning lady at the agency’s offices. His photograph of her standing in front of an American flag as she holds a broom a la Grant Wood’s American Gothic speaks volumes about the mistreatment Watson endures from the country she loves. In another masterfully composed shot, Parks managed to capture four generations of her family in a single image by making exquisite use of framed pictures and mirrors.

Parks displayed enormous versatility during his immortal tenure as “the only Negro cameraman” on the Life Magazine staff. Though the Honorable Elijah Muhammad questioned why Parks would work for the “white devil,” he still allowed him to gain unprecedented access to the Nation of Islam in 1963, resulting in the photographer developing a brotherly connection with another towering icon, Malcolm X. When the pictures he took during this period wound up accompanying fear-mongering text in the magazine, Parks penned his own rebuttal, emerging as an activist. Yet he also saw the art form of photography as a weapon for change, a truth beautifully articulated in Maggio’s film by Ford Foundation president Darren Walker, who believes that once Blacks saw themselves as worthy individuals through Parks’ images, they demanded justice. Likening Parks’ weapon to a “motherf—kin’ bazooka,” Spike Lee made memorable use of the photographer’s Malcolm X portraits at the end of his essential 1992 biopic. Parks also utilized his lens to expose the impact of poverty on an emaciated Brazilian boy, Flavio, whose life was ultimately saved by donations made by readers. Once Parks’ own fame made it difficult for him to acquire the anonymity that enabled him to take candid pictures, he switched his attention to filmmaking and triggered—along with Melvin Van Peebles—the Blaxploitation genre. Editor Richard Lowe includes a priceless bit of archival footage where we see Parks explaining to Isaac Hayes how he envisions the film’s classic opening theme, which ultimately earned Hayes an Oscar.

Maggio’s film is also deeply moving in how it illustrates the ways in which a single life can have an eternal ripple effect throughout the generations, seamlessly blending Parks’ voice with those of the modern day photographers who carry on his legacy. An opening sequence interweaves Parks’ words from a 1966 interview with images of the Black Lives Matter movement. We don’t need to see footage of George Floyd’s murder at the hands of white police officers for the film to make clear how a single shot—in this case, the one bravely taken by Darnella Frazier—can change the world. Just as Parks revealed the human shades of Harlem gang leader Red Jackson, Brooklyn’s Jamel Shabazz seeks to do the same at the Department of Corrections, where he photographs various lives derailed by drugs and a lack of rehabilitation. In West Baltimore, Devin Allen lenses children saved by the coach who keeps them off the streets at a local gym. His images draw inspiration from Parks’ manipulation of shutter speed to capture the movement of Muhammad Ali’s gloves during a boxing match. As for Latoya Ruby Frazier, whose family migrated back to Mississippi as a result of the Flint Water Crisis, her coverage of Michigan’s systemic racism was influenced by Parks’ collaboration with Ralph Ellison, whose manifesto stated that photographs should function as both a document and a symbol. Parks demonstrated this principle in his searing use of color when photographing Mississippi in the months following Emmet Till’s lynching, ensuring that the prejudice he found would be pictured with the immediacy of the present day.

I had hoped the film would have devoted a segment to Parks’ photographs of Lorraine Hansberry’s extraordinary play, A Raisin in the Sun, one of which is spotted only over the end credits, a sign of just how rich this man’s life was. Watching the film, I couldn’t help being reminded of the emerging filmmakers whose work was recently showcased in the inaugural No Malice Film Contest, for which I served as a judge. All of the young people who participated are disciples of Parks in how they seek to enlighten others by conveying the truth of their experience. 19-year-old Kenya Apongule, whose 1st place winner, “Hush,” ranks among the best films, short or otherwise, I’ve seen all year, embraces multiple mediums as Parks did—photography, dance and astonishing spoken word poetry—to convey the struggle and exhaustion of being a Black woman in America. At the awards ceremony, Apongule spoke of how we must prevent history from repeating itself “because 400 years is way too long to keep repeating these same habits, the same racism, the same bigotry.” Parks would undoubtedly agree that she has chosen her weapon well. 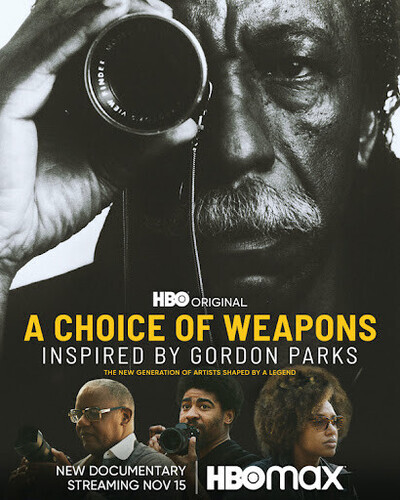 A Choice of Weapons: Inspired by Gordon Parks (2021)

Ava DuVernay as Self

Spike Lee as Self

Kareem Abdul-Jabbar as Self

Anderson Cooper as Self

Bryan Stevenson as Self

Nelson George as Self

Richard Roundtree as Self

LaToya Ruby Frazier as Self