A Bride for Rip Van Winkle

Watching the film, I found myself often admiring writer/director Shunji Iwai ("All About Lily Chou-Chou," "Vampire") for orchestrating an ambitious, and consistently engaging story about a deeply alienated school teacher who is repeatedly gas-lit by a creepy, alluring stranger. I was also so disturbed by this film that I felt I had to rewatch certain scenes just to confirm that the emotional exhaustion I experienced while watching it wasn't just a personal preference, but rather a problem I had with what Iwai and his collaborators do in the film.

Still, after turning over "A Bride for Rip Van Winkle" a couple of times in my head, and sleeping on it, I must say: the experience of watching this anti-climactic three-hour drama is unproductively depressing, and upsetting. That's partly because Iwai is so invested in introducing unexpected plot twists, and reversals of fortune that he never meaningfully expands on the film's seeming fixation with love in the the time of the Information Age. The best thing I can say about "A Bride for Rip Van Winkle" is that Iwai worked me over thoroughly.

Iwai lands his heaviest body blows during his film's first of three hours. At this point, "A Bride for Rip Van Winkle" is a dreary, but mostly compelling drama about the perils of social media, and role-playing. Painfully shy school teacher Nanami (Haru Kuroki) is mercilessly teased by students at work. Her boss doesn't support her, and many of the people in her life, including her family members, talk over her, and/or treat her as if she's invisible. So it's not surprising when she meets her fiancé Tetsuya (Gô Jibiki) through Planet, a lesser-known social media website. Or that, when Tetsuya pressures her to invite more family and friends to their wedding, she feels deeply embarrassed.

What is surprising is the rapidity with which Nanami finds and becomes attached to Amuro (Gô Ayano), a shady "fixer"-type factotum who helps Nanami with her wedding predicament by hiring actors to pretend to be her family and friends. Nanami and Amuro's discomfiting relationship gets even more unsettling right after that: she discovers a pair of women's earrings in her bedroom, and consequently pays Amuro to observe Tetsuya, and confirm her suspicions of infidelity. But Amuro, as we soon find out, is responsible for a vast conspiracy to separate Nanami from Tetsuya. Nanami and Amuro's friendship only get weirder, and creepier after this, though it's unclear why.

I found it difficult to get through this first part of "A Bride for Rip Van Winkle," which reminded me of the same unnerving cynicism that defines many of the best films of provocative arthouse dramatists like Lars von Trier, Michael Haneke, and even Sion Sono. But I found it harder still to progress past this point. We are, early on, gifted with a revelation that Nanami never receives: Amuro is playing with her, and every major event in her life after she meets Tetsuya is, in some way, orchestrated, or overseen by Amuro. But Nanami never seems aware, or interested in the myriad little coincidences, and odd changes in her life. What does she think about the fact that her circle of friends shrinks until it only include speople that Amuro introduces her to? How does she feel when she winds up living in a hotel because of his actions? And why doesn't she stop herself from becoming dependent on him for work, and companionship?

The answer to all of these questions seems to be a matter of perspective. Maybe Amuro is the personification of the shadowy, inescapable role that social media now plays in many of our lives. I guess he's like Facebook or Twitter in that he also encourages random acts of role-playing, and instantly normalizes alienation for the sake of greater social freedom. But no, wait, hang on: why then isn't Nanami's dependence on him the focus of the film? What exactly does it say about Nanami that she just gives so much of herself away without any consequences, or sign of introspective concern, or failure? And why, if this film is intended to be viewed as an allegory, does everything look so flat, and color-less? What does Iwai's mix of "mundane" style, and allegorical content actually say, or accomplish?

I left "A Bride for Rip Van Winkle" feeling like a group of talented filmmakers had taken advantage of me. Iwai's vision is so hyper-specific that I didn't recognize any truth, or reality in it. I am certain of a couple things though. I know that this movie made me feel bad. I suspect it's not a film I'm going to forget any time soon. And I fear that, every time I want to get closer to its mysteries, I'll realize that there's not much more to what's going on beyond its lavishly constructed, but substantially bewildering narrative. Nanami loses herself more and more as "A Bride of Rip Van Winkle" unfolds. You might also want to take a chance, and follow her for three hours. But I cant really recommend the experience. 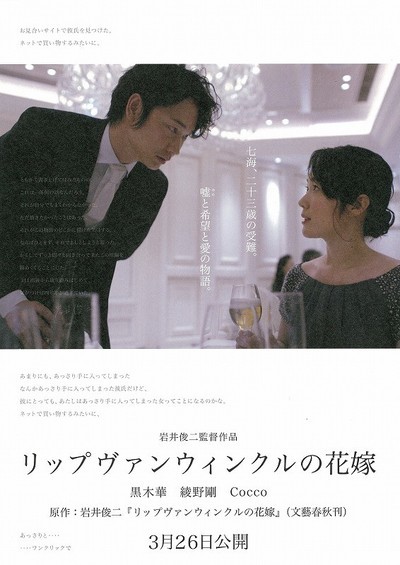