“A Boy Called Christmas” is a resplendent Santa Claus origin story with a star-filled cast, sumptuous visuals, and some melancholy details to keep it from being too sugary.

Dame Maggie Smith plays the vinegary Aunt Ruth, a last-minute babysitter for three children who are still in mourning for their mother. It is Christmas Eve, but their father Matt (Joel Fry), sad and distracted, has decided they will skip the holiday this year. There will be no decorations or presents. After he leaves for a work emergency, Aunt Ruth begins to tell the children a story about a boy named Nikolas (Henry Lawfull), who lived a long time ago in a remote mountain cabin in Finland with his father, a woodcutter named Joel (Michiel Huisman). Nikolas, too, is in mourning for his late mother, who was killed by a bear, and each night he asks his father to tell him the story she used to tell, about a little girl who got lost in the woods one winter and happened upon a community of elves who loved and protected her until the spring thaw made it possible to go home, “her pockets full of chocolates.”

Nikolas has just one toy, a doll his mother made him from a turnip. And he has one friend, a mouse he names Miika and tries to teach how to talk.

The king (Jim Broadbent) calls in his most loyal subjects, including Joel, to give them a challenge. He wants to bring hope back to his people, and he wants each of them to go off on a quest to find it. Joel joins a group to try to find the elves, just in case it's not a fairy tale. Like Matt, he leaves an aunt in charge. But Aunt Charlotte (look past the bad teeth and you will recognize Kristen Wiig) is not one to tell a cozy bedtime story. She’s not even one to provide food or let Nikolas sleep inside the cabin. She is selfish and mean. When Nikolas discovers a clue to the location of Elfhelm, he and Miika (wittily voiced by Stephen Merchant) go off in search of his father to help him find it.

Their search turns into a magical adventure through snowy mountains, with challenges both natural and fantastic. Nikolas helps a reindeer and names him after Lake Blitzen. He also has a scary encounter with a troll and a less scary one with a winged pixie who can only tell the truth and likes to set off colorful little explosives. That is the origin of the British custom of Christmas crackers that make a little pop when you pull the tab and then they open up to reveal paper hats and ridiculously silly jokes.

Elfhelm, as led by a tyrannical Mother Vodal (Sally Hawkins), is troubled. It's no longer the merry, generous place it once was because strangers they welcomed betrayed them. Nikolas will learn some painful and difficult lessons as we see the origins of many Christmas customs, but he always responds to challenges with kindness and integrity.

The lushness of the Dario Marianelli score and the visual scope and detail from production designer Gary Williamson give "A Boy Called Christmas" a genuine sense of enchantment. The film also has delicate animation that illustrates Joel’s bedtime story about Elfhelm and the gentle transitions from Aunt Ruth and the children to Nikolas’ adventures. There are a few sly references to familiar issues with a group called The Resistance to challenge Mother Vodal’s panicked despotism. And there’s the king’s rhetorical question to his subjects about what would give them a better life. They make a few tentative suggestions like "health care" and "a living wage," but he insists that the answer is a quest for “hope,” even one where “most of you will die.”

Lawfull brings sweetness and conviction to his interactions with various CGI creatures, but he's at his best with Zoe Margaret Colletti, who has appealing sparkle as the mischievous Truth Pixie. There are some sad moments, including a redemptive sacrifice, consistent with the fairy tale traditions of real stakes that make the moments of joy meaningful. Children will enjoy spotting the origins of many Christmas traditions, but what will stay with them is the message of kindness, courage, and as Aunt Ruth explains, the stories that hold the universe together. 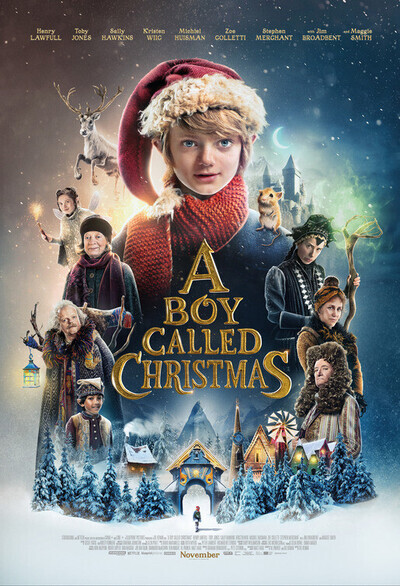 Sally Hawkins as Mother Something

Zoe Colletti as The Truth Pixie