A rumble of thunder, the whir of a blender, a sputtering cough, the patter of rain.

Director Ruth Paxton puts you on edge from the beginning in “A Banquet,” and holds that unsettling mood throughout. But because the sound design is so vivid and Paxton’s eye for disturbing detail is so creative, it’s even more frustrating that the payoff is so unsatisfying.

The Scottish filmmaker’s debut feature is an intimate piece of psychological horror, filled with simple yet powerful jolts. But it feels unfocused as it juggles themes of grief, isolation, adolescence, and body issues. And once we realize what’s really going on here—and how literal the revelations are—it’s ultimately a bit of a letdown.

Paxton gets committed performances from her predominantly female cast, though, led by a steely Sienna Guillory. She stars as Holly, the recently widowed mother of two teenage girls. Betsey (Jessica Alexander) is a senior in high school with no university plans and no great passion pushing her in any direction. Her younger sister, Isabelle (Ruby Stokes), is similarly uninspired, and can barely muster the enthusiasm for her regular ice skating lessons. (Having several scenes take place at a chilly, nearly empty rink provides a natural feeling of unease.) They all still live in the family’s cavernous, minimalist house, but they barely interact.

Their quiet detachment gets shaken up, though, when Betsey attends a party with her classmates and sorta-boyfriend, Dominic (Kaine Zajaz). While standing alone on the patio smoking a cigarette, she feels a force beckoning her into the woods under a blood-red moon. From that point on, she’s transformed: driven by a newfound purpose in which her body is a vessel for some vaguely cataclysmic future event. And part of this drastic change is a refusal to eat. Paxton cranks up the volume on mundane, mealtime tasks to heighten the sense of dread, whether it’s grinding pepper over a piece of avocado toast or scraping peas off a plate. She also favors extreme close-ups of mouths, tongues, and eyeballs, turning basic facial features into alien creatures.

Eating disorders are all too common in pretty, privileged young women like Betsey, a fact that Holly perceptively points out in a moment of anger. Her raw nerves become visceral; she’s held it together for this long, and now her teenager is pushing her to the edge of snapping, which Guillory reveals in subtle, steadily building ways. But there’s something else going on here besides the usual mother-daughter friction, and the curiosity about what that something else might be in Justin Bull’s script keeps us hanging on, at least for a while. From nightmarish body horror that’ll make you squirm to standard exorcism imagery you’ve seen before, the possibilities abound, luring us down various narrative avenues and trying to keep us guessing. But rather than offering red herrings to perpetuate the mystery of Betsey’s transformation, it almost feels as if Paxton and Bull were casting about, throwing various theories against a wall to see what would stick.

The arrival of the great Lindsay Duncan works wonders to liven up this story when it threatens to stagnate. She plays Holly’s mum, June—at first, a source of anxiety over the phone, and eventually the no-nonsense voice of reason no one wants to hear. Duncan conveys so much with the penetrating stillness of her blue-eyed gaze. One particularly gripping scene between June and Betsey changes everything we think we know about these characters and the family as a whole. And yet, this is another example of the unfulfilled promise that prevails throughout “A Banquet.”

Whatever we’re imagining the deal is in our minds is probably far more interesting than what it ends up being. Leaving matters intentionally ambiguous actually would have been provided a far more powerful conclusion. But there’s enough voice and craft at play here to make you hungry for whatever Paxton might serve up next. 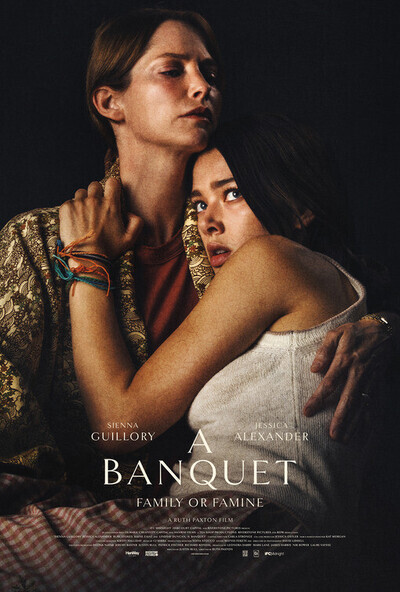